The head of Chorus Aviation Inc. is playing down questions about how the sale of Bombardier Inc.’s CRJ Series aircraft will affect the company’s leasing business, which continued to make strides last quarter.

Joe Randell noted Tuesday that Mitsubishi Heavy Industries Ltd., which bought the floundering regional jet program from Bombardier in June, scooped up the maintenance and marketing activities for the CRJ – though not its manufacturing operations – as part of the $550-million deal.

“It’s fully supported by Mitsubishi, and I think that will be the case for decades in the future,” Mr. Randell said on a conference call with investors.

Chorus, which leases planes across the globe and provides regional service for Air Canada, signed an agreement in February for nine more CRJs.

The nine regional jets will join the five CRJs already under lease to Air Canada via Chorus subsidiary Jazz Aviation LP, which inked a deal earlier this year to continue to provide Canada’s biggest airline with regional service through to 2035.

“Our contracted leasing revenues for the CRJs are actually pretty healthy and long-term,” Mr. Randell said. “It’s primarily in North America, but we’re not at all panicked about the residual value at this time.”

Chorus continued to expand its leasing business last quarter, announcing new transactions on 11 planes to bring its portfolio – excluding Air Canada – to 56 aircraft. The portfolio is valued at US$1.1-billion, on top of future contracted leasing revenue of about US$815-million.

Mr. Randell stressed Chorus’s leasing inroads and growth potential in Asian markets. Six of the 11 aircraft – all ATR 72s – it secured lease deals for last quarter were for IndiGo, a low-cost Indian airline. The other five planes – Q400 turboprops – will go to Britain-based regional airline Flybe, placing the two carriers among Chorus’s biggest customers aside from Air Canada.

“The growth in the business – the demand for new airplanes in particular – has largely been in Asia,” Mr. Randell said.

Chorus’s regional leasing segment has deals with more than a dozen airlines on all six continents. Forty of the 56 planes in its portfolio have been delivered, and the company expects the vast majority of the rest to take flight by the end of the year.

The agreement with Air Canada in January quelled concerns about the company’s future after Air Canada announced last year it would expand its Rouge fleet and fly the lower-cost airplanes on Canadian regional routes – Jazz’s traditional territory.

“The company’s capital deployment is running ahead of our prior expectations for about 50 aircraft by the end of 2019,” National Bank of Canada analyst Cameron Doerksen said in an investor report.

“Management believes it has additional debt capacity and internally generated cash flows to support further growth in the leasing portfolio at a similar rate – about 20 planes per year – without external equity.”

In its latest quarter, Chorus reported a profit of $38.9-million, boosted by unrealized foreign exchange gains on its long-term debt.

The regional aviation company says the profit for the quarter ended June 30 was up from a profit of $16.2-million in the same quarter last year when it recorded a loss on foreign exchange. 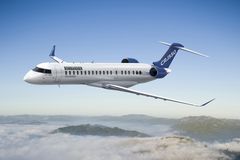