Canada’s largest banks are lowering credit card interest rates for some customers under financial pressure due to the new coronavirus in a move that still seemed unlikely only days ago.

Canadian Imperial Bank of Commerce was the first major bank to announce it will temporarily drop interest rates on personal credit cards to 10.99 per cent for clients who are approved to skip payments. About 80,000 clients have already applied for relief from card payments for up to two months, and the lower rate will be applied retroactively to March 15, the bank said Friday.

Within hours, Royal Bank of Canada and Toronto-Dominion Bank both announced they will reduce credit card interest charges by 50 per cent for those experiencing financial hardship and receiving payment deferrals on cards. National Bank of Canada soon followed, lowering card rates to 10.9 per cent for clients granted deferrals, and promising to compensate customers for extra interest added to deferred mortgage payments – a charge that has proven a sore spot for clients seeking relief.

Late Friday, Bank of Nova Scotia said it will reduce credit card rates to 10.99 per cent for customers receiving minimum payment deferrals on their cards due to COVID-19. It has given payment relief to more than 120,000 clients so far, a spokesperson said.

Over the weekend, Bank of Montreal said it will temporarily offer the same rate of 10.99 per cent to customers receiving credit card payment deferrals due to the impact of the virus.

Desjardins Group, the country’s largest financial co-operative, had said on Thursday that it will reduce interest rates on personal cards to 10.9 per cent automatically for clients who obtain payment deferrals on a financing product.

The moves are an abrupt change of course for Canada’s banks, which were caught flat-footed last week when Prime Minister Justin Trudeau said his government was in talks with financial institutions about credit card interest rates. That same day, the Prime Minister’s staff clarified that he wasn’t specifically calling for cuts to existing credit card rates, but discussing ways to alleviate the burden those rates place on some Canadians.

Banks have mostly moved in lockstep to announce major relief programs, which include payment deferrals on mortgages and other loans as well as interest-free loans for small businesses to be launched next week. But as pressure mounted to give further relief on credit card interest costs to those who are most affected by COVID-19, CIBC acted without waiting for competitors to be ready.

Banks have rushed to roll out sweeping relief programs in recent weeks, and the six largest lenders have granted or begun processing nearly 500,000 requests to defer or skip mortgage payments. The Big Six have collectively deferred payments on more than 10 per cent of the mortgages in their portfolio, according to the Canadian Bankers Association. But they have also faced frustration from many customers who are feeling intense pressure as job losses mount and physical-distancing measures are extended.

“What we’re seeing, because we’re listening to Canadians, is that it’s not enough. There’s still a lot of stress in the system and people feel we need to do more,” Laura Dottori-Attanasio, CIBC’s head of personal and business banking, said in an interview.

Credit card interest “is another area of financial burden for Canadians so we think we should actually do something about it. So that’s really what’s driven this,” she said.

Not everyone will get the lower interest rate. Customers will still have to apply for payment deferrals to qualify, and CIBC’s lower rate does not apply to business credit cards.

However, CIBC is also relaxing terms on a feature launched last fall that allows customers to pay off some credit card purchases on an instalment plan at interest rates of 5.99 to 7.99 per cent. CIBC will refund the usual 1.5-per-cent fee for using the instalment plan until June 30, and lower the minimum eligible purchases to $100, from $250.

Late Thursday, the Canadian Labour Congress launched a campaign to pressure banks to lower interest rates on credit cards, citing rate cuts by the Bank of Canada that have lowered some borrowing costs. Hassan Yussuff, the CLC’s president, still thinks lower rates “should be available to all those who have credit cards."

Cutting interest rates will eat into banks’ profits, but could help control an anticipated spike in loan losses. “Losing a little bit of profitability in the near term is far better than putting a client into bankruptcy, not just from a long-term business and earnings standpoint but also because public relations will be critical as we navigate through the crisis,” said John Aiken, an analyst at Barclays Capital Canada Inc. 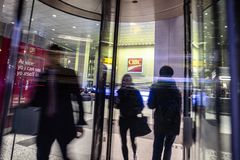 CIBC to temporarily shutter 20 per cent of customer centres in response to COVID-19 pandemic
March 17, 2020