This time last year, Cineplex Inc.’s earnings call had a valedictory tone. On what was supposed to be its last time reporting annual results, analysts congratulated the executive team on a blockbuster $2.2-billion deal to sell the movie-theatre chain and on their years of managing the business.

Now, months after that scuppered deal was supposed to close, Cineplex is looking back on a year in which an unexpected global pandemic has dealt a life-threatening blow to the entire cinema industry. On Thursday, the Toronto-based company reported that 13.1 million people went to the movies in 2020 at Canada’s largest theatre chain. That represents an 80.3-per-cent audience decline, as many of its theatres across the country were forced to close because of COVID-19.

In the last three months of the year, which included what would usually be a busy holiday season, theatre audiences fell 95.3 per cent compared with the year before, to approximately 800,000 visitors. While premium-priced digital rentals of Wonder Woman 1984 did well on the Cineplex Store, the benefit was small compared with having theatres open across the country – including on Boxing Day, generally one of the busiest days of the year.

Chief executive officer Ellis Jacob has said repeatedly that he believes audiences are eager to go back to movie theatres once it is possible for them to do so – and that after months of being urged to stay at home, they will want to go out.

“All of us have been cooped up for too long and we are starved for getting out,” Mr. Jacob said in an interview on Thursday. “… There’s going to be pent-up demand in a big way.”

Approximately 15 per cent of Cineplex’s theatres in Canada are currently open, largely in the Atlantic provinces and Saskatchewan. Theatres west of Saskatchewan remain closed. Two locations in Ontario are set to reopen on Friday in Kingston and Belleville. It is expected that more of its theatres will be allowed to reopen in the coming weeks as Ontario begins to lift restrictions in parts of the province.

In the meantime, Cineplex has negotiated with its lenders for some breathing room. Earlier this week, the company announced that it had amended its credit agreement in order to suspend financial-covenant testing until the fourth quarter of 2021. That new agreement is subject to conditions, including that the company complete a minimum $200-million financing of second lien secured notes by no later than March 31, using the net proceeds to repay debt.

Cineplex has benefited from the Canada Emergency Wage Subsidy to manage payroll costs. The company is also renegotiating relief deals with landlords, who have so far provided Cineplex with flexibility on one of its biggest fixed costs. The company has sold its head office building in Toronto. And it has cut costs, including by cancelling some projects – such as a partnership deal with Dallas-based Topgolf Entertainment Group to open high-tech driving ranges in Canada – and delaying others.

“With all the strategic sales we’ve made and our containment of costs, we will have close to $400-million of liquidity going forward,” Mr. Jacob said.

Hollywood studios have been holding back tentpole movies while theatres in many parts of the United States have been closed as well, but once parts of California and New York begin to reopen, it may spur film releases. That backlog of buzzy movies could help Cineplex to ramp up its attendance, Mr. Jacob predicted, as long as Canada is not too far behind the U.S.

The closest big movie on the slate is Disney’s Black Widow, which is currently scheduled for release on May 7.

“That’s the date that usually kicks off spring-summer,” Mr. Jacob said. “To me, that would be one that I’d see being the catalyst to getting people back, and one of the big guns for the spring-summer period.”

Cineplex’s fourth-quarter revenue was $52.5-million, compared with $443.2-million in the same period the prior year. As many provinces tightened restrictions at the end of the year in response to rising COVID-19 case numbers, many theatres were forced to close. In the three months ended Dec. 31, 2020, the company reported a net loss of $230.4-million or $3.64 a share in the quarter, compared to net earnings of $3.5-million or 6 cents a share in the same quarter the prior year.

Cineplex CEO confident moviegoers will return: ‘All of us have been cooped up for too long’
Subscriber content
February 11, 2021 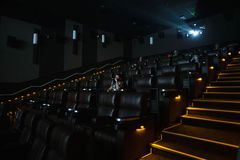 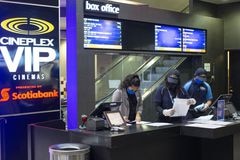 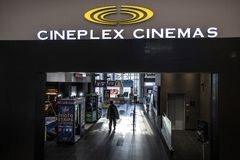