For more than three decades, Cirque du Soleil has delivered its brand of flips and fire-breathing entertainment to audiences in the developed world and beyond. Now, it wants to broaden its appeal to people in emerging countries who couldn’t possibly afford the US$90 average ticket price it charges in its traditional markets.

The Montreal-based circus company on Thursday lifted the curtain on its latest touring show, one created specifically to crack India and other emerging countries where it doesn’t yet have a presence. It’s called Bazzar and, in sum, it’s Big Top on a budget.

“I think the opportunity for us is enormous” with Bazzar, said Finn Taylor, senior vice-president of the Cirque’s touring shows division. “India’s economy is growing year after year. So we wanted to get in now to be able to establish our brand, to get in early before everyone else comes and be able to set a footprint.”

Bazzar is part of a strategic effort by the Cirque to push into new international markets in recent years under the majority ownership of private equity firm TPG Capital Group, which took over control of the troupe in a leveraged buyout in 2015. Although it is already present in a few emerging countries such as China, this is the first time the company has readied a show from scratch to meet specific market conditions: Namely a population with limited financial means and limited space available to set up the show itself.

Those limitations mean that the performance has been scaled down. A typical Cirque big-top touring show tent has a 51-metre diameter. This one will stretch only 41 metres. About 60 to 70 performers and technicians will put on the show, far fewer than the usual 100 to 110. And the audience will be more intimate too, at 1,500 people versus the typical 2,500.

And the cost? Mr. Taylor said he expects that the Cirque’s first patrons in Mumbai will pay US$45 a ticket on average when the show opens in November, roughly half of what you would pay in Europe or North America.

It remains to be seen whether that price point will stick. With its population of 1.2 billion people, India has become a major exporter of information technology services and outsourcing work. But its per capita income remains below the world average.

“India is one of those last big frontiers,” Mr. Taylor said. “Even if we don’t make money the first year, it’s worth us going to be able to establish a very lucrative market in the long run.”

Cirque is currently in talks with stakeholders in Egypt, Algeria and Tunisia to bring Bazzar to the African continent. It is also eyeing performances on the space-constrained Greek islands of Santorini and Mykonos, company officials said.

Moody’s Investors Service expects Cirque’s core business to remain stable as it continues to diversify its operations toward a broader range of performing-arts content and audiences, with single-digit earnings before interest, taxes, depreciation and amortization (EBITDA) growth next year. The company generated revenue of about US$850-million for the 12 months ended April 1 this year, the credit rating company said in a June 12 report.

The circus troupe currently has nine resident shows, including Blue Man Group and NFL Experience, and 12 touring shows. Its founder, Guy Laliberté, retains a 10-per-cent interest in the company.

Details about Bazzar come after the Cirque last week announced plans to open “family entertainment centres” in malls and other retail locations. The spaces will offer shoppers an opportunity to try several circus-inspired activities such as wires, trampolines and aerial parkour. Partnering with real estate firm Ivanhoé Cambridge, Cirque said it will open the first such site in Toronto in September, 2019. 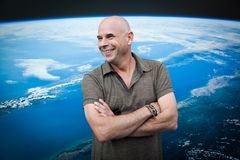 Cirque du Soleil acquires Blue Man Group production company
July 6, 2017
Follow Nicolas Van Praet on Twitter @NickVanPraet
Report an error Editorial code of conduct
Due to technical reasons, we have temporarily removed commenting from our articles. We hope to have this fixed soon. Thank you for your patience. If you are looking to give feedback on our new site, please send it along to feedback@globeandmail.com. If you want to write a letter to the editor, please forward to letters@globeandmail.com.
Comments