A sharply worded letter sent by the head of Canada’s national housing agency has upset many in the senior ranks of mortgage lenders whose business he is trying to win back.

Canada Mortgage and Housing Corp. chief executive officer Evan Siddall fired a broadside this week after his decision to tighten criteria for mortgage insurance this summer led to a precipitous decline in the agency’s market share.

His letter, dated Aug. 10, chastises a long list of prominent mortgage lenders for helping heavily indebted borrowers buy homes, which he argues could harm economic growth. But it is also a plea to banks, credit unions and alternative mortgage lenders to return some business to CMHC that they have diverted to private mortgage insurers that chose not to match the Crown corporation’s tougher standards.

The pointed arguments and blunt tone of the letter, which asks mortgage lenders to “put our country’s long-term outlook ahead of short-term profitability” and cites a “dark economic underbelly to this business,” arrived without warning. Far from having its intended effect, it left some senior bankers puzzled and others bristling, according to multiple sources familiar with the response within the financial sector.

The Globe and Mail is not identifying the sources because their companies are not responding publicly to the letter. Many of those companies do not intend to respond at all, the sources said. The letter was first reported by Bloomberg News, prompting Mr. Siddall to release it publicly.

CMHC announced in early June that it would tighten its standards to qualify for mortgage insurance on July 1, requiring higher credit scores, banning the use of borrowed funds for down payments and creating a firm cap on a borrower’s debt service ratio – which measures the percentage of a borrower’s income required to service their debts. Days earlier, the agency reported first-quarter financial results that included a higher-than-normal loss ratio of 36.5 per cent – which measures losses from claims relative to premiums collected.

Mr. Siddall said in his letter that CMHC chose to tighten its standards because of “economic systemic concerns” that excessive debt levels reduce consumer spending and dampen economic growth. He has been a vocal defender of a mortgage stress test designed to to curb risky lending, and has made gloomy predictions of falling housing prices in Canada since the onset of the coronavirus pandemic.

“These changes were not made because of our current book of mortgage insurance business, rather to maintain its integrity,” said Len Catling, a CMHC spokesperson. “High household indebtedness continues to be a concern and the COVID-19 pandemic has further exposed the long-standing vulnerabilities in our financial markets.”

The new rules made it harder for some borrowers to get CMHC mortgage insurance, and disqualified as much as 30 per cent of the agency’s usual applicant pool, three sources said. Its two competitors, the private mortgage insurers Genworth MI Canada and Canada Guaranty Mortgage Insurance Co., did not alter their underwriting standards, which had been virtually identical.

While CMHC appeared content to forgo some business that it considered a higher risk – from borrowers with credit scores below 680 or high debt service ratios, for example – the agency has also lost a meaningful share of business from home buyers that it deems safer bets. Private insurers taking on more borrowers who don’t meet CMHC’s new standard have, in turn, also asked lenders for a greater share of their other business to balance out risks.

To varying degrees, lenders have agreed with the insurers’ requests. Some have shifted a meaningful share of their insured mortgages to private insurers, multiple sources said. Mr. Siddall said in his letter CMHC is “concerned” about that trend. “I said go ahead and redirect the business we have avoided, but don’t give [the private insurers] more than that,” he wrote on Twitter.

His letter also warned lenders that CMHC is “approaching a level of minimum market share that we require to be able to protect the mortgage market in times of crisis. We require your support to prevent further erosion of our market presence.”

Mortgage insurers do not disclose market share, making it hard to gauge how much ground CMHC has lost to competitors.

Before announcing stricter standards, CMHC held a conference call to brief mortgage lenders and federal Department of Finance officials. The plan was greeted as unorthodox, because it restricted access to mortgages at a moment when governments were pumping tens of billions of dollars into stimulus programs designed to keep credit flowing amid a global public-health crisis.

CMHC “consulted with the Department of Finance as we normally would in matters of housing finance,” Mr. Catling said, but advice to the department is kept confidential.

“The CMHC, as a Crown corporation, has the legislative authority to make policy decisions as it sees fits so as to prevent erosion of the mortgage market. This specific business decision was made independently from the Finance Department,” said Maéva Proteau, press secretary to Finance Minister Bill Morneau, adding that officials “will continue to monitor the situation and respond as necessary.”

Dan Eisner, CEO of Calgary-based mortgage brokerage True North Mortgage, said both Genworth MI and Canada Guaranty “promptly” contacted him after CMHC announced its new criteria and urged him to “send us a complete package of deals,” and not only those that CMHC would no longer approve.

He likened the rationale to other types of insurers that take on both riskier and more stable clients. “They don’t want all the drunk drivers for car insurance,” he said.

Canada Guaranty “takes a measured approach to growing our market share” and has “a dynamic underwriting and risk management framework,” CEO Andy Charles said in an e-mail. A Genworth MI spokesperson did not respond to a request for comment.

Mr. Eisner said it was entirely predictable that CMHC would lose market share as the agency has handed private insurers a competitive advantage. Now Mr. Siddall “is trying to use moral suasion” to pressure lenders and private insurers to follow his lead, Mr. Eisner said. “Evan went out on a limb with this thing and nobody followed.” 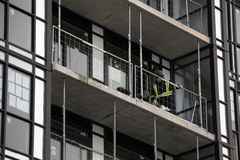 Follow James Bradshaw and Rachelle Younglai on Twitter @jembradshaw @rachyounglai
Report an error Editorial code of conduct
Due to technical reasons, we have temporarily removed commenting from our articles. We hope to have this fixed soon. Thank you for your patience. If you are looking to give feedback on our new site, please send it along to feedback@globeandmail.com. If you want to write a letter to the editor, please forward to letters@globeandmail.com.
Comments