The war of words between Canada’s two big railways heated up on Thursday, as Canadian National Railway Co. accused Canadian Pacific Railway Ltd. of misleading investors in the takeover battle for a U.S. railway.

Both companies are seeking to buy the same carrier, Kansas City Southern , and extend their networks to new markets in the southern United States, Mexico, the Gulf of Mexico and the Pacific Ocean.

In a letter to KCS’c chief executive officer and board of directors, CN CEO JJ Ruest accused CP of not being truthful in its campaign to discredit the Montreal company’s takeover offer.

CN is offering about 20 per cent more than CP for KCS – US$29.9-billion. CP has declined to raise its offer and is instead attempting to raise doubts about CN’s operational acumen and its prospects for winning approval from the U.S. regulator.

In a letter to KCS CEO Pat Ottensmeyer and the Missouri railway’s directors on Thursday, CN’s Mr. Ruest pushed back against those claims. He noted CN’s offer was worth more money, and that the voting trust his company has proposed to hold KCS shares before regulatory approval is granted is identical to the one planned by CP.

CN’s bid for KCS, announced on Tuesday, is an attempt to block the US$25.2-billion deal CP and KCS jointly announced in March. KCS shareholders and then the U.S. Surface Transportation Board would have to approve a cash-and-stock takeover by either Canadian company.

KCS said its board will review CN offer, but has yet to make a decision.

Neither KCS nor CP have set dates for shareholder votes on the takeover. CN shareholders are not required to approve its offer.

Both Canadian railways are using a two-step takeover mechanism long used in the U.S. railway industry known as a voting trust. If shareholders of the target company vote to approve a takeover, the shares are held in trust while the STB reviews the deal’s impact on competition, the public interest and other factors.

The trust is intended to preserve the target’s independence and ensure it continues to serve vital industries during a typically lengthy STB review.

Keith Creel, CP’s top executive, on Wednesday launched a scathing attack on CN and its prospects for winning approval of its trust plan, and the impact on rail customers. He called CN’s higher offer “fool’s gold” that KCS investors would never see, alleging the STB would reject the proposed trust structure and the deal itself.

However, Mr. Ruest noted the CN trust structure is identical to that proposed by CP, and both are likely to be approved. “CP’s deliberately misleading claims to the contrary are not correct,” Mr. Ruest said.

Scotiabank analyst Konark Gupta said CP appears confident its lower offer will succeed “based on its merits. It appears that CP may not be interested in raising the bid,” he said, unless KCS signals its support for CN’s offer.

KCS, the smallest of the big seven railways in North America, offers either Canadian carrier a network that extends south from Missouri to Texas, the Gulf coast and deep into Mexico. The Canadian railways say they want to capitalize on North American free trade, which has shifted the flow goods to north-south from east-west.

CP, which already shares a rail yard with KCS in Kansas City, has received support for its proposal from hundreds of rail customers and other stakeholders. In letters to the STB, the shippers say connecting the two carriers will open new markets and improve service by eliminating train handovers and delays.

CN, which notified the STB of its plan to apply for approval of the proposed takeover on April 20, has received support and opposition from railway customers.

EuroChem North America Corp. said it opposes CN’s plan because both KCS and CN serve ports on the U.S. Gulf of Mexico, and the takeover would lead to a reduction in competition. The North Dakota Grain Dealers Association said it would benefit from the CP-KCS takeover, but opposes the CN-KCS deal. “A CN-KCS combination would do nothing to benefit North Dakota shippers but would instead decrease competition overall,” the group said.

Lottridge Tire and Retreading Inc., an Ontario-based supplier to the rail industry, said it supports CN’s bid for KCS because it would foster growth in north-south trade and offer environmental benefits by replacing truck traffic with an improved rail network. 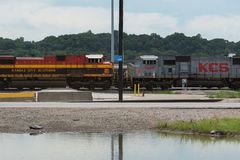 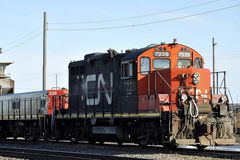 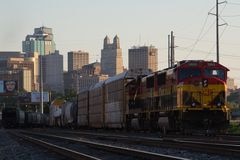