Justin Giovannetti
CALGARY
Published May 8, 2019 Updated May 9, 2019
For Subscribers

The CEO of Canadian National Railway Co. is calling for an end to oil production cuts imposed by the previous Alberta government and says the company expects to ship more crude this year, even if Premier Jason Kenney follows through with an election promise to end a multibillion-dollar oil-by-rail plan.

Jean-Jacques Ruest said CN is investing in new locomotives, crews and track and is prepared for rail shipments to rebound after they dropped precipitously at the beginning of this year in the face of oil production cuts. The cuts have pushed the price of Alberta crude higher, which makes rail shipments less profitable. Both the previous government and the new one have signalled an intention to pull back on those cuts throughout the year.

“If there was a reduction in curtailment, then Alberta will be able to use more rail capacity and get more product to market,” Mr. Ruest told The Globe and Mail.

However, CN and its competitor Canadian Pacific Railway Ltd. could soon find themselves at odds with Alberta’s new government. Mr. Kenney has vowed to scrap a $3.7-billion contract inked by his predecessor with the two railways to move an additional 120,000 barrels of crude oil daily. The first of 4,400 rail cars leased by the Alberta government were planned to start moving some of the province’s oil, largely to U.S. refineries, this summer.

Mr. Ruest declined to provide any details about his company’s contracts with the Alberta government or what penalties the province would face if it tried to cancel them.

Crude-by-rail shipments hit a record level in December, with nearly 354,000 barrels a day moved by Canada’s railways, according to data from the National Energy Board. They have decreased in recent months, largely due to government-mandated oil production cuts that have made rail shipments less profitable as Alberta crude prices increased.

Mr. Kenney’s office said the Premier’s opposition to the oil-by-rail contracts has not changed, but he has not addressed the issue publicly since taking office last week.

“The Premier’s position on oil-by-rail has not changed,” spokeswoman Christine Myatt said in a statement. “Any further comment at this point would be premature.”

The policy was imposed by former premier Rachel Notley’s government with an aim to reduce a massive discount on the price paid for Alberta’s oil. The gap between Alberta’s oil price and international benchmark prices has returned to normal levels since curtailment came in.

The curtailment policy took effect on Jan. 1 and forced the province’s largest producers to cut production by 325,000 b/d, or about 8.7 per cent. Those limits have been relaxed several times and the total size of the cut is currently expected to be 175,000 b/d by June.

Mr. Kenney has called curtailment a “necessary” policy in the past and has said he doesn’t intend to end it early; the current legislation only allows production cutbacks until the end of 2019.

In her new role as Alberta’s Official Opposition Leader, Ms. Notley called on Mr. Kenney to leave the province’s oil-by-rail program in place: “Not only will moving oil-by-railcar clear the backlog, reduce the price differential, save jobs and make a considerable profit, it sends the right signal to investors around the world.”

Michael Dunn, director of institutional research at Calgary’s FirstEnergy Capital Corp., said many in the oil patch are waiting to see whether Mr. Kenney might discover that the costs of cancelling the contracts would be onerous and might balk. The government has so far declined to disclose how much cancelling the contracts would cost. “I’m not convinced with certainty that he might cancel,” Mr. Dunn said.

CN is working on two projects to get Western Canada’s coal and propane to Asian markets. Speaking to the Calgary Chamber of Commerce on Wednesday, Mr. Ruest said the railway’s $700-million capital investment in Alberta over the past two years “is a sign of confidence from CN on the province’s future.” He said the projects, which will see the products shipped from B.C.’s coast to Asian markets, will help Canadian producers get more revenue for natural resources. 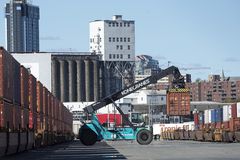 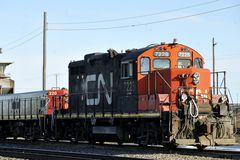 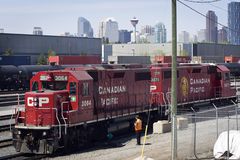