Businesses are braced for a wider impact of a strike at Canadian National Railway Co., as the company and the Teamsters Canada Rail Conference continued to negotiate on a new collective bargaining agreement.

About 3,200 CN train conductors and yard workers walked off the job just past midnight on Tuesday morning, halting shipments of grain, forest products and other freight on Canada’s largest rail network.

“At the moment, none of our issues have been resolved,” said Christopher Monette, a spokesman for the Teamsters.

The conductors and CN have been without a contract since July, and in talks assisted by a federal mediator for several months. The union says the outstanding issues include drug benefits, rest periods and CN’s use of remote controls to drive trains, which the union says is unsafe. A CN spokesman declined to comment on the negotiations

Mark Davis, chief executive officer of Toronto-based ChemTrade Logistics Inc., a maker of industrial chemicals, said the strike will hit the company’s financial results, and force the shutdown of its plants within days, unless the strike ends and rail service resumes.

“If it lasts any length of time, we will be materially affected, as will our customers,” Mr. Davis said by phone.

ChemTrade makes bulk chemicals for pulp mills, petroleum fracking and water treatment. About a dozen of its 64 plants are in Canada. To serve customers and bring in raw materials, trucks are not an option, nor is another railway, given the plants’ locations.

Mr. Davis said the company and its customers prepared for a possible strike by increasing shipments ahead of time, but any stockpiling strategy is limited by available storage. “It’s not just that we can’t get stuff in and out. Even if we could, which we can’t, our customers can’t,” he said, adding, “The sales that you lose during a down period are probably lost forever.”

The CN strike has rattled Canada’s farmers, grain companies, miners, retailers and other industries that rely on railways to reach export terminals and customers. Some groups, including the Alberta provincial government, are urging the federal government to pass legislation that would end the strike. The government, meanwhile, is urging CN and the union to come to an agreement.

The union says safety – not wages – is the major issue in the way of a settlement. The union is asking CN to stop using lone employees to operate trains outside a locomotive using what are known as beltpacks, which allow remote control of the engine.

A CN employee operating a locomotive using a beltpack while hanging on to the side of a moving railcar was killed on Aug. 15 at CN’s MacMillan railyard north of Toronto. The worker died after eight of the rail cars derailed and tipped over.

Canada’s Transportation Safety Board is investigating the incident.

The Teamsters, in a news release outlining the disagreement that spurred the strike, makes no mention of the employee’s death, but says CN has refused to change the “dangerous practice” of remote-controlled operations.

“CN currently requires TCRC members to operate trains alone from outside of the locomotive, hanging on to moving trains with one hand while operating a remotely controlled locomotive with the other,” TCRC said on Nov. 16. “Railroaders are expected to do this in rain and in freezing temperatures, sometimes for distances of up to about 17 miles.”

In June, 2016, a 74-car CN train ran away north of Toronto for about five kilometres at speeds of up to 50 kilometres an hour after the conductor, using a beltpack while standing on the outside platform of the locomotive, was unable to control it. The train eventually came to a stop on its own and there were no injuries or derailments.

CN spokesman Jonathan Abecassis said after the runaway train, CN reviewed and updated braking requirements for all its yards. He declined to answer questions on the August death because it is under investigation. “However, at this time, the TSB has not communicated to CN that [the] beltpack was a contributing factor,” he said.

“No employee is ever asked to work unsafely. Any employee that feels fatigued or has safety concerns has a duty to report it and use alternative means to complete the assigned task safely,” he said.

The TSB says beltpacks allow railways to move trains using yard workers and conductors, rather than engineers, who receive more training and are better qualified and paid.

“The problem is not the technology,” said Faye Ackermans, a TSB board member, presenting the results of the runaway train probe in 2018. Beltpacks have “been around for years, and allow for all sorts of efficiencies, especially in terms of the reduced number of crew required to carry out a job. But this investigation identified gaps between what is mandated by the regulations, and what is required for some employees to do the job safely.”

The union says it is fighting CN’s efforts to make employees work longer shifts and make it harder to take time off. CN is also trying to cap drug benefits, the Teamsters say.

Meanwhile, CN is seeking a court injunction that affects picketing at locations in two cities, Saskatoon and Edmonton, Mr. Monette said, declining to provide more details because the matters are before courts. Both cities are home to CN terminals for cargo containers, a freight category CN said in an internal memo it planned to haul using managers as drivers.

“CN respects its employees’ right to picket peacefully, safely and in a manner that does not disrupt or delay our operations,” said Jonathan Abecassis, a CN spokesman. “We only seek interventions from the authorities when picketing creates safety hazards, interferes with operations or generally breaches the law.” 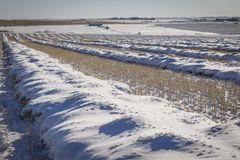 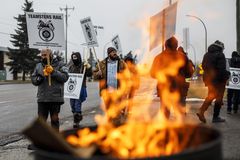 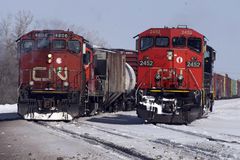