Vancouver entrepreneur and financier Roger Hardy is getting back into the online eyewear business, five years after selling his publicly traded Coastal Contacts Inc. for $430-million.

Mr. Hardy’s investment firm Hardy Capital announced on Wednesday that it has purchased privately held LD Vision Group, a 17-year-old Richmond, B.C.-based company that it described as North America’s second-largest independent direct retailer in eye care through such websites as OptiContacts.com and ContactsExpress.ca. The company, co-founded by president Arshil Abdulla and managed with two of his brothers, had never previously raised outside capital. LD had sales of about $50-million last year and its margin for earnings before interest, tax, depreciation and amortization was in the double digits, Mr. Hardy said.

The exact terms of the deal were not disclosed, but the company confirmed it was a cash-and-stock transaction valuing the company at approximately $70-million.

Mr. Hardy said his firm had been looking to invest in consumer business in the past few years “and the more we looked, the more we sort of saw that optical still has a great opportunity. Customers are still underserved. It was time to see if we could do something in the space.”

Mr. Abdulla in an interview said he and his brothers decided to sell “to take the company to the next level. We just needed to find the right partner that had the know-how and track record to do it.”

Hardy Capital said it plans to announce “broader expansion plans” into the eyewear industry in the coming months. He said LD has been primarily focused on selling contact lenses, offering technology that allows customers to do their own eye tests online in 34 states in the United States, where LD derives about 80 per cent of sales. Mr. Abdulla said the eye test wasn’t yet available in Canada, adding “we can’t really disclose at what stage we’re at.” He added that a recent court ruling in Ontario was “favorable to us and will mean online eye care and eyewear will be more accessible to Canadians.”

"We think this [self-eye-test offering] will be a bit of a game changer,” Mr. Hardy said. "That’s a key piece of this. We found the technology platform these guys have is one of the best-kept secrets in the industry.

The deal follows a previous investment by the Vancouver firm last year in Privé Revaux, a U.S. maker of trendy eyewear targeted at millennials and popularized by such celebrities as Jamie Foxx and Hailee Steinfeld.

After selling Coastal Contacts to Essilor International SA, Mr. Hardy led an unsuccessful foray into the online shoe-selling business, backing and briefly leading Shoes.com Technologies Inc., which shut down and filed for creditor protection in early 2017. He was also on the losing end of a boardroom battle over Vancouver fintech Payfirma Corp., when shareholders voted in October, 2017, to oust him and two other directors over clashing visions for the future of the company, which was sold several months later.

Asked if Mr. Hardy, who served as CEO of Coastal and Shoes, would take on the CEO role at LD, Mr. Abdulla replied that Mr. Hardy had become acting CEO “until we decide what extent he wants to be involved.” Mr. Hardy said his role “is really just to try to stay out of the way of all these great people and try to help them when they get stuck and provide resources whenever they need.”

Hardy Capital’s other investments include real estate development projects in Vancouver and elsewhere in B.C., and venture financing to a range of early-stage companies in North America.

Editor’s note: LD Vision group has a double-digit margin for margin for earnings before interest, tax, depreciation and amortization, Roger Hardy said. An earlier version of this story said the company’s EBITDA were $10-million.

The best workplace recruit may be hiding in plain sight
July 26, 2018

Online retailers buck the trend and set up bricks and mortar stores
July 24, 2015 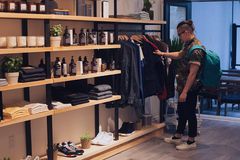