Chick-fil-A Inc., the controversial fast-food chain whose owners have spoken out against gay marriage, plans to expand to Toronto next year.

The Atlanta-based seller of fried chicken, whose corporate purpose begins with “to glorify God,” plans to open 15 locations in the Toronto area over the next five years, with the first three in 2019.

The company is the seventh-biggest fast-food chain in the United States by annual sales. Tim Tassopoulos, Chick-fil-A’s president, said its recent success in places such as Manhattan has underpinned confidence for international expansion. The company wants to use its experience in Toronto as the base for expansion to other countries.

“The best city to kick it off is Toronto,” said Mr. Tassopoulos in an interview. “It’s a global city. It has so many different ethnic groups. Toronto really represents the globe. We feel like it’s a great learning ground for us.”

The company had a failed expansion to South Africa in the 1990s. One Chick-fil-A with a limited menu has operated at the Calgary airport since 2014. In Toronto, there will be a flagship downtown location as well as suburban outlets.

Chick-fil-A is privately owned by the billionaire Cathy family, who are evangelical Southern Baptists. The restaurants do not open on Sundays. In 2012, CEO Dan Cathy spoke out in support of “the biblical definition of the family unit” and protests thereafter included a “kiss-in” where LGBTQ couples expressed their love at Chick-fil-As. Bill de Blasio, mayor of New York City, called for a boycott of the chain when it landed there several years ago.

The furor has not slowed the company. Chick-fil-A has expanded by about 700 restaurants to more than 2,300 since Mr. Cathy’s 2012 comments. Its sales have doubled to about US$9-billion. The first urban Chick-fil-A opened in 2011 in Chicago. It does not have restaurants in Seattle, San Francisco, or Boston – although it has some in the suburbs of those regions. But it has found success in Los Angeles. In New York, it has opened five restaurants since 2015, including its largest location in lower Manhattan this spring.

Of the controversy around Mr. Cathy’s 2012 comments – and the reception Chick-fil-A might see in Toronto, where some people will know its politics better than its food – Mr. Tassopoulos said there has been a “high receptivity” to Chick-fil-A in New York, Chicago, and elsewhere.

“Chick-fil-A’s made the commitment, and always has, to serve everyone. We’re part of the local community, and we reach out to every aspect of the community,” he said.

Operators are not required to be Christian, Mr. Tassopoulos said. “We have people of all faiths that are Chick-fil-A operators and of course our team member community, they’re 100,000 strong, and represent all different views and backgrounds and identities – so, very open.”

Chick-fil-A maintains tight control over its franchises. They cost $15,000 in Canada, far less than other chains, but most investors, dubbed “operators,” can own only one, can’t choose the location, and are required to run the business hands-on and full-time. Operators are heavily screened by extensive interviews, according to a 2007 Forbes feature headlined “The Cult of Chick-fil-A.”

Chick-fil-A describes its franchise model as the company’s secret sauce.

Restaurant industry analyst Robert Carter of NPD Group predicted a positive reception for Chick-fil-A in Toronto, despite past controversies.

“There’s definitely legacy brand issues – but I don’t think that’s going to impact the brand here in Canada,” he said. “That type of controversy has died down.” With 15 restaurants in five years, and given Chick-fil-A’s popularity in the United States, Mr. Carter predicted they will be “extremely busy.”

Mr. Cathy’s 2012 comments were in a story by the Baptist Press, a news service of the Southern Baptist Convention. “We know that [our views] might not be popular with everyone, but thank the Lord, we live in a country where we can share our values and operate on biblical principles,” he said.

In 2013, Mr. Cathy posted on Twitter, in a comment later deleted, that it was a “sad day for our nation” and “founding fathers would be ashamed,” after the Supreme Court made decisions supporting same-sex marriage. Chick-fil-A said it was a personal comment.

In 2014, Mr. Cathy said he had “learned a lot” from the controversy, in an interview with the Atlanta Journal-Constitution. 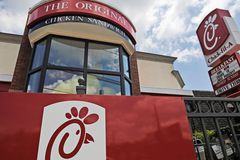 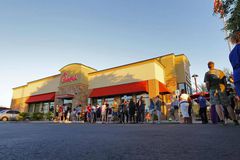 How Chick-fil-A turned a sandwich into a gay marriage statement
August 2, 2012 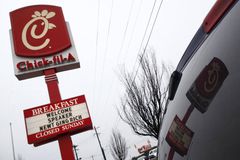