The Laval, Que.-based company, one of the world’s biggest convenience store players, hasn’t made a major acquisition since buying Texas-based CST Brands Inc. for US$4.4-billion in 2017. Last month, Couche-Tard decided to focus on its own business and suspended efforts to take over fuel retailer Caltex Australia Ltd. The fallout of COVID-19 and the rout in global oil prices had made uncertain the target’s prospects and cash flow.

But while visibility “became cloudy” on the merits of a Caltex transaction, other deals will almost certainly present themselves, said Couche-Tard chief executive Brian Hannasch. Takeover multiples, which show what an investor is willing to pay per dollar of earnings, are just one element of a convenience store sector poised for transformation in the months ahead, he said.

“There’s been a lot of cheap money out there, there’s been a lot of private equity [companies] chasing stuff,” Mr. Hannasch said in an interview this week. “I think COVID will change that. I think easy money will be off the table. I believe multiples will be lower. And I believe that some of the smaller companies may need liquidity, or realize that in a post-COVID world – where you’ve got to invest pretty heavily to change the consumer offer and [boost operational capability] – it’s going to be harder. So we’re sitting here with a good cash position. And if there are interesting assets or companies at the right price and the timing makes sense… we’re ready.”

Government-ordered restrictions on public gatherings and movements have ripped into Couche-Tard sales across its global network, even as most of its gas stations and stores have stayed open as essential businesses. The company has affiliates in Asia but does the vast majority of its business in Europe and North America, where it operates under the Circle K and Couche-Tard brands.

Fuel sales declined rapidly during the first few weeks following the stay-at-home orders but stabilized in April and started improving later in the month, Couche-Tard said in a business update this week. However, the company has seen higher profit margins on gasoline as oil prices crashed.

Merchandise sales have also declined over the past two months as shopping traffic slowed. But customers who did come spent more during each visit, which softened the revenue drop, the company said without providing any numbers.

Demand for things like cigarettes, canned goods, pre-packaged sandwiches and cleaning products is up while demand for food prepared in-store is down. The company was caught off guard by a few unexpected things, like shoppers loading up on cases of beer instead of the usual single or six-pack, the CEO said.

Bank of Montreal analyst Peter Sklar estimates that Couche-Tard stores in the United States, its biggest market, experienced a 2-per-cent drop in same-store merchandise sales for its latest quarter. The company’s US$4.3-billion in cash and available credit is “well beyond” what’s needed to weather any pandemic scenario, the analyst said. Couche is scheduled to report fourth-quarter results next month.

“Across our entire offering, we’re asking ourselves what will the impact of COVID be on retail, on our business,” Mr. Hannasch told The Globe and Mail. “We’re in a recession. It’s likely not to be something longer than that. And we just need to prepare for the inevitable shifts in consumers’ behaviour and what they need from us.”

Couche-Tard’s 75 licensed stores in China, and others in neighbouring Asian countries, might provide a clue for what’s in store for North America. The shopping experience there “has started to feel more normal” of late and some consumer behaviours have gone back to what they were, Mr. Hannasch said.

There are two exceptions: Online ordering has exploded and so has home delivery. Mr. Hannasch believes those will be permanent shifts. A McKinsey & Company study published this month on how Chinese shopping habits have changed with the pandemic found that the trend of buying over the internet has moderated in recent weeks but visits are still running at 15 per cent above pre-crisis levels.

“My 78-year-old mother learned how to order stuff on Amazon during COVID,” the Couche-Tard CEO said. “She’s not going to unlearn that. So I expect some of those things to stay. But in terms of how this plays out, I really think it depends on whether we see a resurgence in infections or not.”

Couche-Tard is now pulling forward some technological developments it says could become key to serving customers beyond the current pandemic. It is expanding home delivery in Canada and the United States, offering clients the ability to order and pay on their cellphones for store pickup, and trying fuel fill-up payment using vehicle licence-plate recognition in Norway.

The company’s mantra has always been that its roughly 15,000 convenience stores sell time, which is why it has among the industry’s fastest cash registers and why it trains employees never to be far from the checkout. Many of its efforts to boost speed, like touchless payment, make even more sense now in a public-health emergency, Mr. Hannasch said.

“We’re speculating a bit but we think there’s a strategic advantage in having fewer touchpoints and then certainly being faster,” the CEO said, adding that the company is testing numerous other tech advances, such as stores that use tracking technology to allow shoppers to buy and go without traditional checkouts, similar to stores under development by Amazon.

“I think COVID has just heightened the opportunities along that space to get it right," the CEO said.

Mr. Hannasch has been working from his hometown of Columbus, Ind., through the crisis, and says he has not crossed the border into Canada for the past two months. In pitching Couche-Tard as an investment opportunity over the years, the CEO told investors and analysts that it’s hard to envision an event that could have a major impact on the company’s global footprint, which stretches across 23 countries.

“Here it is,” Mr. Hannasch said. “We’ve lived through numerous hurricanes, power outages, tornadoes that [resulted in] significant loss of life and property. But I’ve never seen this broad an impact on so many people across a socioeconomic and demographic radius. Just massive. It’s going to ripple for a while, I think.” 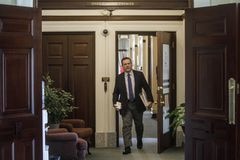 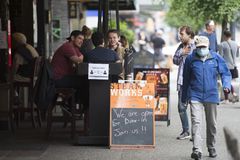 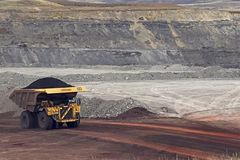