Quebec convenience store operator Alimentation Couche-Tard Inc. (ATD-B-T) and French grocery giant Carrefour SA (CRRFY) will work together to explore “opportunities for operational partnerships,” after Couche-Tard abandoned its US$20-billion takeover bid for Carrefour in the face of opposition from the French government.

In a joint news release Saturday, the two companies confirmed they had dropped the proposed friendly takeover deal, after lobbying efforts had failed to shake the government’s pledge to block the deal on the grounds of protecting national food security.

Instead, the companies said, they will “extend their discussions” to examine co-operating in areas such as “sharing best practices on fuel, pooling purchasing volumes, partnering on private labels, improving the customer journey through innovation, and evaluating ways of optimizing product distribution in the overlapping networks.”

“The opportunity for operational partnerships with Carrefour will further our journey toward becoming a leading global retailer,” Couche-Tard president and chief executive officer Brian Hannasch said in the news release.

Couche-Tard formally announced its “non-binding offer letter” for Carrefour on Jan. 13, priced at €20 (about $31) per share. The proposed takeover was immediately met with opposition from France’s government, which faced the prospect of the country’s largest retailer coming under foreign control.

“Food security is strategic for our country, so that’s why we don’t sell a big French retailer. My answer is extremely clear: We are not in favour of the deal. The no is polite, but it’s a clear and final no,” Mr. Le Maire said in an interview Friday on French news channel BFM TV.

Food security has been a concern in many European countries during the COVID-19 pandemic, as border and travel restrictions have disrupted supply chains. But the prospect of a foreign takeover of Carrefour also carries political sensitivities in France, where the company is something of a national institution.

Carrefour owns about 12,300 stores globally, with its biggest operations in France – where it has about 105,000 workers, making it the biggest private-sector employer in the country.

Couche-Tard is no lightweight itself, ranking as one of Quebec’s biggest international success stories. The company, best known for its Circle K chain, operates more than 14,000 convenience stores and gas stations globally, including 2,700 in Europe. The ambitious Carrefour takeover would have expanded the company into the supermarket business and launched it into the big leagues of European retailers.

Louis Hébert, a professor at the HEC Montréal business school who specializes in mergers and acquisitions, said a strategic alliance could be a way for the two companies to deepen their ties with an eye to pursue a merger or acquisition again down the road, when the political climate may be more favourable.

“This idea is not a bad idea at all. It keeps the door open,” he said. “Before getting married, you start to date.”

Couche-Tard plans to hold a conference call with financial analysts on Monday morning to discuss the potential for partnering with Carrefour, as well as “the company’s strategic goals.” The call is to be webcast on Couche-Tard’s corporate website.

In a pair of tweets Sunday morning, Canadian Minister of Innovation, Science and Industry François-Philippe Champagne said he had talked with Mr. Bouchard following Saturday’s announcement. He said he assured Mr. Bouchard that the Trudeau government “will always be there to support Canadian businesses, here and abroad.”

“Two-way trade benefits businesses on both sides of the Atlantic, and consumers will benefit from the knowledge, networks and ideas that result from these exchanges,” Mr. Champagne said.

The abandoned Carrefour deal marks Couche-Tard’s second halted attempt at a major acquisition since the COVID-19 crisis began. It also stopped a bid for Australia’s Ampol Ltd. last April, saying the pandemic had clouded the prospects of the petroleum and convenience store company. 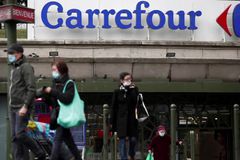