Lisa and Rich Flynn left Indiana four years ago to retire in rural Colorado. They bought a home with a four-pane picture window in the living room, where they set up chairs to look out on the majestic Front Range of the Rocky Mountains.

But when the couple shift to their south-facing kitchen window, they see what’s shattered their Colorado idyll. It’s a towering rig, set up more than a kilometre away to “frack” natural gas from under nearby farmland. On the windowsill, Mr. Flynn, 65, is growing a Sansevieria plant – which is believed to absorb benzene – to block the view.

Ms. Flynn, 60, a retired respiratory therapist, says her asthma has grown worse since the fracking started, prompting her to file a complaint with state regulators. “We have reconsidered living here, but we love it,” Ms. Flynn says after using her inhaler. “I did not come here with the thought of being an environmental activist.”

The owner of that rig, and hundreds more fracking for gas and oil in Colorado communities, is the Canada Pension Plan Investment Board, the money manager in charge of this country’s national pension plan.

In 2015, CPPIB formed a Denver-based company called Crestone Peak Resources and spent about US$600-million to buy 51,000 acres of producing oil and gas wells and drill sites in Colorado from Calgary-based Encana Corp. Earlier this year, Crestone spent another US$400-million, with a commitment of up to US$310-million of that from CPPIB, to buy 100,000 acres of land with drilling sites from ConocoPhillips.

If there’s one holding in CPPIB’s $434-billion portfolio that brings the debate over investors and climate change into sharp relief, this is it.

CPPIB emphasizes its renewable-energy investments – $6.6-billion at the end of March, 2020, twice as much as the year prior. It calls the threat of climate change “one of the world’s most significant physical, social, technological and economic challenges.” Yet CPPIB, with $11.6-billion invested in conventional energy, still sees opportunities for big returns in oil and gas – including fracking, one of the most controversial parts of the energy industry.

“We don’t see any contradiction whatsoever,” said Michel Leduc, CPPIB senior managing director and top spokesman. The global transition away from carbon will be gradual, he said, with the International Energy Agency estimating that even with a “relentless focus” to reduce emissions, fossil fuels would fulfill 58 per cent of world energy demand in 2040 – down from 81 per cent in 2018. “To be abundantly clear, there are attractive opportunities in the oil and gas sector that remain today, and, we believe, into the future,” Mr. Leduc says.

In hydraulic fracturing, known colloquially as fracking, energy producers drill down, then horizontally, often for more than 1.5 kilometres. Fracking fluid – water with additives such as chemicals and sand – breaks rocks apart and frees up deposits of oil and gas, making them easier to extract. The process also can release toxic chemicals, such as benzene. The operations require heavy equipment, trucked in and out.

Increasingly, fracking sites have neighbours. Denver and the nearby mountain community Boulder have sprawled out into rural Colorado, up against formerly remote acreage long owned for its energy-extracting potential.

In September, 2017, a Crestone crew was trying to cap wells at a site separated by a narrow driveway from the playground of the 400-student Aspen Ridge Preparatory School in the town of Erie. The site and school are so close, students launch soccer balls and basketballs over a fence onto the now-inactive site. 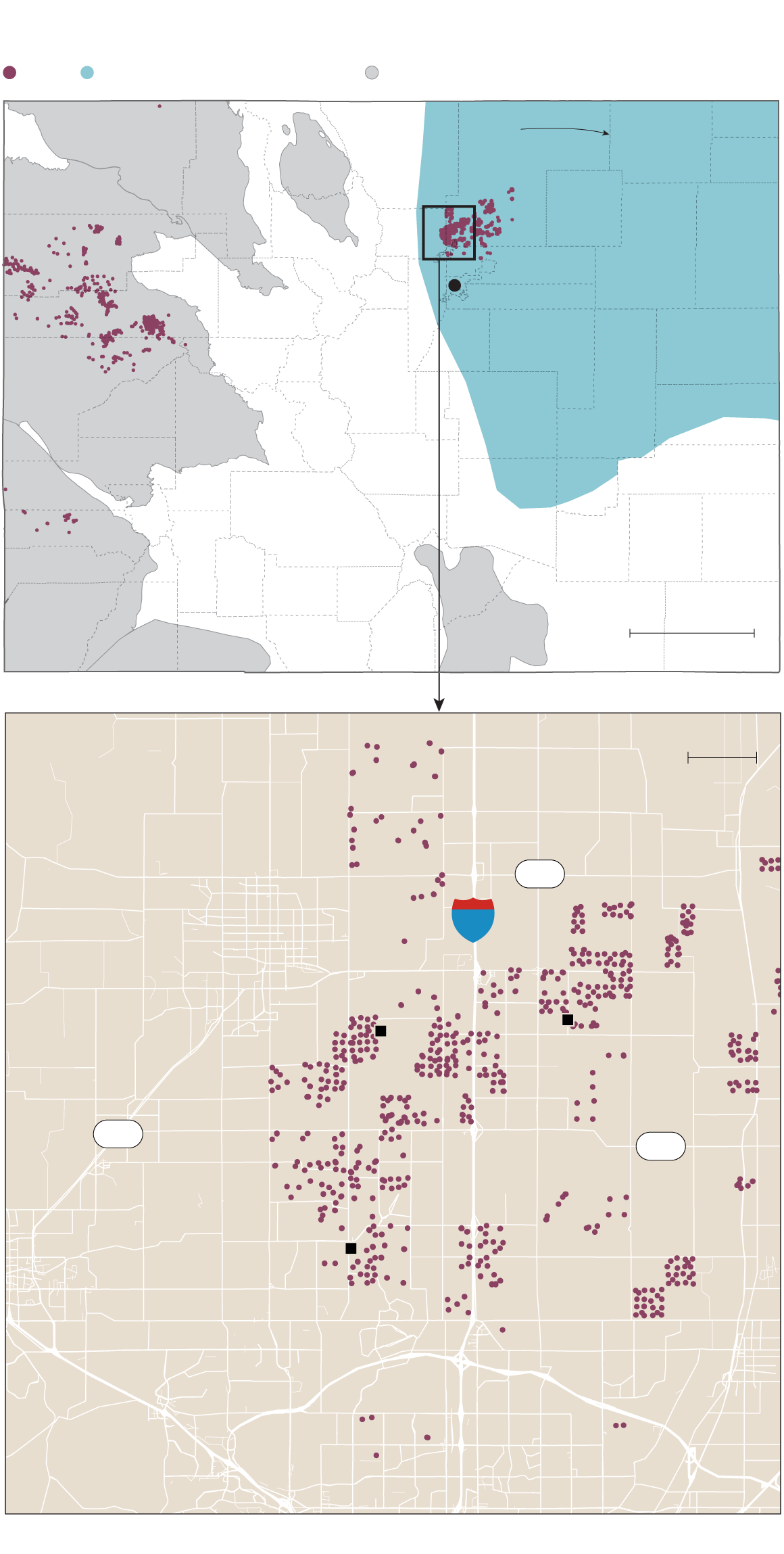 Colorado Oil and Gas Conservation Commission staff saw Crestone vent the wells from open-top tanks about 25 metres from the playground, with no shield in place. According to the COGCC, volatile organic compounds were "visibly drifting toward the children in the playground.” Staff ordered a shutdown of the operation until Crestone brought in a new system.

In August, 2018, the COGCC fined Crestone US$10,000 for this “moderate” violation. John Jacus, an attorney representing Crestone, told the commissioners the venting “was done to existing requirements at the time” and said the incident was “something that we have all learned from.” But he also called the fine “arguably, a bit excessive.”

The Aspen Ridge incident was one of 20 notices of alleged violations that Crestone has received owing to COGCC staff inspections and oversight. One resulted in a fine of US$139,450, for failing to record testing results for several wells.

The COGCC has received more than 1,100 citizen complaints about Crestone since September, 2015, citing noise, smells, air quality or other matters. That’s more than one-third of the complaints the COGCC received over that time.

Jason Oates, a Crestone lobbyist and spokesman, says that none of the citizen complaints have resulted in a notice of violation from state inspectors. He attributed the majority to “one specific community that has very organized anti-oil and gas groups associated with it.” He’s referring to people in and around the town of Erie, a community of about 25,000 residents, 45 kilometres north of Denver.

Bryon Bednar lives next door to a proposed Crestone project. He’s a civil engineer and retired colonel in the U.S. Air Force Reserve who called a radio station to complain about an advertisement that described Crestone as “a Colorado company,” not a Canadian one, after he heard it on Rush Limbaugh’s show.

“This is not just Erie activists causing oil and gas headaches,” he says. “It’s a statewide issue of people saying enough is enough.”

On the night of Dec. 9 last year, an orange glow arose from a Crestone rig about five kilometres north of Erie. The rig – the one seen from the Flynns' kitchen window – was in flames.

The incident report from the Mountain View Fire Protection District describes a chaotic scene that required 22 responders. Chad Rademacher, who assumed command on arrival, said in the report that none of the Crestone workers he first encountered were able to identify a supervisor. Later, after a Crestone supervisor on site said there were “no other injuries,” three more injured workers appeared.

During this time, Crestone’s site supervisor Mr. Rademacher wrote, “was concerned the drilling tower had been compromised from the fire and had a high potential of collapsing.”

Ultimately, seven workers, all contractors, went to local hospitals. Some were treated and released. Others were admitted, but discharged within one week, Crestone says. One was admitted to a burn centre for specialized treatment.

State regulators, as well as the federal Occupational Safety and Health Administration, investigated the matter and have concluded their reviews. Crestone says OSHA determined that it did not violate any federal safety regulations. Colorado is requiring Crestone to document procedures and the training it’s implementing to prevent a repeat.

In 2018 elections, Colorado voters rejected a constitutional measure that would have put new restrictions on drilling. Yet at the same time, an anti-fracking Democrat, Jared Polis, won the governorship, and Democrats took control of the state’s Senate.

State records show the company made US$607,250 in political donations to several Colorado political action committees in 2018 that supported Republican or “pro-business” candidates.

Nearly half, US$300,000, went to the pro-Republican Senate Majority Fund, while US$200,000 went to Better Colorado Now, in support of Republican gubernatorial candidate Walker Stapleton, a member of the Bush political dynasty. Crestone gave US$100,000 to Protect Colorado, which said it opposed "any ban or restriction on hydraulic fracturing.”

So far in 2020, the company has made a total of just $5,000 in political donations, split evenly between political action committees that support state Republicans and the Democrats who now control the governor’s office and legislature.

Crestone spokesman Mr. Oates says in 2018, “it was in Crestone’s interest to keep," rather than tighten, Colorado’s existing regulations, which it considered the strictest regulations in the country. "We needed to fully allow those to work out.”

CPPIB’s code of conduct says the fund must avoid favouring any political group or political position. However, the code is focused on CPPIB itself and its employees, not companies owned by the fund.

Mr. Leduc of the CPPIB said the companies the pension plan invests in are free to engage in the political process in accordance with local laws, and its code of conduct “appropriately reflects the clear lines between operator and institutional investor. ... We do not engage in political donations.”

Cynthia Williams, a professor at York University’s Osgoode Hall Law School in Toronto, says in a recent research paper, however, that there are “ethical questions” about a CPPIB portfolio company using money "to try to shape politics to support its oil and gas investments in Colorado, even as the government of Canada has committed to working to transition to a low-carbon economy.”

A number of CPPIB’s global peers are adopting divestment policies, such as setting percentage targets to reduce exposure or selling out completely from types of energy or specific companies. The international environment group 350.org has identified 1,158 investors with some form of fossil fuel divestment policy.

“While other investors are abandoning the energy industry altogether or establishing unmovable targets to sell down, we swim against the current because the industry is an integral part of the evolution taking place now,” Mr. Leduc says. “History will no doubt fairly judge investor strategies that helped the transition – perhaps less generous on those walking away at delicate junctures.”

Meanwhile, Crestone is prepared to keep drilling, although low energy prices this year have slowed the company’s efforts. “We’re obviously in the twilight, or in the waning part, of what was originally acquired,” Mr. Oates says. “We saw the original Crestone acquisition of Encana’s acreage as a starting point with the desire to grow.”

The ConocoPhillips land, he says, is “very much in its infancy.”

The Globe and Mail's Sherrill Sutherland explains what is shale oil, how it is drilled and why it's important to the energy industry