Saputo Inc. is making a return to Europe with a $1.67-billion deal in Britain that comes just weeks before the country is set to leave the European Union.

Saputo announced on Friday that it has made an all-cash bid for London-based Dairy Crest at 620 pence a share, or £975-million in total. Dairy Crest is one of the largest cheese makers in Britain with brands such as Cathedral City, which is among the most popular in the country. The company has around 1,100 employees and posted revenue of £457-million in the 12 months ended March 31, 2018.

Mark Allen, Dairy Crest’s chief executive officer, said that although the company’s sales were almost exclusively in the United Kingdom, there are plans to expand internationally including into Europe. “We’d like to think that we can use the Saputo engine to develop some of our overseas sales in the years to come,” he said.

However, those plans could become complicated by the the pending U.K. departure from the EU on March 29. British Prime Minister Theresa May has been unable to secure a Brexit deal with the EU and there’s growing fear the country will crash out of the bloc without any agreement on a host of issues, including trade, banking and border controls. Business leaders have said a no-deal Brexit could cause chaos at the border and lead to punishing tariffs from the EU. And many business groups have called for a delay to Brexit.

Mr. Allen said Dairy Crest can afford to wait until the dust from Brexit clears. The company currently generates 98 per cent of its sales in the United Kingdom and all of its milk supplies come from British farmers. “We’ve got a stated objective to [expand sales internationally] and we will do that overtime,” he said. “But there’s no mad rush to do that. We will let things settle down from a Brexit point of view and then develop it in the coming months and years. And Saputo can, for us, be a real positive part of that.”

In a statement, Saputo’s chairman and CEO Lino Saputo, Jr., said Dairy Crest was an “attractive platform for Saputo and fits well within our growth strategy.” He added: “We believe that under Saputo ownership, Dairy Crest will be able to accelerate its long-term growth and business development potential.” Saputo is keeping all of Dairy Crest’s management and has no plans to close any plants or change the company’s arrangement with farmers. And there are no conditions related to a no-deal Brexit.

The British government is also keen to strike a trade agreement with Canada after Brexit, and cheese has already come up as a key issue. Provisions in the Canada-EU trade deal, which largely came into force two years ago, doubled EU cheese imports to Canada to 31,972 tonnes, or about 7.5 per cent of the Canadian cheese market. “Saputo has an ambition to take our [Dairy Crest] products into Canada and I’m sure they’ll be working on that behind the scenes” during Canada-U.K. trade talks, Mr. Allen said.

This will be Saputo’s second foray into Europe. The company acquired cheese plants in Germany and Wales in 2006 and 2007, respectively. However it closed both in 2013, after calling the European adventure a “challenging experience.” At the time the company blamed rising milk prices for pulling out.

Russ Mould, investment director at London-based AJ Bell, said Saputo’s offer will be a “pleasant surprise” for Dairy Crest shareholders. He noted on Friday that the company sold its milk business in 2015 to focus on cheese and spreads. “Unfortunately shareholders haven’t been richly rewarded over the past few years with the share price drifting sideways and then downwards,” he added. “The cash offer gives them a chance to get out of a fairly pedestrian business and at a price that hasn’t been seen since September, 2017.” 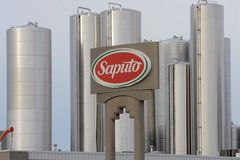