Dairy farmers are nervously eyeing the North American free-trade talks in Washington, fearful any move to bargain away protection of their markets will erode their incomes and way of life.

Ottawa’s negotiators are prepared to offer greater access to the Canadian dairy market in a bid to retain dispute-resolution measures in the three-way agreement, according to sources.

Farmers and their lobby groups are urging Ottawa to resist any demands to open up the market to cheaper foreign milk since it could hasten the end of the supply-managed dairy system and drive some farmers out of business.

For dairy producers accustomed to the steady rhythms – and prices – of the farm, the turmoil is unwelcome.

“We planned our business around selling so many litres of milk and if that gets cut back, obviously we’re not going to get paid more,” said Andrew Campbell, 32, who milks a herd of 65 jerseys and holsteins on the same farm worked by his parents and grandparents in Strathroy, Ont. “Generally the expenses don’t go down. That ends up hurting, certainly in the short term.”

Mr. Campbell said he knows there is more at stake than dairy jobs and milk sales in the agreement covering more than US$1-trillion in trilateral trade. But he said he expects Ottawa to win as much as it cedes in dairy market share.

“Is it simply a cut and ‘thanks for helping the team?’ Or does something else come with it? If more is allowed this way, why shouldn’t more milk be allowed the other way, too?”

About 10 per cent of Canada’s dairy market has been opened to tariff-free imports, through trade with the United States and in recently signed agreements with Europe and the TransPacific Partnership.

Canada’s 11,000 dairy farms are protected from competition and price swings by a system established in the 1970s. Farmers’ production and the prices they are paid for milk are determined by co-ordinating industry groups. High tariffs keep out foreign milk.

The dairy industry says the supply-managed regime ensures farmers are paid a fair price for the milk they produce. Critics of the system say it discourages innovation and favours farmers at the expense of consumers, who pay too much for milk, cheese and other dairy products.

U.S. President Donald Trump has declared Canada’s 270-per-cent tariffs on overquota imports of dairy products “not fair” and threatened to tax Canadian autos at 25 per cent if negotiators cannot come to an agreement to his liking.

Al Mussell, an independent analyst at Agri-Food Economic Systems in Guelph, Ont., said Mr. Trump’s concern about the relatively tiny Canadian dairy market stems from his desire to please his supporters in Wisconsin and other dairy-producing states suffering from a supply glut and low prices.

In fact, the dairy systems of Canada and the United States are “very similar, in most respects,” Mr. Mussell said. Both countries regulate prices of milk according to the processors’ uses, pay farmers a weighted average of prices, and protect their markets with high tariffs. The major difference is Canada limits the production of dairy products while the United States does not. This has led to oversupply and “dire” conditions in parts of the U.S. dairy industry, he said.

The cheaper supplies of U.S. milk could drive down prices for consumers and food processors.

But Dalhousie’s Mr. Charlebois said any price drop could last just a few years. He said there is no assurance grocers would pass on the savings, and it is tough to predict how new entrants in the market would behave.

On top of that, Ottawa might have to levy a new milk tax to cover a compensation package to buy out or compensate dairy farmers for a drop in the value of their operations. The dismantling of supply management in New Zealand and Australia led to an 18-per-cent milk tax that caused dairy prices to rise, Mr. Charlebois said. The European and TransPacific trade deals came with a compensation scheme worth $4-billion to help compensate farmers, who hold production rights or quota worth an average of almost $2-million.

Still, Canada’s dairy supply system needs a revamp, he said. Farmers have no incentive to innovate or become more competitive, and consumers and industry are stuck with limited choices. The system was set up in 1972 – when there were more than 41,000 dairy farms in Canada. Today there are just 11,000 farms “and that’s with supply management."

This lack of innovation leads the dairy industry to make products it thinks we want, rather what we actually want, and “that’s not how we do business any more,” said Mr. Charlebois, who favours a gradual reduction of tariffs, changes to the pricing scheme and a separate production stream for exports.

Ottawa dairy farmer Peter Ruiter sees it differently. He said Canada’s dairy system carefully matches production with demand, and prices are set to cover farmers’ costs of fuel, labour and other expenses, while ensuring they can make a fair living.

“If you give too much away to the market our system doesn’t work,” said Mr. Ruiter, 50. “I think Trump knew nothing about dairy until about six months ago. If he thinks by getting rid of all Canadian dairy farmers it’s going to fix their supply problem, it’s not. Their problem is they are oversupplying the market with a product that has an end date.”

Trade rhetoric and heated words from Washington have cast a shadow over the future of his family’s farm, which suffered a barn fire last year that killed 80 cows.

His milk output has been picked up by other farmers until he is able to replace his herd. He’s considering buying cows owned by a retiring farmer, and is getting by on insurance money while spending $1.7-million to build a new barn and buy new milking gear.

“That’s not chump change,” he said. “So far the bankers have stood behind me. I’m hoping they know something more than I do concerning Trump and the tariff agreement.” 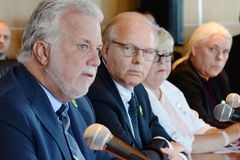