Desjardins Group is launching a $45-million fund to invest in financial technology startups as it seeks to build more direct relationships with a nascent sector that once looked poised to disrupt traditional banking.

The new fund will make investments ranging from a few hundred thousand dollars to as much as $3-million, taking stakes of 10 per cent to 25 per cent in early-stage “fintech” companies. It will be managed by Desjardins Capital, the financial co-operative’s venture capital arm, which has invested in more than 400 companies.

The fund builds on existing partnerships and investments Desjardins has made with more than 20 fintechs dating back several years. The burgeoning fintech sector was once seen as a threat to established institutions such as Desjardins but, faced with the high cost and difficulty of acquiring new customers, many fintechs have changed course and have begun collaborating with large financial companies to help them with the transition to digital banking and insurance services.

By creating this new fund, Desjardins is looking to take tighter control of its investments in financial technologies, and to sharpen its focus on products and services that can directly contribute to its strategy, from innovation in insurance and wealth management to strengthening cybersecurity.

Desjardins has already pumped $25-million into Luge Capital, a venture fund focused on fintech and artificial intelligence that launched last year with a total of $75-million from backers such as Caisse de dépôt et placement du Québec and Sun Life Financial. Desjardins will continue to back Luge, but now wants to make its own investment decisions as well. Whereas past investments have often been confined to startups in Quebec, the new fund will also seek out opportunities in the United States, Britain, Europe and Australia.

“With $45-million, we can do a lot," said Guy Cormier, chief executive of Desjardins Group. “There’s a lot of noise, there’s a lot of buzz in the fintech industry, and we just have to be quite careful and quite clever about the kind of partnerships [we choose]. We really know what we want to do, what we want to accomplish, so we’re not trying to go everywhere. But with this fund now we have more capacity.”

The fund’s first investment falls outside the normal boundaries of fintech. Desjardins is putting $400,000 into X-TELIA Group Inc., a company that operates a wireless network tailored to home automation and connecting the so-called internet of things, to help expand its network across Canada. Desjardins sees applications to home and auto insurance, but is also a major lender to the agricultural sector, and X-TELIA connects smart sensors on farmers’ grain silos to make it easier to manage inventory.

“We want to add to our offer. It’s not any more enough for a financial institution to do the financing or to do the everyday banking," said Martin Brunelle, vice-president of transformation and special projects at Desjardins. "What we want is to ease the lives of our members or our customers.”

Three other fintech companies are currently in the pipeline to receive investments from the new fund, Mr. Brunelle said. But they are at different stages of maturity and some could take years to bear fruit, if they flourish at all.

“The first goal is not return on investment for us. It’s really to build a relationship that is stronger, tighter with these fintechs, and will help us to build something that is great for our members and clients,” Mr. Cormier said. “The return on investment will be there maybe in a few years."

FBI reaching out to Quadriga users as it steps up investigation
Subscriber content
June 4, 2019

Wealthsimple raises $100-million in one of Canada’s largest investment rounds for a fintech company
Subscriber content
May 22, 2019 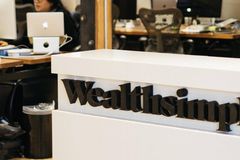