When Goldcorp Inc. executives sat down with their counterparts at Newmont Mining Corp. at an upscale restaurant in downtown Vancouver, it was supposed to be a casual get-together. The mid-December dinner had been on their schedules for some time, and was planned simply to build the rapport between the two senior gold mining companies.

Instead, in one of the restaurant’s private dining rooms, Newmont chair Noreen Doyle and chief executive Gary Goldberg told Goldcorp attendees it wanted to acquire the company. The reaction from Goldcorp chair Ian Telfer and CEO David Garofalo was shock.

While Vancouver’s Goldcorp had been exploring the idea of working with Denver-based Newmont for a few years, the idea of a takeover had never come up. However, with Goldcorp’s share price severely beaten down after many strategic blunders, it was vulnerable. In fact, Goldcorp had recently been talking with Australia’s Newcrest Mining Ltd. about a possible takeover of Goldcorp.

Over dinner, Newmont executives laid out the case for a US$10-billion acquisition of Goldcorp that would give the combined company 20 properties across four continents, the world’s highest gold production and many future development projects.

Code-named Altitude, the deal came together in only about a month. Some take years.

“All industries consolidate when they shrink. So I could see this coming for a while. We were looking at how is the best way to participate in this consolidation at a time when our stock price was under pressure," Mr. Telfer said in an interview.

He declined to comment on details of the Newmont negotiations and any talks with other mining companies. Spokespersons for Goldcorp, Newcrest and Newmont declined to comment for this story. The Vancouver meeting and other details about the deal with Newmont were described by sources with knowledge of the situation who are not authorized to speak publicly.

At the time of the meeting between Goldcorp and Newmont executives, the mining industry was still buzzing over Barrick Gold Corp.'s US$6-billion deal with Randgold Resources Ltd. The proposal, unveiled in September, contained no premium for Randgold shareholders, but was being positively received by investors in both companies. In a no-premium deal, the buyer offers the market price instead of a higher price.

Australian media reported in late November that Goldcorp was in merger talks with Newcrest. The Melbourne-based miner took a page out of the Barrick-Randgold playbook and proposed a no-premium takeover, which they code-named Orion, according to an industry source not authorized to speak publicly. But Goldcorp, whose shares were trading around a 17-year low, rejected it. The source said Newcrest is not expected to make another proposal for Goldcorp.

It was the second time in little more than a year that Newcrest had engaged in takeover talks with a large Canadian gold company. In the middle of 2018, Newcrest was in talks to be acquired by Barrick Gold Corp., according to several industry sources not authorized to speak publicly. No deal was reached. Barrick did not respond to a request for comment.

Mr. Telfer and Mr. Goldberg had met a few times previously and established a solid relationship. That made it easier for the companies to put the deal together. The two teams raced through the process of examining each other’s books and visiting mine sites and other operations. Newmont and Goldcorp had planned to make the blockbuster takeover announcement in the middle of this week. There was chatter in the industry about a deal between the two miners, and The Globe and Mail reported last Friday that they were in talks. Early Monday morning, the megadeal was announced.

The terms included a slim 17-per-cent premium, with the stock near historic lows. Mr. Telfer was named deputy chair of the new company, but no one else from Goldcorp was announced as part of the senior leadership team. Newmont executives will fill the roles of CEO, president and chair. Goldcorp’s headquarters in Vancouver will be downgraded to regional status. Two thirds of the directors will come from Newmont, and one third from Goldcorp. The head office will remain in Denver. On paper, it looked as if Goldcorp had capitulated.

When asked why sell now, Mr. Telfer said: “The one thing that you learn in the mining business is that transformative opportunities are very rare. When you are presented with one of them, you must act on them. Whether your circumstances are perfect or not.”

It is unclear how long Mr. Telfer will remain with the new Newmont. The U.S. company has a mandatory retirement age of 75, and the Goldcorp chairman turns 73 this year. Meanwhile, neither company would say whether Goldcorp’s CEO, Mr. Garofalo, will have any role in the new company. If he is on the way out, he stands to receive a severance package worth about $10-million.

The vanishing of Goldcorp, founded in 1994 by Canadian mining hall of fame inductee Robert McEwen, is a drastic reversal of fortune. Only three years ago, it was an industry darling and the biggest gold company in the world by market capitalization, a miner that appeared not to have made the same mistakes as its peers during the great commodities boom and bust cycle from the mid-2000s to late 2011. But hidden from view were brewing problems within Goldcorp, including acquisitions that failed to pay off and persistent operational issues at many of its biggest mines.

Still, Mr. Telfer says the deal is a good one for the company.

“You have to look at the longer game," he says.

"When people start to look at the metrics of Newmont-Goldcorp going forward, our gold equivalent reserves, they are double Barrick’s. I have been in this business a long time. Over the long term, it’s the long-life reserves that makes it a successful company.”

Mr. Telfer also said he felt Goldcorp was a risk of being left behind in a rapidly evolving industry.

“When an industry starts to consolidate, it happens quicker than people think. It is like musical chairs. You better find the best partner you can and get something done, because when partners are gone, they are gone.”

Opinion
Foreigners are taking control of Barrick and Goldcorp – but the miners made this mess
Subscriber content
January 17, 2019

Mystery solved: Why Newmont is offering a mere 2 cents in cash as part of its bid for Goldcorp
Subscriber content
January 17, 2019 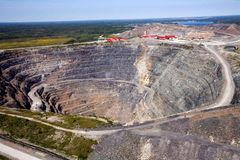