Ontario Premier Doug Ford says mining in the remote Ring of Fire region would add $9.4-billion to the province’s gross domestic product – just a day after saying his government had no reliable estimate of the mineral riches in the northern area.

Speaking in the legislature on Tuesday, Mr. Ford said development in the Ring of Fire would also create 5,500 jobs a year, $6.2-billion “for the mining industry” and $2-billion in government revenue.

His numbers appeared to be drawn from a 2014 Ontario Chamber of Commerce study that looked at the Ring of Fire’s potential economic impacts over 10 years and assumed that four massive projects to mine chromite – which is used to make stainless steel – would be built and operated at a profit.

But the viability of those chromite projects have never been proven by Noront Resources Ltd., the tiny junior miner that owns them. The Ring of Fire is situated in deep in the swamp-like muskeg 550 kilometres northeast of Thunder Bay – at a profit.

On Monday, Mr. Ford signed a deal with two remote First Nations near the Ring of Fire to study a potential road link that would connect their isolated communities but also potentially open up the area for mining. Other First Nations in the region have already vowed to fight the project, saying they were not consulted, or are calling consideration of an alternate route.

Asked Monday about the government estimates for the value of the Ring of Fire, Mr. Ford said he wouldn’t “put a specific dollar figure” on it, and that the road was primarily about improving the lives of the First Nations.

In an e-mail, Ford spokeswoman Ivana Yelich said Tuesday that "[a]ll business cases point to the unprecedented opportunity that exists in the region” and that a road is needed to realize the area’s potential.

Both Mr. Ford’s Progressive Conservatives and the previous Liberal government at Queen’s Park have trumpeted the Ring of Fire’s massive chromite deposit as a boon for years. But interest in the mining world has long since waned. Experts say world markets are already awash in chromite mined elsewhere.

“It’s a pipe dream. It’s not going to happen. It’s just going to get talked about," said Mohan Srivastava, a long-time mining consultant and vice-president of TriStar Gold. He added that the Ring of Fire was generating little interest at the industry’s massive Prospectors & Developers Association of Canada (PDAC) conference in Toronto this week.

The U.S. company that proposed most of the chromite projects cited in the 2014 report, then known as Cliffs Resources, sold them off to tiny Toronto-based Noront in 2015 for just $20-million, a fraction of the $550-million Cliffs had invested in them.

Noront’s president and CEO, Alan Coutts, says his company is studying its own plans for smaller chromite mines that those Cliffs had proposed. He insists the potential to exploit the chromite resource is strong, but any mine could be seven to 10 years away.

The company plans to first open a nickel-copper-palladium mine, a site known as Eagle’s Nest, for which it has a positive 2012 feasibility study, which would have to be redone. Mr. Coutts said the $1.6-billion road – which he expects Ottawa and Ontario to co-fund – will still take at least five years to build. Only then could the nickel mine begin construction, he said.

“We’ve got a great resource at the end of the rainbow,” Mr. Coutts said. 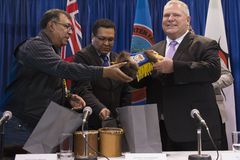 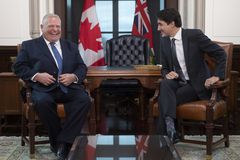