A fleet of electric scooters will be ready for Calgarians to use by Stampede weekend, says a company that’s the first to roll out an e-scooter sharing program in two major Canadian cities.

Bird Canada Inc. will unveil the two-wheeled contraptions in Calgary and Edmonton in July, and has plans to expand to Kelowna, B.C., soon after. The scooters look like beefier versions of the popular foot-propelled children’s toy.

The scooters cost $1.15 to unlock, and another 35 cents a minute of riding time. When users are finished, they can leave the dockless scooters wherever they choose to be taken over by the next customer.

E-scooter sharing services have been controversial since they rolled out in U.S. cities. Their opponents are concerned they discourage walking, clutter cities when users dump them carelessly, endanger pedestrians and are risky to ride.

Paris, a city where scooter-share companies have expanded aggressively, saw its first e-scooter-related death on June 10 when a man was hit by a truck while riding.

A public-health study on e-scooter injuries in Austin, Tex., found that a third of riders injured between September and November of 2018 were hurt during their first ride. Two-thirds of injuries occurred during a rider’s first nine rides.

When it comes to safety, Mr. Lyons pointed to company data from Austin that suggested e-scooters were safer than bicycles. His numbers showed there were 37 injuries related to e-scooters in a five-month period, and 81 bike-related injuries in the same period.

To battle clutter, he said Bird Canada will hire teams of people to clean up the scooters during the day and again at night.

In Calgary, where Bird scooters will roll out first, city staff are still working with the Alberta government to develop a permit system for scooter operators, shared mobility program manager Nathan Carswell said.

He wouldn’t comment on whether Bird’s plans to roll out for Stampede weekend were feasible, saying only that Calgary needs to wait for the province to shift its Traffic Safety Act requirements to permit e-scooters.

In Edmonton, city staff are working to get an exemption to the provincial traffic rules in order to allow e-scooters. City council is expected to amend the bylaws necessary at their July 16 meeting, city spokeswoman Amanda Gelinas said.

“E-scooters in the province of Alberta are a prohibited vehicle. So we have to properly define what the vehicle could look like,” she said.

What happens when it snows? The city says its permit will be valid year-round, but it’s up to scooter companies whether they’ll continue to operate.

At least one Alberta cyclist is welcoming the addition of e-scooters to Calgary bike lanes. Gary Millard, president Bike Calgary, says that adding more active-transportation options could improve awareness of bicycle and scooter riders who travel slower than cars.

“Our view is that if you’ve got well-designed infrastructure … quite frankly we don’t care about the shape of the vehicle,” he said. “It’s more how you integrate with the flow of traffic.”

Kelowna, a city of 130,000 on the shore of Okanagan Lake, began piloting e-scooter sharing this past spring. Matt Worona, Kelowna’s active-transportation co-ordinator, says they’re “quite an interesting option” for getting people out of their cars, because they’re easy and intuitive to use.

“They’re a lot of fun,” he said. “I think it opens the door to different types to people who wouldn’t identify themselves as cyclists.”

But studies on the number of injuries related to their use concerned him.

Bird’s entry into the Canadian market comes with the help of Toronto Raptors co-founder John Bitove, who committed capital to the project.

Bird Canada purchased the rights to use the name and technology of the original California-based Bird, which operates scooter sharing in more than 100 cities in the United States and Europe. Mr. Bitove and Mr. Lyons have worked together before, when they brought SiriusXM satellite radio to Canada using a similar licence-purchasing method.

Mr. Lyons said he chose Alberta as a starting point for the scooter share because it was “furthest along from a regulatory perspective.”

“We’d love to be in places like Toronto, Vancouver and Montreal later on. But they’re a bit behind.”

Are driverless shuttles coming to your neighbourhood?
April 4, 2019 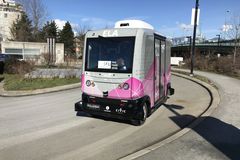 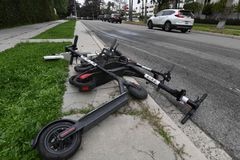