Canada received a dose of new jobs last month, maintained sturdy wage growth and saw more people searching for work – all seen as positives by experts who believe the path is clear for the central bank to raise interest rates next week.

The economy added 31,800 positions in June and the unemployment rate rose to 6 per cent, from 5.8 per cent in May, Statistics Canada reported Friday in its latest labour force survey.

Many analysts read the higher jobless rate as an encouraging sign because the influx of nearly 76,000 job seekers back into the labour market last month suggested more people are optimistic they can find work thanks to the hotter economy.

The latest jobs report, which also contained weaker data points, arrived less than a week before the Bank of Canada’s upcoming interest-rate decision next Wednesday.

Ahead of the release Friday, expectations had already strengthened that governor Stephen Poloz will raise the benchmark at the meeting for the first time since January. The bank’s overnight rate target is 1.25 per cent.

For many, the jobs numbers helped reinforce their predictions.

“This report was more than enough to seal the deal on a July rate hike from the Bank of Canada,” said Frances Donald, a senior economist with Manulife Asset Management.

Average hourly wage growth, which is closely watched by the Bank of Canada ahead of its rate decisions, remained firm last month at 3.6 per cent. The number, however, did come down from its nine-year high in May of 3.9 per cent.

The predictions that Mr. Poloz will hike the interest rate, a move that will likely prompt Canada’s big banks to raise their prime rates, come even though the economy is facing significant uncertainty.

Ms. Donald believes Mr. Poloz won’t be knocked off his economic outlook by trade uncertainties because he has communicated that they largely remain hypotheticals at this point.

The jobs report Friday showed that, compared with a year earlier, overall employment was up 1.2 per cent last month following the creation of 214,900 jobs. The increase was driven by 284,100 new full-time positions.

But a closer look at the June numbers revealed some weaker results.

Canada added 9,100 full-time jobs in June and 22,700 part-time positions, while work in the less-desirable category of self-employment rose by 22,000.

Matthieu Arseneau, deputy chief economist for the National Bank, said that since the start of 2018 total employment has registered a decline of 48,000 private-sector jobs.

“After an impressive performance in 2017, the Canadian labour market definitely took a breather in the first half of 2018,” Mr. Arseneau wrote in a research note to clients.

“It remains to be seen if a rebound in the private sector will occur given growing trade uncertainties.”

By sector, the numbers showed goods-producing industries added 46,600 positions in June thanks to job-creation boosts in construction, natural resources and manufacturing.

Services sectors, meanwhile, lost 14,700 jobs mostly because of big decreases in accommodation and food services positions as well as wholesale and trade.

Ontario added 34,900 jobs for an increase of 0.5 per cent compared with the previous month, while Saskatchewan posted its largest monthly gain in over six years with the creation of 8,300 positions, which represented 1.5 per cent growth.

Youth unemployment increased to 11.7 per cent last month, up from 11.1 in May.

Mr. DePratto stressed he didn’t see anything in the jobs report to deter Mr. Poloz from hiking the rate next week.

The May numbers show that imports expanded 1.7 per cent, while exports dipped 0.1 per cent.

Higher imports in May of aircraft, other transportation equipment and energy products fuelled most of the increase. The figure for aircraft imports more than tripled to $937-million due to the purchase of several air liners from the U.S.

Exports declined mostly because of weaker trade on motor vehicles and parts as well as metal ores and non-metallic minerals.

The report showed that Canada’s trade surplus with the U.S. narrowed to $3.3-billion in May, from $3.7 billion April, as more imports headed north across the border and southbound exports decreased. 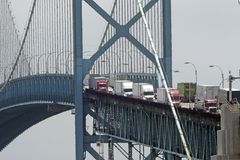 Canada’s economic outlook would be rosy, if it wasn’t for that U.S. trade war
Subscriber content
June 29, 2018 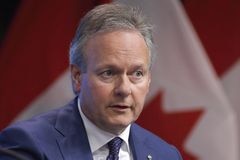 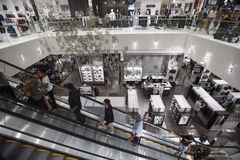