Gasoline prices to shoot up? No problem for vehicles that run on kilowatts.

The drone attacks, he rightly argued, made Saudi refineries and pipelines “look like 20th century vulnerability in a 21st century threat landscape.”

In fairness, electricity infrastructure is also vulnerable to drone-like attacks, but I can’t think of a single target that would knock out anywhere near 5 per cent of the world’s power supply. The trend in the electricity market is a move toward smarter, more robust grids and smaller, more distributed forms of generation based on renewable energy and storage. Even nuclear power, crucial in the fight against climate change, is expected to become more modular and decentralized.

Electricity is also not traded on a global market. In the unlikely event that 5 per cent of supply could be disrupted, the economic impact would be felt locally. There would be no global price spikes or risk to international stability.

It helps that the vehicles destined to consume this electricity are getting better and less expensive. Tired claims that electric vehicles (EVs) take too long to charge, don’t have enough range, or aren’t powerful enough are based on lingering perceptions that don’t reflect the pace of innovation.

Take EV charging. Earlier this summer, the head of technology at European oil giant BP told Bloomberg News that EVs capable of being fully charged in five minutes are only two years away.

Ottawa-based GBatteries, for example, is almost there. It uses machine-learning algorithms to dramatically speed up the charging process using a method called “pulse” charging. Its near-term goal is to make charging an EV just as fast and easy as filling up a car’s gas tank.

Vehicle range is getting much longer, too. The Nissan Leaf had a range of about 120 kilometres when it was introduced commercially about a decade ago. Buy one now and you’ll get 350 km out of a single charge, a bare minimum for many EV models hitting the market today.

Plunging battery-pack costs are part of the reason. Prices have dropped 85 per cent since 2010, and are expected to fall another 50 per cent between now and 2024. This means newer vehicle models are being equipped with bigger battery packs that can carry people longer distances.

But it’s not all about the battery. Toronto-based Inmotive, for example, has developed a novel transmission technology that extends the range of EVs a further 15 per cent. Within 10 years, it looks quite likely that the average range of EVs will reach about 600 kilometres, matching the average distance gas-fuelled vehicles can go on a full tank.

Equally important to note is the emergence of new EV architectures that give vehicles such as pickup trucks, SUVs and delivery vans the ability to tow and carry heavy loads that would have been unheard of only five years ago.

Last week, Amazon announced it is purchasing 100,000 electric-delivery vans from Plymouth, Mich.-based Rivian, an industry newcomer that has raised US$2-billion in capital this year alone. The order is the largest of its kind and sends a market signal that oil producers and traditional automakers will find difficult to ignore.

Closer to home, Toronto-based Havelaar Canada has developed an EV architecture that will make vehicles lighter, less expensive to manufacture, more powerful and up to six times faster to charge. They will also be capable of charging directly from a solar panel or small wind turbine, or even from another electric car: a handy feature to have in the event a drone knocks out your local power plant.

The reality is, electric vehicles within the next decade will match or exceed the performance of gasoline-fuelled vehicles on almost every metric. By 2040, Bloomberg predicts that six out of every 10 vehicles sold globally will be electric. That’s 56 million vehicles sold each year that won’t consume a drop of gasoline.

Global energy research firm DNV GL issued a report last week laying out how this will all impact Big Oil. It predicts oil demand will peak in three years, stay flat until 2030, then start an inevitable and sharp decline as sales of EVs overtake gas guzzlers.

In other words, the drone strike in Saudi Arabia merely exposed what we already knew was there – the vulnerable underbelly of a dinosaur industry that, in the age of electric transportation, is looking increasingly like a sitting duck. 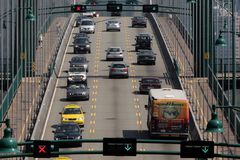 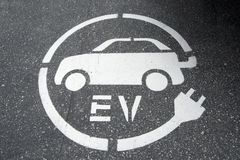 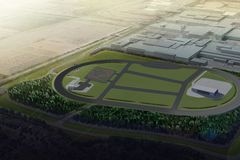