Plans to relocate the company, whose roots go back to the building of the Canadian Pacific Railway in the 1880s, were announced in October. Chief executive officer Doug Suttles said at the time that it would allow the company to access a larger source of investment from U.S. index funds, which hold shares based on companies’ positions in various stock indexes.

Tuesday’s vote saw 90 per cent of Encana shareholders support a resolution to redomicile the company in Delaware and rebrand it as Ovintiv Inc. They also backed a share consolidation that will see them retain one share of common stock of Ovintiv for every five common shares of Encana.

Mr. Suttles said in a statement that the vote demonstrated wide support for the company’s efforts to expose it to the deeper pools of capital in the U.S.

Peter Letko, senior vice-president of Letko, Brosseau & Associates Inc., one of Encana’s largest shareholders, said in November that his investment management firm planned to vote against the move. He slammed it as “a lousy plan,” asserting it was unfair and breached the oil company’s responsibility to realize full value for Canadian investors.

The plan must now get final approval from Alberta’s Court of Queen’s Bench.

Encana spokesperson Cindy Hassler said the company will meet with court officials this week to go over the vote and the company’s plans. She said they expect a final answer by Friday.

If it gets the go-ahead, Encana will get down to the nitty-gritty of closing, including tax preparations, the share consolidation and exchange, and establishing Ovintiv’s legal home in Delaware. Its headquarters will be in Denver.

When news of the U.S. move became public, Encana insisted it had no plans to lay off any of its 1,050 Canadian employees or move any of its offices in Alberta, British Columbia or Nova Scotia.

Ms. Hassler reiterated that on Tuesday, though the company has already moved to wrap up operations in Nova Scotia after permanently ceasing production at its offshore Deep Panuke natural gas field in May, 2018.

Encana is in the process of decommissioning the operation and its related subsea facilities, wells and pipeline. In September, it flushed and cleaned four production lines and one disposal line connecting gas wells to the platform.

This year, it will begin a five-month process of decommissioning its Deep Panuke Noble Regina Allen mobile offshore drilling unit. It expects to disassemble the platform this summer.

According to the company’s 2018 annual report, its other Canadian assets include a natural-gas operation in northeast British Columbia at Horn River; around 264,000 acres of land in the liquids-rich shale-gas region of the Duvernay Formation in west central Alberta; and a swath of wells in the Montney Formation, which straddles northeast British Columbia and northwest Alberta.

Encana’s move comes after the departure of several foreign oil and gas companies. Royal Dutch Shell, ConocoPhillips and Devon Energy Corp. recently sold their Canadian assets or have scaled back investments as a crunch in pipeline capacity crimps prices.

Canada’s Encana files paperwork for shifting base to U.S.
December 11, 2019 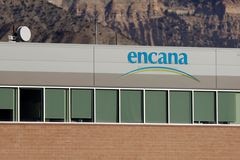 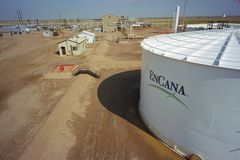 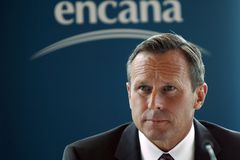