The European Commission concluded on Wednesday that Italy is in breach of EU fiscal rules because of its increasing debt, a situation that justifies the launch of a disciplinary procedure.

The move paves the way for the actual opening of the proceedings next month, but Brussels insisted that the process could be blocked if Rome made sufficient fiscal commitments.

Italy averted the same procedure in December after a last-minute deal with the Commission in which Rome committed to a lower deficit this year – but Italian government officials now seem less keen on compromizing after EU Parliament elections in May gave co-ruling far-right League party a resounding win.

“To be clear, today we are not opening a procedure,” the EU commissioner for the euro Valdis Dombrovskis told a news conference, noting that other steps would need to be taken before the formal beginning of the process.

Italy is possibly the next Greek crisis times 10

European Union states would have to back the Commission’s assessment that a procedure is warranted in the next two weeks. After that, Brussels could recommend to start the procedure, a step that could come before a meeting of EU finance ministers in early July.

“My door is open” to change the analysis if Italy makes new commitments, the EU economics commissioner Pierre Moscovici said.

If started, the procedure could lead to unprecedented financial sanctions. Although fines remain unlikely, the fiscal fight with Brussels exposes Rome to increased market pressure.

Italian sovereign bond prices and bank stocks fell after the Commission issued its opinion on Wednesday.

Italian banks were down nearly 1.8 per cent to a day low by 1039 GMT following the news, while the yield on 10-year government bonds rose five basis points to hit the day’s high at 2.575 per cent.

The International Monetary Fund identified Italy’s debt as a major risk to the euro zone economy, along with global trade strains and a hard Brexit, an EU document showed, anticipating a report the IMF will present next week.

The EU Commission is in charge of monitoring EU countries’ budgets and is obliged to publish reports on states which appear to deviate from agreed fiscal targets.

The Commission said the debt is increasing because interest rates that Italy has to pay to service it are increasing more than the country’s growth rate.

Brussels estimates that Italy paid last year €65-billion euros ($97.9-billion) in interest on its debt, “as much as for the entire education system,” Mr. Dombrovskis said.

The Commission’s forecasts are more pessimistic than Italy’s estimates. Rome expects the debt to rise this year to 132.6 per cent of output, and decline to 131.3 per cent in 2020.

The difference is mostly due to the fact that the Commission is not including in its forecasts a hike in sales tax next year, which Italian government’s officials have repeatedly said they will try to avoid despite revenues from the tax hike are already included in Rome’s economic forecasts.

The Commission also estimates that a planned privatization plan will have no impact on Italy’s growth, in contrast with Rome’s more optimistic estimates.

The Commission report also said Italy had made limited progress in addressing EU economic recommendations and backtracked on necessary structural reforms, such as a pension reform that Italy’s euroskeptic government softened, extending chances for early retirement. This “may negatively affect Italy’s growth potential,” the Commission said. 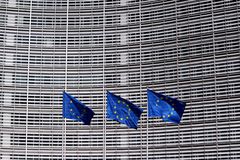 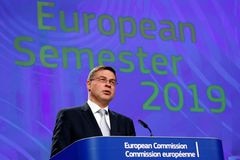