Former PricewaterhouseCoopers chief executive Tom O’Neill, a champion of corporate governance and gender equality and director at several of Canada’s largest companies, died April 3 at the age of 75.

Mr. O’Neill spent 35 years at PwC, leading both the Canadian and global partnerships at the accounting firm. After retiring, he built a second career in boardrooms, serving as chairman of BCE Inc. and Bank of Nova Scotia, along with lead director at family-controlled Loblaw Companies Ltd.

“Tom O’Neill was a formidable business leader and a great human being," said Nicolas Marcoux, chief executive and senior partner at PwC Canada. “He made a positive impact wherever he went, but perhaps what stands out the most for me is the incredible number of individuals that he mentored over the years in his role as CEO of our firm.”

Galen Weston, executive chairman at Loblaw, said he came to rely on Mr. O’Neill’s thoughtful counsel as he took on projects that included restructuring the grocery chain’s operations. “Time and time again, over 15 years, he picked me up, dusted me off and set me on the right track," Mr. Weston said. "He stood beside me as a rock of support through some extraordinarily difficult times.”

Thomas Charles O’Neill was born in Montreal on March 20, 1945, to Charles and Patricia O’Neill. His father was also an accountant, his grandfather was a celebrated conductor and musician. He grew up in Quebec City, then attended Queen’s University, earning a commerce degree in 1967. Queen’s would play a central role in his life: Mr. O’Neill met his wife, Susan, while attending the Kingston school and later served as a trustee for the university and its Smith School of Business.

After graduation, Mr. O’Neill moved to Toronto and joined the audit team at what was then Price Waterhouse. He became a partner in 1978 and went on to hold a number of senior roles, including chief executive of the Canadian firm and chief operating officer for PwC Global in New York.

On Mr. O’Neill’s watch, PwC evolved into one of what are now known as the “big four" global accounting firms, with many of Canada’s largest companies as clients. As CEO, Mr. O’Neill took steps to encourage women to build careers at the firm, after realizing a disproportionate number of female accountants were quitting prior to becoming partners.

PwC was the first major accounting firm to introduce flexible working weeks. It rolled out a program that helped pay child care expenses for employees putting in extended hours, including evenings spent at social events with clients. In the 1980s, Mr. O’Neill revamped PwC’s policy for covering the cost of partners’ club memberships, banning payments to any club that refused to allow female members.

Colleen Johnston, former chief financial officer at Toronto-Dominion Bank, started her career as a 24-year-old junior accountant at PwC, working on teams that reported to Mr. O’Neill. “What made Tom unique was the way he bet on women starting over 40 years ago, backing them with his formidable brand and reputation," Ms. Johnston said. “Many women in senior executive ranks and on corporate boards today are deeply grateful to Tom as a door-opener, cheerleader and loyal friend.”

After retiring from PwC in 2002, Mr. O’Neill joined a number of boards, including Bell Canada, Dofasco, Nexen and the Ontario Teachers’ Pension Plan. The roles gave Mr. O’Neill an opportunity to make diversity a priority, across a number of industries.

“Tom helped us see what we could do, and more importantly he also helped others see that we could and should have the job,” said Maryann Turcke, New York-based chief operating officer for the National Football League and a former Bell Canada executive. “He chose to be great and in the complicated arena of diversity he was the greatest.”

Mr. O’Neill played a central role in a number of boardroom dramas, including a bidding war for Bell Canada in the summer of 2007 between several of the world’s largest asset managers. The Teachers fund kicked off the contest by tabling an offer. Mr. O’Neill, who joined the Bell Canada board in 2003, stepped down from the pension fund’s board over the perceived conflict.

“We spent many hours on the phone between our two cottages, working out how the bid process should proceed in a fair manner," said Jim Leech, former CEO of the pension plan. Teachers eventually tabled the top bid and planned to name Mr. O’Neill as Bell Canada’s chairman and George Cope as CEO, but the transaction fell apart over an accounting issue during 2008 global financial crisis. Mr. Leech said: “Tom and I always joked that the BCE takeover was the biggest and best transaction that never closed.”

After the Bell Canada buyout failed, Mr. O’Neill did eventually become chair, in 2009, while Mr. Cope was made CEO. The telecom company’s share price tripled over next seven years. He stepped down from the Bell Canada board in 2016. “Tom’s steadfast commitment to good governance and corporate responsibility combined with his warm and affable personality made him stand out as a Bay Street leader who was both astute and approachable,” said Mr. Cope, who retired in January.

Mr. O’Neill was a passionate Toronto Maple Leafs fan, known for losing his voice by the second period while watching games. As chair of Scotiabank, he had an office down the hall from chief executive Brian Porter, and the two started most mornings by talking hockey before talking business. At last week’s Scotiabank annual meeting, Mr. Porter said: “Tom was warm, unassuming and jovial, but also decisive, balanced and laser focused, knowing when to offer support, lean in on a fight worth fighting, or bring resolve to hard decisions that needed to be made.”

Over the course of his career, Mr. O’Neill received a number of awards for his work, including the ICAO Award of Outstanding Merit from the accounting community and the Peter Dey Governance Achievement Award for his work on boards. Outside business, Mr. O’Neill volunteered on the board of St. Michael’s Hospital for 14 years and was president of the Toronto Club, a gathering place for business leaders since 1837. He was a fundraiser and trustee at Queen’s University for several decades. “Tom is always the first on his feet for an Oil Thigh [the school’s anthem] with the Queen’s pipers and dancers,” said Mr. Leech, the university’s current chancellor. “My lasting memory will be Tom leading his class in the traditional march at half time in the football game at his 50th Homecoming.”

Mr. O’Neill and his wife have three daughters and seven grandchildren. “Tom’s passing was unexpected, sudden and heartbreaking for myself, our three wonderful daughters and their partners, our adorable grandchildren, family and close friends," Susan O’Neill said. “We will dearly miss his love and support, his insight and advice, his companionship, his stories, and his incredible sense of humour and fun.” The clan often gathered at their cottage on Balsam Lake, northeast of Toronto. The family said Mr. O’Neill loved nothing more than “puttering around with his red, squeaky wheelbarrow and burning a seemingly endless supply of firewood.”

On April 2, Mr. O’Neill suffered a stroke at his cottage and died the next day in a nearby hospital.

A quiet champion of women: Why female executives are so grateful to Tom O’Neill
April 29, 2019 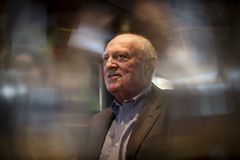