Waterfront Toronto’s renegotiated terms with Sidewalk Labs for a tech-first community on the shores of Lake Ontario include better opportunities for Canadians to prosper from innovations developed there, but leave many unanswered questions, intellectual-property experts say.

The tripartite government agency’s board voted unanimously on Thursday to remain partnered with Google affiliate Sidewalk to develop a 12-acre “smart city” called Quayside on the eastern downtown waterfront. The vote came four months after Sidewalk asked to help plan and implement technology on a site 16 times as large. Its June proposal also contained intellectual-property (IP) terms for Canadians that many IP and patent experts said were unfair to Canadian taxpayers and businesses.

From the project’s beginning, much of the tension has centred around how much prosperity Canadians should be entitled to for letting the Alphabet Inc. subsidiary play in their backyard. With five months of deliberations left before a final Waterfront board vote to go forward with the project, the details around how those issues will be handled need to be worked out.

Data collected from sensors deployed in Quayside could reveal patterns of city living that could be used to build further technologies to be sold the world over. And the value from much of today’s tech comes from its underlying patents, which can become immensely profitable through licensing.

Thursday’s decision puts Waterfront in much greater control of how Sidewalk’s Quayside innovations could be monetized in the public interest, while giving Canadians an upper hand, according to IP experts.

The new deal says Sidewalk would share a to-be-determined percentage of revenues from technologies it pilots in the Toronto community, as opposed to 10 per cent of profits, as it proposed in June. And the agreement includes an expanded “patent pledge” that would grant Canadians access to Sidewalk patents registered globally, instead of just those registered in Canada, giving them the chance to build upon Sidewalk innovations without fear of infringement claims.

“This is much more a public-interest based model of intellectual-property generation and protection,” said Myra Tawfik, a professor of IP commercialization and strategy at the University of Windsor. Jim Hinton, patent lawyer and principal at Own Innovation, an IP strategy firm in Kitchener, Ont., also said the changes were a step in the right direction: “If they get the IP right, they can get the innovation right."

Natalie Giroux, innovation-strategy business lead with Ottawa’s Stratford Managers Corp., said that updates such as the patent pledge were an improvement on previous terms, but that many details were vague, including whether software based on a server elsewhere would be eligible for Waterfront to licence from Sidewalk under certain site-specific agreements.

Law firm Norton Rose Fulbright Canada’s head of innovation, Anthony de Fazekas, called Thursday’s proposals “a more balanced approach.” He said he liked the new revenue-sharing model, which could give taxpayers a greater income stream from Sidewalk’s technologies, but was hoping for more details about how Canadian companies would stand to benefit if they jointly developed technology with Sidewalk.

Kristina Verner, Waterfront’s vice-president of innovation, told The Globe that Sidewalk’s June proposals left many ambiguities for the public agency to grapple with. Much of Sidewalk’s data-governance plans were blown up in the subsequent four months of negotiations after Waterfront said they fell short.

With the renewed talks came a broad reconsideration of how Canadians could benefit from all that data, especially when major critics made data usage and innovation key talking points in opposing the project.

Some details remain undetermined, including the percentage of tech revenue the public can share in, and for how long. But Ms. Verner said that as a whole, Waterfront is moving closer to its goals – “to create an opportunity for Canadian companies to become global leaders and take products to scale.”

But in the next five months of negotiations, she expects IP conversations to be the “most intense.” That’s in part, Ms. Verner said, because Sidewalk parent Alphabet has a massive library of patents and interest in growing it; sharing future IP could mean giving up some control.

Asked about Sidewalk’s role in the negotiations, spokesperson Keerthana Rang said in an e-mail that the company was pleased with the results, and recognized “the wisdom in having existing, trusted government entities and regulators take on this critical work.” 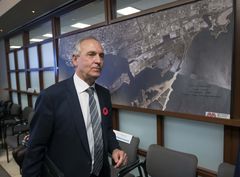