Shares of Facebook Inc rose as much as 4.2 per cent on Thursday, after Chief Executive Officer Mark Zuckerberg said the social network had not seen any meaningful impact on usage or ad sales in the wake of a data privacy scandal.

The company’s shares have sunk 16 per cent, wiping more than $80 billion from its market value since March 16, when the New York Times and London’s Observer newspaper broke news of the use of its data by political consultancy Cambridge Analytica.

Data from Evercore ISI analysts confirmed Zuckerberg’s claim, with Facebook having the top four most downloaded apps globally in March across more than 40 applications tracked in Android and iOS app stores.

Several Wall Street analysts said the stock decline presented a good opportunity to buy into the social network’s previously high-flying shares, although they cautioned that much will still depend on Zuckerberg’s testimony to Congress next week.

“We suspect that looking back a year from now, if not sooner, this episode will have been a uniquely compelling buying opportunity in the mega cap internet space,” Deutsche Bank analysts said.

The data scandal led to the “DeleteFacebook” hashtag trending on Twitter and several celebrities including singer Cher, actor Will Ferrell and Tesla Chief Elon Musk deleted their accounts.

Facebook’s chief operating officer, Sheryl Sandberg, told Bloomberg in an interview on Thursday that a few advertisers had paused spending in the wake of the incident, but that the company was having reassuring conversations about how it has built privacy into its system.

Sandberg also said a tool that allowed a researcher to gain access to personal information of up to 87 million users, complied with a privacy agreement the company signed with the U.S. Federal Trade Commission (FTC) in 2011.

Her comments come after reports that the FTC was investigating the social media company over a possible violation of that agreement, which demands it to get user consent before sharing their information.

“While it’s clear that investor sentiment has been materially impacted by (the) Cambridge Analytica revelations, we believe FB is acting pro-actively and aggressively to tighten its privacy controls and increase the level of transparency into its practices,” Wells Fargo analyst Ken Sena said.

Zuckerberg said on Wednesday he accepted blame for the data leak and should have done more to audit and oversee third-party app developers like the one that Cambridge Analytica hired in 2014.

Asked in the interview whether Zuckerberg was still the right person to head Facebook, Sandberg endorsed him: “I believe deeply in Mark. Mark had a vision for what social services and social sharing could be, and that vision remains really important.”

Zuckerberg will testify about the scandal next week in front of a U.S. congressional committee.

Facebook scans the photos and links you send on Messenger
April 5, 2018 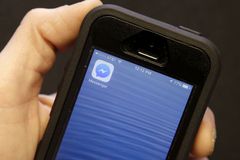 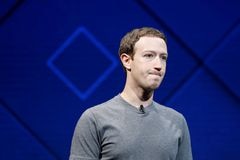 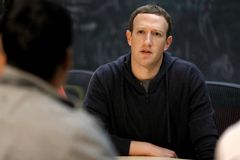