One of the founders of Facedrive Inc., a ride-hailing startup that has seen a precipitous drop in its stock price after a meteoric rise earlier this year, is resigning as chief executive and chair of the company.

Sayan Navaratnam, the 47-year-old entrepreneur behind Facedrive – which refers to itself not as a company, but a “people-and-planet first tech ecosystem” – is departing effective Sept. 1, Facedrive said Thursday in a news release. Chief financial officer Fairy Lee also intends to transition out of her role by Sept. 24, and a director, Bill Kanters, is stepping down as well, the company said.

Mr. Navaratnam is being replaced by Suman Pushparajah, Facedrive’s current chief operating officer. Another founder and director, Junaid Razvi, is taking over as chair.

How did Facedrive, a tiny Canadian tech startup, become a multibillion-dollar company?

The departures follow a steep decline in the company’s share price, which has plummeted from a high of $60 to a little less than $6, a decrease of more than 90 per cent over just seven months. Before the plunge, the company had been a darling of the TSX Venture Exchange, one of its top 50 performers. Facedrive’s market cap of $5-billion in early 2021 briefly rendered it more valuable than companies such as SNC-Lavalin Group Inc., CI Financial Corp. and Maple Leaf Foods Inc.

But Facedrive has struggled to turn a profit to match its sizable valuation. In the first quarter of 2021 Facedrive reported $4.3-million in sales and a loss of $5.9-million.

Mr. Navaratnam did not respond to a request for an interview.

Facedrive’s origins are in ride-hailing, which it marketed as a sustainable alternative to its rivals, promising to offset carbon emissions with tree planting. But it has pivoted to food delivery, online retail and contact tracing for COVID-19.

In February, the Ontario government announced it was providing the company with a $2.5-million grant to help it develop its contract-tracing technology. The devices, which the company calls TraceSCAN, vibrate or beep if users aren’t keeping a safe distance, and are supposed to be used in places where cellphones are banned, such as construction sites.

The company received an initial tranche of $1.5-million from the government in February, with the balance conditional on the delivery of 320,000 TraceSCAN units by July 5. The status of that delivery was unknown to The Globe and Mail at publication deadline. A Facedrive official did not respond to a request for comment.

In the first quarter, Facedrive reported just $75,917 in revenue from its TraceSCAN business. More than 80 per cent of its revenue comes from its food delivery unit.

Working with Laurus Capital Management LLC, a New York-based hedge fund that specialized in microcap companies, Mr. Navaratnam took a security technology company public in 2004 through a shell company called Creative Vistas. The company intended to capitalize on the boom in security spending after the terrorist attacks of Sept. 11, 2001.

Creative Vistas’ stock price skyrocketed more than 500 per cent from January to August in 2007, but the company was losing money and in debt to Laurus for nearly US$16-million. By June, 2008, the share price had fallen nearly 70 per cent. Regulatory filings show that Mr. Navaratnam and Laurus held on to their shares throughout the rise and fall.

Mr. Navaratnam served as a director of biofuels company, PetroAlgae Inc., that Laurus took public in 2008. The stock hit a high of US$26.75, but by the end of 2012, the stock price had plummeted to 85 US cents, and the company never reported any sales. Regulatory filings show no sign Laurus or Mr. Navaratnam sold their stock.

Another founder of the company, Imran Khan, however, has been embroiled in litigation with Facedrive and Mr. Navaratnam over selling his shares. The restriction on selling his shares expired in March, and in July and August, Mr. Khan gave notice through regulatory filings of his intention to sell more than one million common shares. 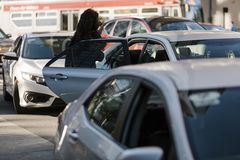