Millions of dollars in subsidies for a Nova Scotia tidal project is just one of the coming announcements as Ottawa boosts riskier forms of renewable energy, says the federal natural resources minister.

Amarjeet Sohi said Friday at a G7 energy ministers meeting that a $30-million contribution to a $117-million tidal project to harness the immense power of the Bay of Fundy tides will be among a series of subsidies given to kickstart innovations in emerging sectors across the country.

Tidal is one of the early investments coming out of the federal Liberals’ $200-million emerging renewable power program, which finished collecting requests for proposals this spring and expects to select four to six investments by the spring of 2019.

Meanwhile, the tidal announcement on the East Coast will be watched closely to see if it can overcome the challenges faced in harnessing the bay’s powerful tides — which have already damaged early test turbines.

The project led by Irish-based DP Energy aims to have turbines producing energy into the grid by 2020, producing enough electricity for over 2,500 homes.

“This is an investment in the future,” said Sohi on the third day of meetings between environment, oceans and energy ministers, when asked about the security of the $30 million in taxpayer investment.

“This is one announcement, and part of many other announcements that we will be making in order to foster that innovation ... to untap the potential that might otherwise go untapped if the government was not there to support it.”

He likened the emerging tidal industry to the early days of oil and gas, saying fossil fuels also might never have emerged without government shouldering some of the risk.

“Providing $30 million in support for this tidal project is still a drop in the bucket compared to the subsidies received by the fossil fuel sector, which receives hundreds of millions to billions annually from the federal government, depending on the year,” he said.

But he says it’s crucial to ensure that the latest project learns from mistakes of the past.

“We hope that DP Energy takes seriously the very valid concerns from Mi’kmaq communities and fishers,” he said, referring to opposition that arose over the potential risk to marine life from the Fundy turbines.

“If this turbine is going to be deployed in 2020 there’s a lot of work to do first, in building relationships and improving environmental monitoring.”

An Irish technical team has been working to determine why the rotor on the Cape Sharp Tidal turbine is not turning.

Halifax-based Emera Inc., which was involved in the troubled project, said this week that experts believe a component failure in the generator caused sufficient damage to prevent the rotor from turning.

It says the turbine worked after it was after deployed in July and that it’s not yet clear when it malfunctioned.

Emera remains a shareholder in Cape Sharp Tidal, but recently announced it was pulling out of the project after co-owner OpenHydro filed for bankruptcy protection.

Sohi said his department has assessed the risks to taxpayer dollars and will keep a careful eye on the experimental projects.

“As we fund these projects, we always monitor these programs very closely. We monitor the success of them,” he said.

During the G7 meeting, delegates also spoke of the emerging potential of offshore wind energy as another option for Canada’s coasts.

“Offshore renewable electricity generation ... is coming into a space of competitiveness,” he said.

Simons told the ministers there are now fewer restrictions on the size of the projects and the wind turbines have grown larger, even as there are higher wind speeds offshore.

As a result, the power generated has been much steadier, and overall production of offshore wind energy has gone from 3 gigawatts in 2010 to 17 gigawatts in 2017, almost all of it in the European Union.

“We are projecting that offshore ... could actually be cheaper than onshore wind (energy) or solar (energy) by the year 2040,” said the energy expert. 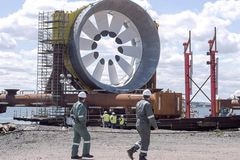 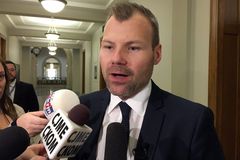