The U.S. Federal Reserve on Wednesday brought its three-year drive to tighten monetary policy to an abrupt end, abandoning projections for any interest rate hikes this year amid signs of an economic slowdown, and saying it would halt the steady decline of its balance sheet in September.

The measures, announced following the end of a two-day policy meeting, mean the Fed’s gradual and sometimes fitful efforts to return monetary policy to a more normal footing will stop well short of what was foreseen in late 2015 when the central bank first moved rates from the near-zero level adopted in response to the 2007-2009 financial crisis and recession.

Having downgraded their U.S. growth, unemployment and inflation forecasts, policy-makers said the Fed’s benchmark overnight interest rate, or fed funds rate, was likely to remain at the current level of between 2.25 percent and 2.50 percent at least through this year, a wholesale shift of their outlook.

Rates are now seen peaking at 2.6 percent, some time in 2020, roughly a percentage point lower than the historic average for the fed funds rate and a sign that the U.S. economy has entered a more sluggish era.

In contrast to projections through much of last year, Fed policy-makers no longer see the need to move rates to a “restrictive” level as a guard against inflation, which remains lodged below the central bank’s 2 percent target.

They also said that as of May they would slow their monthly reduction of as much as $50 billion in asset holdings, and halt them altogether in September, ending what amounted to a second lever of monetary tightening that had run in the background since late 2017.

In terms of interest rates, the new Fed projections knocked the number of hikes expected this year to zero from the two forecast in December, completing a pivot to a less aggressive policy in the face of an apparent jump in economic risks. At least nine of the Fed’s 17 policy-makers reduced their outlook for the fed funds rate, a comparatively large number.

“It may be some time before the outlook for jobs and inflation calls clearly for a change in policy ,” Fed Chairman Jerome Powell said in a news conference following the policy meeting, at which policy-makers reaffirmed they will be “patient” before moving rates again.

“Patient means that we see no need to rush to judgment,” Powell said.

Continued growth and a healthy jobs market remains “the most likely” scenario for the U.S. economy, the Fed’s rate-setting committee said in a policy statement on Wednesday.

But doubts have accumulated, with a slowdown in household spending and business investment at the start of this year possibly signalling an early end to a growth spurt triggered in 2018 by a massive tax cut package and government spending.

The economic projections released on Wednesday showed policy-makers at the median see the U.S. economy growing only 2.1 percent in 2019, a full percentage point below the roughly 3 percent growth that was seen in 2018 and which the Trump administration contends will continue.

The new rate view brings the Fed in line with investors who have argued the central bank would not raise rates this year.

“I didn’t think they’d do it, but they came across as more dovish than what was expected,” said Brian Jacobsen, senior investment strategist for Wells Fargo Asset Management.

The outlook is now also in line with President Donald Trump’s criticism of Fed rate hikes as endangering the recovery, though for the awkward reason that Fed officials do not see his policies having a lasting impact on growth.

Fed funds futures contracts began pricing in a better-than-even chance of a rate cut by next year after the release of the policy statement and projections.

Powell pushed back on that view, saying the U.S. economy is in a “good place” and that the outlook is “positive.”

Still, he said, there are ongoing risks, including those related to Britain’s exit from the European Union, U.S. trade talks with China, and even the outlook for the U.S. economy, which he said the Fed is watching closely.

“The data are not currently sending a signal that we need to move in one direction or another, in my view,” he said. “It’s a great time for us to be patient.”

Benchmark U.S. stock market indexes swung higher after the Fed’s statement was released before giving up the gains later in the trading session, and key Treasury security yields dropped to the lowest levels since early January. The dollar weakened broadly against major trading partners’ currencies.

“The Fed exceeded markets’ dovish expectations, which took a toll on the greenback,” said Joe Manimbo, senior market analyst at Western Union Business Solutions in Washington. “The Fed did a big about-face on policy. The fact that the Fed threw in the towel on a 2019 rate hike was particularly dovish.”

The new economic projections showed weakening on all fronts compared to the Fed’s forecasts from December. In addition to the growth slowdown, the unemployment rate for 2019 is forecast at 3.7 percent, slightly higher than forecast three months ago.

Inflation for the year is now seen at 1.8 percent, compared to the December forecast of 1.9 percent.

“Growth of economic activity has slowed from its solid rate in the fourth quarter,” the Fed said. “Recent indicators point to slower growth of household spending and business fixed investment in the first quarter … overall inflation has declined.” 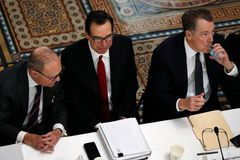 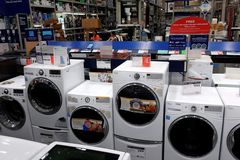 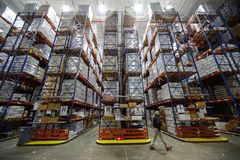