A $40-billion project to export liquefied natural gas from northern British Columbia is rapidly gaining momentum as the co-owners strive toward making an announcement for LNG Canada’s go-ahead within days.

Two of the five partners in Shell-led LNG Canada approved the project on Friday, leaving the remaining three poised to publicly announce plans to forge ahead with constructing the terminal in Kitimat on the West Coast.

A final investment decision by all five co-owners will come any time in the next week to 10 days, a source told The Globe and Mail on Sunday.

Kitimat Mayor Phil Germuth said that in contrast to the ill-fated Northern Gateway oil pipeline proposal, which Ottawa rejected in 2016, there is widespread support for LNG Canada. “The federal government wants to see this LNG project happen, too. Ottawa knows there is support for LNG from northeast B.C. to Kitimat,” Mr. Germuth said.

PetroChina owns 15 per cent of LNG Canada and Kogas holds a 5-per-cent stake. Royal Dutch Shell (40 per cent), Petronas (25 per cent) and Mitsubishi Corp. (15 per cent) have yet to announce their respective final investment decisions.

Susannah Pierce, director of external relations at LNG Canada, said Sunday that “LNG Canada has not received approval from its joint venture participants on their final investment decision. If and when it does, it will make an announcement.”

Tara Lemay, a spokeswoman for Shell Canada, which is owned by Royal Dutch Shell, added that the consortium as a whole is continuing its due diligence on the plans to export LNG to Asia. “The LNG Canada team has submitted an investment proposal to joint venture participants for review,” she said in a statement. “Each joint venture participant is required to make an independent investment decision based on their assessment of the proposal.”

Plans call for up to $40-billion to be invested, including TransCanada Corp.’s proposed $4.8-billion Coastal GasLink pipeline route that would transport natural gas from northeast B.C. to the planned Kitimat terminal.

The federal Liberal government is eager for some positive news on energy megaprojects as it faces an angry backlash in resource-rich Western Canada over the delays to the Trans Mountain oil pipeline expansion project and new environmental assessment legislation that is criticized as overly burdensome for industry.

Prime Minister Justin Trudeau met last Tuesday in New York with Royal Dutch Shell chief executive Ben van Beurden and said on Twitter that they discussed how the government and the company “can work together to advance energy projects that are good for our economy and our environment.”

The Globe and Mail learned last week that Ottawa has told LNG Canada that it agrees the Kitimat terminal will need to be constructed from imported LNG modules, a position that, if endorsed by federal agencies, would avoid hefty tariffs.

Ellis Ross, the Liberal member of the B.C. Legislature whose riding includes Kitimat, said LNG Canada is still waiting for the BC NDP minority government to implement promised tax relief. That LNG legislation could be introduced as early as this week when the fall session of the provincial legislature begins, he said.

Although the NDP government cannot count on passing the bill, Mr. Ross and the Opposition BC Liberals have been champions of LNG and would be unlikely to throw a wrench in the works.

For the NDP government led by Premier John Horgan, a final investment decision would be a major coup – securing the largest single private-sector investment in the province’s history.

The former BC Liberal government created the strategy to build an LNG industry, but LNG Canada’s co-owners backed away from a final investment decision two years ago, saying the economics did not work at that time. Since then, the BC NDP promised a new tax framework offering additional incentives.

However, the Horgan government will face a challenge accounting for the large increase in greenhouse gas emissions that an LNG facility will create. A new climate action plan is due out this fall, which will show how the government plans to achieve its promised reductions in GHG emissions. 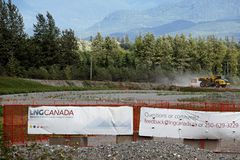 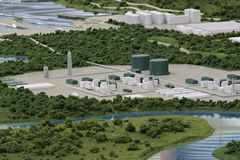 Follow Brent Jang, Justine Hunter and Shawn McCarthy on Twitter @brentcjang @justine_hunter @smccarthy55
Report an error Editorial code of conduct
Due to technical reasons, we have temporarily removed commenting from our articles. We hope to have this fixed soon. Thank you for your patience. If you are looking to give feedback on our new site, please send it along to feedback@globeandmail.com. If you want to write a letter to the editor, please forward to letters@globeandmail.com.
Comments