A chartered plane carrying an unlikely combination of travellers is scheduled to depart Nicaragua for Canada on Monday: temporary foreign workers bound for commercial bee operations, and Canadians who had been stranded in Central America amid the COVID-19 pandemic.

Flights out of the capital of Managua have been suspended as international travel slows to a near standstill, complicating efforts to bring workers into Canada to help manage the spring hive-building season – a vital time when bees reproduce and burgeon into healthy colonies. Led by a queen that lays up to 2,000 eggs each day, honey bees are good for more than their name implies; they are critical to the cross-pollination of fruits, vegetables and canola.

To stave off a labour shortage that could impact the food supply chain and hurt the beekeeping industry, the Canadian Honey Council took matters into its own hands. At a cost of roughly $200,000, the council chartered a plane to fly 80 skilled workers from Nicaragua to Canada, touching down first in Calgary, and then continuing east to Saskatoon, Brandon and Toronto.

“I’m expecting 10 guys, and it’s very important that they get here,” said Bryan Ash, a partner at Ash Apiaries, a large family run beekeeping operation that cross-pollinates orchards in B.C., and makes honey in Manitoba. He is one of the three dozen beekeepers who will repay the council for their portion of seats on the flight.

The Nicaraguan labourers are among the upward of 60,000 seasonal farm and other temporary workers who come to Canada each year – an essential infusion of labour into the agriculture sector. The federal government last month allowed the entry of foreign workers, stipulating that they must quarantine for 14 days. But travel has been delayed because visa offices in foreign countries have been closed and commercial flights have become scarce.

When the honey council started looking into chartering a flight, executive director Rod Scarlett reached out to Global Affairs Canada. “We have never been involved in any of this stuff, so I wanted to make sure we were covering our bases,” he said. “We also asked, ‘Do you need people coming out?’ ” The answer was yes. About 40 Canadians were expected to board the same flight.

“[The Canadian Honey Council] has been co-ordinating directly with the Canadian embassy in Managua on arrangements and to offer seats to Canadians wishing to return to Canada,” Global Affairs spokeswoman Krystyna Dodds said in an e-mail.

Mr. Ash flew nine workers into Canada in February, before the pandemic shut down most economic activity. That is about half as many workers as would typically have arrived by this time of year. (He tried to fly in several other men in recent weeks, but they were twice turned away at the Managua airport because of rapidly evolving border controls.)

Ash Apiaries manages thousands of colonies, also known as hives. Each colony can have as many as 80,000 bees. A few thousand of Mr. Ash’s colonies are already in the Okanagan Valley, where they winter in warmer weather. Soon, his beekeepers will need to transport the insects on trailers – 700 colonies per load – to apple and cherry orchards that need cross-pollination in order to bear fruit.

“The cherry growers that we work with in B.C. are very nervous,” Mr. Ash said. “They want their cherries pollinated.”

Keeping his eye on overnight and daytime temperatures, Mr. Ash suspects he will also imminently need to move 8,000 colonies from his indoor temperature-controlled facility in Gilbert Plains, Man., to the outdoors, where they will forage for the pollen and nectar that will feed the hive and form the basis for honey. Pussy willows are starting to sprout in the Prairie province. Time is of the essence.

Federal Agriculture Minister Marie-Claude Bibeau told The Globe and Mail that her understanding was that approximately 1,000 temporary foreign workers arrived for work in the agricultural sector last week, with an additional 3,000 to 4,000 expected to come this week.

"It’s going obviously slower than it would normally go, but still, we’re proceeding,” Ms. Bibeau said. “We do anticipate a shortfall [in temporary foreign workers]. It’s still hard to say how many. Is it going to be 70 per cent that will be coming? Will it be 80 per cent? It’s hard to tell.”

Ms. Bibeau encouraged out-of-work Canadians to put up their hand for badly needed farm labour, but Mr. Scarlett said managing bee colonies requires technique that develops with experience. Workers need to be able to identify the queen amid tens of thousands of worker bees and hundreds of males, known as drones; if the queen is not laying eggs up to standard, she will be killed and replaced.

The workers need to have a keen eye to detect mite infestations that could decimate a hive, and they must feed the bees enough nectar and pollen patties to stave off starvation. Wearing a jacket and veil but oftentimes working with bare hands, workers must also be prepared to be stung dozens of times a day (experienced beekeepers build up an immunity to the venom).

According to the honey council, there are approximately 10,000 beekeepers operating a total of 725,000 honeybee colonies from coast to coast. While some hives are managed by hobbyists, the vast majority are run by commercial beekeepers. “The biggest concern that commercial operations have is labour,” Mr. Scarlett said.

The workers and Canadians aboard the chartered flight arriving Monday will have their temperatures taken before boarding and must wear masks for the duration of the journey to protect against the potential spread of the virus.

“We’re happy we can get two things done at once," Mr. Scarlett said. "It’s such a screwed up world right now. It’s nice to be able to provide Canadians the opportunity to get home.” 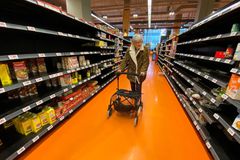 U.S. stores try to stay relevant while their doors are closed
April 12, 2020 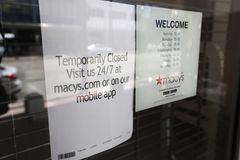