Canadian flour mills and sugar refineries are working around the clock to meet the surge in demand caused by the coronavirus pandemic, as consumers stock their pantries and bakers produce more bread and confections.

With a sales spike of roughly 25 per cent in the past couple of weeks, Prairie Flour Mills Ltd. has run out of the bags it typically uses to package its flour and has had trouble securing carriers with enough capacity to move the additional load. The Manitoba company usually packs 35 different products, but as co-owner Clayton Manness put it in an interview, “We’re just trying to get ordinary flour out the door.”

While many businesses have been shut down to slow the spread of the novel coronavirus, food suppliers are considered essential services and are permitted to continue to operate. As key ingredients in many foods and beverages, flour and sugar are critical to the continuity of the supply chain.

Anxieties around the virus have led to panic buying at grocery stores, which tend to stock on a “just enough, just in time” basis. Shoppers are not only loading up on staple goods because of the continuing uncertainty, but also turning to baking as a way to pass the time in self-isolation and entertain their school-aged children.

Unable to secure flour from depleted local grocery stores, some bakers have decided to go straight to the source. About two weeks ago, the phones at Brant Flour Mills in Ontario started ringing with people looking to buy flour for use at home or in small bakeries. Under normal circumstances, the mill sells almost entirely to commercial bakers and flour wholesalers.

Owner Volker Storjohann said one man paid $330 dollars to the mill after driving nearly three hours to pick up 11 bags of flour, and a home-baker retrieved a single bag of flour from the back of his van, leaving cash in exchange. The mill has since shut down direct-to-consumer sales in order to concentrate on its core business and minimize contact with the public.

Brant Flour Mills is pouring more flour for its major clients, too. “All of a sudden, one of my larger bakery customers who used to order a truckload [of 15,000 kilograms] every 10 days is now ordering a truckload every six days,” Mr. Storjohann said. “I said to the buyer, ‘I guess you’re making a lot more bread in these times?’ and he just said, ‘Yes.’ ” Mr. Storjohann noted that because bread has a relatively short shelf-life, changes in demand are very quickly reflected in flour sales.

About 10 per cent of the wheat grown in Canada goes toward domestic flour milling, said Chuck Penner, president of LeftField Commodity Research, which provides market analysis for Canadian crops. The rest of the wheat, he said, is used for livestock feed or gets exported to foreign markets.

The price of wheat, in U.S. dollars per bushel, is up 8 per cent this month. The increase, Mr. Penner said, is due to a combination of factors, including speculation that Russia may restrict exports of wheat in order to protect domestic markets amid the pandemic. Russia, the world’s largest wheat exporter, announced a proposal on Friday to limit the export of grains for three months.

How long the surge in demand for flour will last depends on what, exactly, consumers are doing with it, Mr. Penner said. Are people using it immediately, or are they simply stocking their pantries?

“It would be nice if some of the positive changes in people’s lives, in terms of learning to cook more on their own or eat more meals together as families, remained in place after [the social distancing measures] are all said and done,” he said. “But there’s a certain amount that’s just the panic situation causing this bump.”

Sugar — a basic ingredient in bread, baked goods and many processed foods — has also been in higher demand in recent weeks.

Redpath Sugar Ltd. is running its Toronto production lines 24 hours a day, seven days a week, in order to meet the increased demand from its retail clients and food-manufacturing customers, particularly those that make breads and cereals.

“Right now, we don’t anticipate there will be any production or supply problems on our end,” said Nancy Gavin, manager of brand development for Redpath. “It’s really about getting it from our warehouse to the retailer’s warehouse and into the stores. I think they just need time to replenish.”

She said the company has noticed an increase in social-media postings from people learning to bake or taking their pastry-making skills to the next level. In a message to Instagram followers this week, Redpath said: “While a routine activity such as sweetening your coffee or tea can lift your spirits, baking is a wonderful way to entertain, teach and bring smiles to children who are adapting to the unique challenge of being out of school.⁣”

Lantic Inc., which is traded on the TSX as Rogers Sugar, has also seen a bump in sales to retailers and food manufacturers, making up for any diminishing demand as restaurants have closed their doors to dine-in customers. John Holliday, the company’s president and CEO, said people are still eating three meals a day; it is just a matter of where. “[Demand] is just going to transition from one channel to another channel,” he said, referring to a shift in sales from the food-service sector to food processors.

Employees at both sugar companies must pass health screening before entering the refineries, including having their temperatures taken. Lantic also has two nurses on call to assist with screening and address employee concerns about the virus. 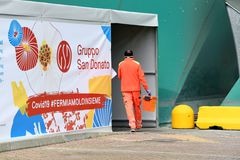