And since the week of June 13, the number of people frequenting office buildings in Toronto’s downtown core has remained roughly the same, indicating growing stability in the number of workers choosing to work from the office despite a recent surge in COVID-19 cases in the city.

The debate over returning to the office has raged over the past two years, as employers have grappled with whether or not to mandate a partial or full return to work for their employees, in the face of a tight labour market.

Over all, this data shows that foot traffic in all major Canadian cities began rising from April onward, following the lifting of COVID-19 restrictions across provinces. Foot traffic was highest during the middle of the week. Although measurements were far below prepandemic levels, between the week of March 28 and the week of July 11, foot traffic in Toronto, Calgary and Vancouver increased by more than 50 per cent.

Toronto in particular saw a sharp rise in the number of people frequenting office buildings in its downtown core – there was an 83-per-cent increase in foot traffic over the same period. Ontario lifted most of its COVID-19 restrictions in late March, including gathering restrictions and mask mandates.

Montreal’s downtown core foot traffic increased by 46 per cent, while Edmonton’s rose by 43 per cent in the same time period.

Weekly foot traffic in downtowns of 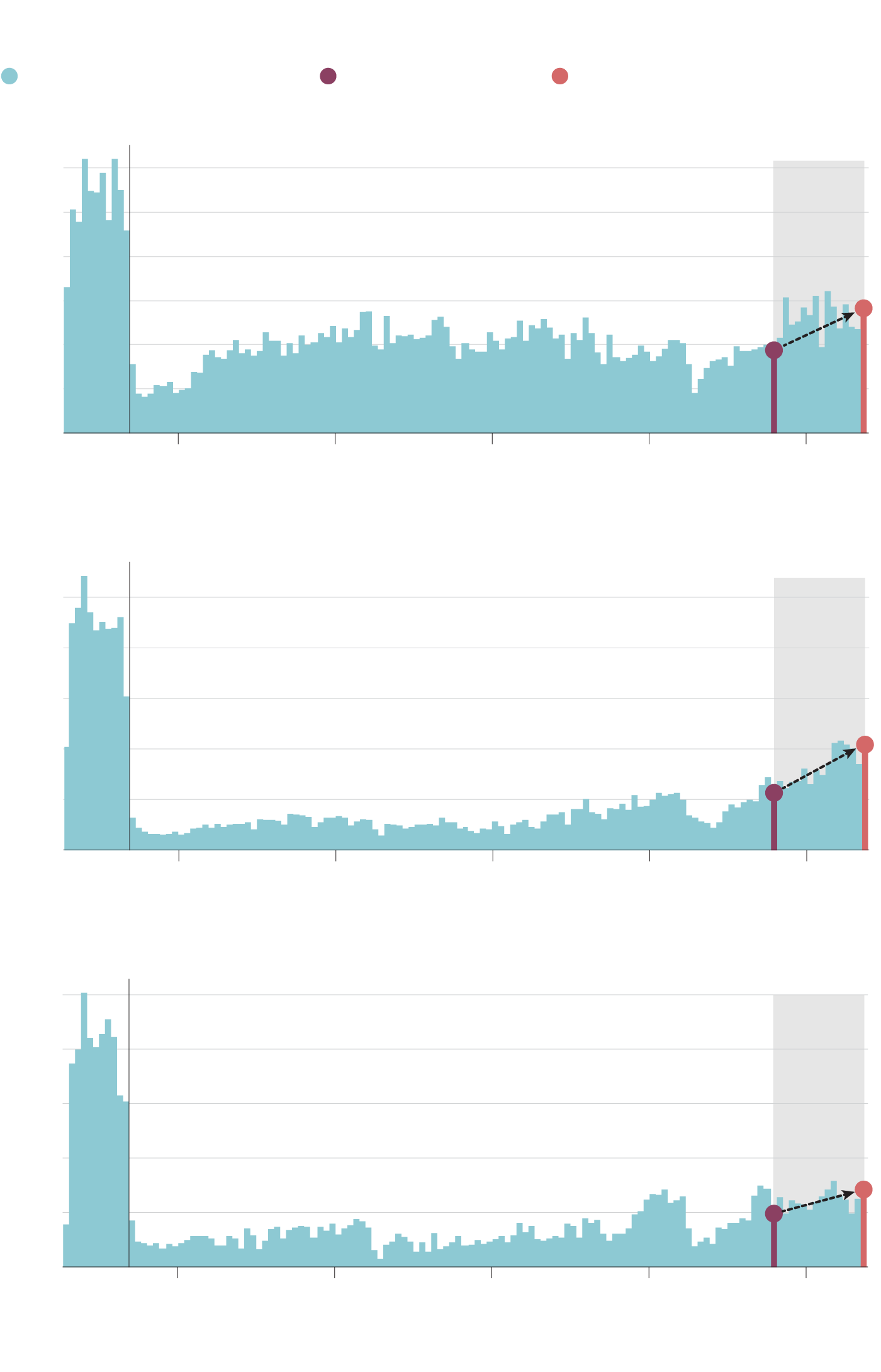 But those numbers were still nowhere close to what downtown core foot traffic was like before the pandemic hit in early March, 2020. For example, in both Montreal and Toronto, foot traffic for the week of July 11, 2022, was 55 per cent less than what it was in the first week of March, 2020, just days before the lockdowns began.

The number of people frequenting Toronto’s downtown core during the week of July 11 was 264 per cent higher compared to the same week in 2021, when much of the city was still under heavy gathering restrictions.

“Larger tenants in the downtown cores of cities have started asking their employees to come back into the office two to three times a week,” said Thomas Forr, director of data, analytics and innovation for Avison Young’s Canadian office.

All of the Big Five banks – some of the largest employers in downtown financial districts – have mandated some hybrid form of return to the office. Toronto-Dominion Bank and Royal Bank of Canada, for example, had asked most of their employees to begin returning to the office as of April, 2022, but left it up to individual departments to determine the frequency of in-office days.

Mr. Forr also noted that there are variations in the pace of foot traffic increases depending on the kind of employment in cities. “Ottawa, for example, has a lot more public-sector workers and we have seen a slower back-to-office recovery there. Toronto, Montreal and Vancouver are seeing large increases in traffic this summer.”

The Avison Young data also showed a variation in which days employees tended to work from the office. Across all six major Canadian cities – Toronto, Vancouver, Montreal, Edmonton, Ottawa and Calgary – employees tended to prefer working from the office on Tuesdays, Wednesdays and Thursdays. Foot traffic was 20 per cent lower on Mondays and 23 per cent lower on Fridays.

Many employees have embraced remote work, finding it pleasant to not have to navigate long commutes and, for some, cheaper without child-care costs. For many workers, productivity levels have remained high despite working remotely, leaving the return-to-office argument particularly weak.

The most recent official data on the subject from Statistics Canada indicated that, as of June, 2022, roughly 18 per cent of workers still worked all of their hours from home. About 6.7 per cent of workers spent some hours in the office and some at home on a weekly basis. Comparatively, roughly 20 per cent of Canadians were working from home as of May, 2021, and 40 per cent worked remotely in April, 2020.