Syndicated mortgage loans for real estate projects developed by Fortress Real Developments Inc. are “under considerable stress,” and lenders could face “significant losses,” according to a new report from a court-appointed receiver.

In its first update since it was appointed in April, FAAN Mortgage Administrators Inc. said some of the largest loans provided for Fortress projects are at risk because senior mortgage lenders are moving to foreclose on the properties.

For example, the senior lender for a proposed office complex at the Collier Centre site in Barrie, Ont., has issued a notice of sale for the property, saying the period set to repay its loan has expired. Syndicated mortgage lenders provided $53-million in loans to the project, but senior lenders’ claims on the land have higher priority.

FAAN said it is in talks to find other options to address the default, and said it is possible the commercial tower plan could be converted into a residential development.

“However, the trustee notes that despite its efforts, a sale of the property could result in significant losses to the investors,” FAAN warned in its update report.

The report contains more precise details and numbers on the outstanding loans than were previously available. More than 11,000 investors – most in Ontario – invested $560-million to provide syndicated mortgage loans to Building and Development Mortgages Canada Inc., which raised the money to help finance 44 development projects for Fortress and its partners.

BDMC is owned by Ildina Galati, a former mortgage broker who surrendered her broker license in February as part of a settlement deal with Ontario’s financial regulator. BDMC was the principal mortgage broker for Fortress, and operates from the same office address. Vince Petrozza, co-founder and chief operating officer of Fortress, was also a registered mortgage broker with BDMC until his registration was revoked in February.

In its update, FAAN said it has spent much of its time as receiver dealing with applications from senior lenders who have priority claims on many of the development projects and are seeking to foreclose or seize the properties because of non-payment of their loans.

FAAN said it needs more time and money to do more appraisals of the projects to find the best potential outcomes for the syndicated lenders, whose loans often rank in third place or lower to those of other lenders.

It said it is trying to get Fortress to finance some of its work because BDMC has no cash coming in and is “functionally insolvent.” It said BDMC’s professional costs should not be borne solely by investors, noting Fortress previously covered BDMC’s costs when it had insufficient revenue.

FAAN is also asking the court to appoint law firm Chaitons LLP to represent the individual syndicated mortgage lenders, saying it has received many questions from investors about their options, and is required to tell them to seek independent legal advice.

It said a court-appointed lawyer could protect investors’ individual interests while sparing them the cost of hiring their own lawyers. It recommends paying the law firm a portion of distributions made to investors as projects are wrapped up, and said investors could opt out of representation.

The update report also said Fortress’s Brookdale condominium project in Toronto – which has almost $25-million of syndicated mortgage loans outstanding – is subject to two enforcement actions by a senior lender, which has issued a notice of sale for the land. The syndicated loans rank fourth and fifth behind senior lenders.

FAAN said settlement negotiations with Brookdale’s lenders have “stalled” and the senior lender is looking to enforce its loan and sell the property. FAAN warned investors could face “significant losses.”

“At this time, it is unclear what the outcome for the Brookdale project will be due to the existing defaults under senior loans in excess of $23-million and the numerous additional construction liens that have been asserted,” FAAN said.

It said lenders are also seeking to take control of the Glens of Halton Hills project in Georgetown, north of Toronto, which could result in “significant losses” for syndicated investors owed $14.4-million.

A development in Guelph known as the Dunsire project was put into receivership in December, FAAN said, and ownership of the property is being transferred. Syndicated lenders owed $1.7-million will see “very little recovery,” but some HST refunds may be available to provide “a least a partial recovery,” the report said.

FAAN’s update also said about 35 per cent of the money raised from syndicated lenders was used to pay “development consultant fees,” about half going to the brokers who raised the funds from individual investors, and the other half paid to BDMC in its capacity as the borrowers’ broker and to Fortress.

Some of the syndicated loan money was also retained in reserve by BDMC to make the required interest payments to the same investors who provided the loans, FAAN said.

In more positive news, FAAN said it appears a development project in Bowmanville, Ont., will be refinanced with new senior lenders, but $5.3-million of syndicated loans will remain outstanding and subordinated to the new senior lenders.

FAAN also said a Victoria building project has been sold, and the full amount owed to the syndicated lenders has been collected. However, FAAN is seeking court approval to repay lenders only half the amount of their loans and to put the other half in a separate reserve account.

It said it will report to the court by Oct. 31 on its progress on the Fortress projects and its recommended proposal for the use of the reserved funds.

FAAN said senior loans on many other projects have matured or come due, and it is facing multiple requests to agree to further postpone BDMC’s subordinated loans to allow the senior loans to be refinanced. It said it is still seeking information to decide how to deal with the requests, but added that many of the projects will fail if the lending cannot be secured, and many of the syndicated loan agreements required BDMC to grant senior debt refinancing postponements. 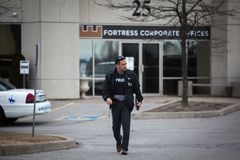