A two-year-old family feud has spilled into the open with auto-parts magnate Frank Stronach launching a $520-million lawsuit against daughter Belinda Stronach and her perceived allies, alleging that they mismanaged his fortune and froze him out of the business he built over six decades.

Mr. Stronach, the 86-year-old founder of global auto-parts company Magna International Inc. and owner of numerous horse-racing tracks, alleges that his 52-year-old daughter, as chairwoman and president of holding company The Stronach Group, used “a series of covert and unlawful actions … to the overwhelming detriment of the other members of the Stronach family."

The founder, who left the family company in 2013 to run for political office in his native Austria then returned the following year, also alleges that “corporate documents were falsified as part of a scheme … to limit or eliminate Frank’s role in running the Stronach family business.”

The claims were made by Mr. Stronach and his wife, Elfriede, against their daughter and the trusts set up for her two children in a 73-page lawsuit filed Oct. 1 in the Ontario Superior Court of Justice. Until the suit was filed, the two-year dispute between Mr. Stronach and his daughter had played out in private.

The allegations have not been tested in court. Mr. Stronach is asking the courts to remove his daughter and her perceived allies from leadership roles at the family company and on a number of family trusts, in addition to claiming $520-million in damages.

In a statement, lawyers for Mr. Stronach said: “Frank and Elfriede Stronach regret having to commence proceedings in the Ontario Superior Court against their daughter Belinda, [Stronach Group chief executive] Alon Ossip and others. They only did so as a last resort, after having made considerable efforts over a period of almost two years to resolve the matters at issue on a consensual basis.”

Ms. Stronach, who was CEO of Magna for two years prior to entering federal politics and becoming a cabinet minister, said Wednesday in an e-mail: “Family relationships within a business can be challenging. My children and I love my father. However, his allegations are untrue and we will be responding formally to the statement of claim in the normal course of the court process.”

Court documents show Mr. Stronach has been fighting with his daughter for control of the family company and various family trusts for almost two years. The documents allege that he was consistently denied access to financial information on the family holding company. The Stronach Group is a collection of 253 family controlled businesses, and the court documents show that in November, 2016, Belinda Stronach told her father that the enterprise faced “significant liquidity issues.”

The lawsuit alleges that the family holding company ran into financial troubles while Mr. Stronach was active in Austrian politics, and claims Belinda Stronach and other executives “seriously neglected the business of The Stronach Group and abused their positions of authority. They did so in order to conceal significant cash-flow issues, and to favour their own personal interests."

Mr. Stronach is also targeting Mr. Ossip, a long-time adviser to the family. In court documents. Mr. Stronach said the pair refused “legitimate business expenditures” that he proposed, and that “Belinda and Alon were confrontational, disrespectful and insubordinate.”

“These allegations are baseless and are not grounded in fact or reality. Alon has always honoured his obligations and acted in good faith to preserve and grow the Stronach family’s assets and to protect the interests of all members of the family," said Paul Deegan, a spokesman for Mr. Ossip.

“Frank Stronach was a great auto-parts entrepreneur, but his recent excessive spending and numerous failed ventures put his family’s wealth at risk,” Mr. Deegan said in an e-mail. "This is a dispute between Stronach family members that should be resolved between family members.”

In his statement of claim, Mr. Stronach alleges that Ms. Stronach “routinely submitted” hundreds of thousands of dollars in personal expenses as business expenses, including reimbursement for parties, family vacations, limousine rides and expensive meals.

Mr. Stronach also takes aim at Ms. Stronach’s decision to sell some assets of The Stronach Group, including development lands inside Ontario’s Greenbelt, alleging that the proposed divestiture is at prices substantially less than their purchase price. In addition, Mr. Stronach takes issue with the planned sale of the company’s airplane, saying he was not informed or consulted with about the decision.

And Mr. Stronach alleges that Ms. Stronach demanded in January, 2018, that $19-million be distributed to various trusts controlled by her and her brother at a time when The Stronach Group was facing “serious liquidity issues.”

Mr. Stronach founded Magna in 1957 after arriving in Canada as an immigrant with $200 in his pocket, and he built the firm, based in Aurora, Ont., into one of the world’s largest auto-parts companies; his daughter was a long-time Magna executive. Mr. Stronach courted controversy by consistently being Canada’s top-paid executive, taking home $40-million in 2007.

Mr. Stronach gave up control of Magna in 2010 as part of a controversial transaction that saw the family sell their multiple voting shares back to the company for $863-million. Under the leadership of outside executives, Magna has continued to expand internationally, and the company is now worth $21-billion.

The Stronach family also controls real estate and a number of horse-racing facilities, including storied Santa Anita Park in California and Pimlico Race Course in Maryland, and owns stables of thoroughbred horses.

Ms. Stronach oversaw the auto parts, real estate and horse-racing businesses prior to running for the federal Conservatives in 2004, then crossing the floor to become a Liberal cabinet minister in the government of Prime Minister Paul Martin. She has two children, named Frank and Nicole, with former husband Donald Walker, now the CEO of Magna. 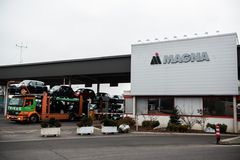