Freshii Inc. is adding new members to its board of directors and senior leadership team as it attempts to improve disappointing same-store sales and reverse a falling stock price.

The healthy fast-food chain appointed William Schultz to its board, and Oliver Rodbard as its vice-president of operations. The news comes one month after Freshii recruited a new chief financial officer, Daniel Haroun, who will start on Aug. 26.

Mr. Schultz most recently was president of Coca-Cola Refreshments in Canada, with previous stints at Procter & Gamble, Mars Inc. and Georgia-Pacific. “Freshii is poised for long-term growth, with an impressive management team and board,” he said in a news release.

Mr. Rodbard, who will oversee Freshii’s restaurant operations, spent the past 12 years at Yum! Brands Inc., which owns Taco Bell, KFC and Pizza Hut. Mr. Rodbard worked in various roles, and was most recently part of the senior management team at Pizza Hut Canada.

In addition to its restaurants, Freshii supplies meals for some Air Canada flights and 100 Walmart stores across the country.

Shares in Freshii closed up 7.9 per cent on the Toronto Stock Exchange on Tuesday.

Investors and analysts have been looking for the company to strengthen its senior management and board in the face of mounting competition, weak results and a stock price that has dropped about 79 per cent since Freshii went public in January, 2017.

Freshii was early to healthy eating trends in the quick-service sector when it opened its first location in 2005, and its salads and green smoothies were popular. Mr. Corrin rapidly expanded the chain (it now has 446 stores in 16 countries) and when he took it public just over two years ago, he planned to more than triple the store count to 840 and increase systemwide sales to US$365-million by the end of fiscal 2019.

He walked back those plans after Freshii ran into delays opening stores, and investors drove the stock down. In November, 2018, the company slashed staff at its Toronto headquarters by about 20 per cent.

Freshii’s same-store sales growth has fallen in each of the past three quarters. In the first quarter of 2019, net income plummeted 75 per cent to US$100,000 compared with the same quarter the year before. However, systemwide sales grew 11 per cent to US$43.2-million as Freshii added restaurants to its network.

The company has also been closing or transferring ownership of underperforming stores and tweaking its menu, such as the proteins it offers. Mr. Corrin said in May that Freshii is eliminating beef except where it remains a top seller, and will “really go deep on elevating our chicken.” Freshii’s falafel will also experience an “elevation” while its tofu will undergo an “evolution,” he said.

Mr. Corrin, who controls Freshii through multiple-voting shares, has acknowledged on conference calls that the company had moved away from offering limited-time menu items, which help bring customers into stores. He’s also said he recognized Freshii needed to hire more leaders with experience at public companies and in the restaurant industry.

“Late last year, I turned the lens on myself and evaluated my own performance,” Mr. Corrin said on a conference call in May, adding that different skills were required to grow the company. “So in short, I fired myself. I then rehired myself as a new CEO with a new focus on what’s needed to continue our growth.” 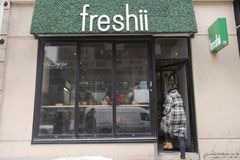 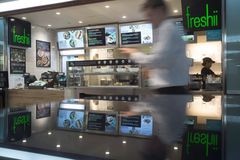