“We typically invest in technology companies outside major tech centres in the U.S., where you find more ‘bootstrapped’ companies” – firms that have been financed by friends, families and angel investors – rather than “all or nothing high-flyers” that have raised lots of venture capital amid heightened expectations, said Richard Maclean, managing partner of Charlotte, N.C.-based Frontier. “We really find the Canadian markets and Canadian approach to building these companies fits our philosophy.... What [Agreement Express] has achieved with limited resources ... is very impressive.”

That narrative might not quite fit the current image of a teeming Canadian tech sector attracting levels of venture financing not seen since the dot-com boom. But it is a reminder that Canada’s tech renaissance is fairly recent, predated by a stretch when many firms struggled to make do with little outside financing and venture capital was scarce. “There are more bootstrapped companies than VC-funded ones” in Canada, said Ed Bryant, chief executive of Ottawa-based Sampford Advisors, a technology-focused mergers and acquisitions advisory firm. “VC funding in Canada per capita is a fraction of U.S. levels. It has started to get better, but is not anywhere near levels” south of the border.

However, he said that has also made bootstrapped firms attractive to private equity investors as “expectations on valuations are much more reasonable” than firms that have raised big venture-capital funding in recent years.

Agreement Express grew out of a Vancouver systems-integration consultancy about 12 years ago when it developed digital document and signature software. The company, with about 110 employees, now provides a software platform that enables its more than 130 financial services and payments processing clients – including Royal Bank of Canada, National Bank of Canada, Visa and Global Payments – to automatically bring new customers on board simply and quickly.

The firm, with more than $10-million in annualized revenue, has grown by an average of about 40 per cent annually over the last five years, but experienced a tenfold increase in the number of end users in the past 18 months as its corporate customers increasingly connected to distributors and other partners using its platform. “The opportunity in front of us to advance that globally is fantastic,” said Agreement Express CEO Mike Gardner. “Our No. 1 goal has been to find a capital partner to support that.”

Most of Frontier’s money will be used to buy out early investors, but Mr. Maclean said the firm is also “putting significant capital on the balance sheet for the next stage of growth.”

Frontier, founded in 1999, typically invests between US$25-million and US$75-million for controlling stakes in software companies valued at less than US$100-million. 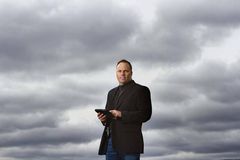