It will take several weeks for rail service to return to normal even if blockades come to an immediate end, said Transport Minister Marc Garneau, who also condemned the “extremely reckless” actions of protesters who set a fire under a moving train.

Speaking with reporters on Parliament Hill, Mr. Garneau said Canadian National Railway Co. officials recently informed him that the company had 184 trains parked in Canada and the United States as a result of rail disruptions.

A backlog of that size will take “many, many weeks” to resolve before service returns to normal, he said.

“If you lined all that up, you’d go from here in Ottawa past Montreal end-to-end. That’s a lot of stuff that needs to move and we hope it’s going to move as soon as possible,” he said.

Protesters lit a fire on the train tracks west of the Tyendinaga Mohawk camp off Depot Road on Wednesday afternoon. Flames could be seen on the south side of the rail line from the overpass above the camp. In total, eight freight trains have passed through the camp. A growing number of protesters gathered at the camp Wednesday.

About 20 Ontario Provincial Police officers were monitoring the demonstration.

“This was an extremely reckless act,” Mr. Garneau said. “I saw the video this morning and [it was] something that not only put in danger the life of the people who were actually lighting this fire under a moving train, but also could have been very dangerous for many other people. Because what if this train was carrying dangerous materials? It could have ignited, depending on the size of the fire. This is a totally reckless act and I hope that we’re not going to see this kind of thing [again].”

Activists continue to mount sporadic rail blockades and protests in support of Wet’suwet’en hereditary chiefs who oppose a gas pipeline project through their traditional territory in northern British Columbia and want the RCMP to leave the area.

On Monday, the OPP cleared a blockade set by Tyendinaga Mohawk protesters showing their solidarity with the hereditary chiefs. The Tyendinaga protesters had cut CN’s main eastern Canada railway link for weeks. Ten people were charged with mischief and disobeying a court order.

Mr. Garneau said it will take several months before the full economic impact is known.

“There’s 50 grain ships on the West Coast waiting to pick up grain,” he said. “There are unfortunately going to be companies that come to ports in Canada, who are going to move somewhere else because there’s just too much of a backlog and they’re too worried about the reliability of our Canadian ports because of what is happening.”

CN has laid off 450 people in its eastern Canadian operations, while Via Rail’s layoffs total almost 1,000 since much of train traffic east of Toronto was halted.

Karl-Philip Marchand Giguere, a Via spokesman, said the passenger railway is working with CN, the track owner, on returning to normal service. “As a significant number of freight trains are currently on the network, a specific date for the return of service has not yet been determined at this time,” he said.

A spokesman for the Teamsters Canada Rail Conference, which represents CN’s train operators, said there have been no new layoffs in the past week. But many CN employees who work when they are called in are sitting at home not getting paid.

“We’re still faced with hundreds of members who aren’t getting that call to go into work,” Christopher Monette said. “They haven’t received any [layoff] papers yet from the company, but they are off the [assignment list] and they aren’t getting those calls to go and drive those trains.” ​

CN did not respond to several requests to comment.

At the Port of Hamilton at the east end of Lake Ontario, the disruption of train service has affected the arrival of gasoline, asphalt and other supplies. “In some cases, port terminals have supplies … they can draw upon for days or weeks,” said Larissa Fenn, a spokeswoman for the port. “But that’s not sustainable for very long, and an extended disruption would likely have effects on consumer gas stations, road projects, southern Ontario construction projects and other everyday uses.”

Police say the court injunction obtained by CN earlier this month covers the tracks where Tyendinaga Mohawks are protesting. Their encampment is not within CN’s right of way, but the activities of the protesters have been taking place on CN property, OPP spokesman Bill Dickson said.

“There is definitely criminal activity involved here. The railway right of way is private property. There are fires being set. And potentially damage being done. So yes, there is the potential for charges to be laid,” he said. 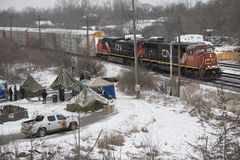