Derailments, collisions and other railway incidents soared in the first four months of 2018 as rail carriers worked to meet a rise in freight volumes amid a harsh winter.

“We need to do better. There is no question about it,” Mr. Garneau said in an interview.

According to data from the Transportation Safety Board (TSB), railway incidents rose by 16 per cent in the first four months of 2018, from the same period a year earlier. The data, which cover CN and CP as well as VIA Rail Canada Inc. and short-line railways, show a 22-per-cent increase from the five-year average even as distance travelled declined by 1 per cent.

Mr. Garneau said he is “very concerned about any derailment” or other incident and will be sending letters to the heads of CN and CP railways to request meetings to discuss the rise in rail accidents and to ask how they will reduce them.

Gérald Gauthier, acting president of industry group Railway Association of Canada, said derailments and other incidents are more likely in the winter, but said he was unable to say why the number rose so sharply in the first quarter.

“Honestly, we don’t know,” he said in an interview. “Can we make a trend out of this? I would caution you against doing this. But we are looking into this.”

Freight train service in the past winter was slowed by harsh weather and a rise in commodities and other shipments that led to congestion and customer complaints.

CN announced the departure of its CEO, apologized to customers and said it was increasing its capital spending to clear the freight backlog. CN said it is adding hundreds of locomotives and rail cars, in addition to hiring 1,250 conductors and expanding its railway network.

Mr. Gauthier said cold temperatures and snow – not mistakes made in haste by new crews or railways feeling pressures from governments and shippers – contributed to the rise.

The number of incidents in CN’s Canadian operations rose by 23 per cent in the first four months of 2018, the TSB said. During the same period, the number of carloads hauled by the Montreal-based carrier rose by 3.5 per cent, according to company data.

The past winter aside, CN says its domestic safety record has improved every year since 2014. “In terms of overall safety, 2017 was the second-best year in our history,” said Patrick Waldron, a spokesman for the Montreal-based company.

Calgary-based CP reported a 7-per-cent rise in incidents in the first four months of 2018. In 2017, CP’s rail incidents rose by 40 per cent, the TSB said.

Asked about the rise in incidents, CP issued a statement. “Operating safely is integral to our long-term success. Our unwavering commitment to safety is why CP has led the industry – across North America – for 12 consecutive years with the lowest Federal Railroad Administration train accident frequency per million miles,” Jeremy Berry, a CP spokesman, said in an e-mail.

The TSB, an independent investigator of rail, pipeline, aviation and marine mishaps, said most of the rise in the industry’s incidents is due to an increase in derailments and collisions in rail yards, which occur at low speed and cause “limited damage.”

The TSB data are not ranked by severity or amount of damage. Rather, the incidents are listed by type or location. The number of derailments on main tracks increased to 14 from two in the first four months of 2018, twice the five-year average. There were 51 incidents involving dangerous goods, up from 36 in the year-earlier period. Deaths of people at crossings or along tracks fell to 10 from 18.

“We closely monitor the increases in these types of occurrences as part of our ongoing investigations, and we bring safety deficiencies to the attention of the regulator and industry stakeholders, particularly if the deficiencies are systemic in nature, ” said Josée Coallier, a TSB spokeswoman.

Alan Quilley, a consultant and a former director of safety for CN, said there is “absolutely” a link between demands on a company’s leadership and safety lapses.

“I think the pressure on management to produce financial results always pressures the things like safety, [or] making it a good place to work,” Mr. Quilley said by phone.

He said the rail industry is a difficult one in which to operate safely, especially in winter. But he criticized the industry for its focus on profits and production and for failing to come up with new ways to reduce incidents. He notes that over time, railway incident rates have not changed much. That’s the case in other businesses and in broader society, he said.

“We have institutionalized the way we approach safety and we aren’t innovating,” Mr. Quilley said by phone. “You start at a company and we give you an orientation. You watch a DVD to tell you that safety is important but then demonstrate that it really isn’t because we don’t talk about it very much – once a week at a safety meeting or even once a day at a safety meeting. But most of the day is talking about production.” 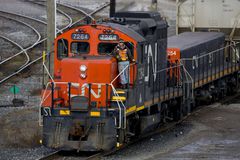 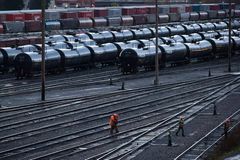