A strike by 48,000 General Motors Co. workers at 33 auto factories and 22 parts distribution warehouses in the United States threatens to halt production at several Ontario vehicle parts and assembly plants.

The North American auto-making sector runs on just-in-time supply chains, in which parts and automobiles cross both borders several times before final assembly of the vehicles. A one-day shutdown of any part of that chain will quickly bring most vehicle and parts production to a halt, said Flavio Volpe, president of the Automotive Parts Manufacturers’ Association. The association represents most of Ontario’s auto-parts makers, which employ 100,000 people in Ontario and export $18-billion in car parts to the United States every year.

“If U.S. plants are closed, then there are going to be lots of Canadian suppliers, situated on both sides of the border, affected,” said Mr. Volpe, adding car plants can operate just a day or two without new supplies of parts.

“If you’re not making cars in a plant, then you’re not going to take deliveries of parts,” he said by phone.

Negotiators for GM and the United Auto Workers resumed talks on Monday at 10 a.m. ET to resolve a strike that shut down the automaker’s highly profitable U.S. operations.

The UAW on Sunday launched the first company-wide strike at GM in 12 years, saying negotiations toward a new national agreement covering hourly workers had hit an impasse.

The union wants to stop GM from closing the Lordstown, Ohio, factory and an assembly plant in Detroit. The UAW has said workers deserve higher pay after years of record profits for GM in North America.

GM argues the plant shutdowns are necessary responses to market shifts, and that UAW wages and benefits are expensive compared with competing non-union auto plants in southern U.S. states.

David Paterson, a spokesman for GM Canada, said on Monday morning that the Ontario plants have yet to see any impact, but that will change should the strike go on. “We are indeed part of an integrated supply chain and we’ll watch that closely,” Mr. Paterson said.

Mr. Volpe predicted the job action will be short, noting the last U.S. strike was brief, and that a shutdown sends the wrong message to companies looking to invest in production facilities at a time jobs are shifting to Mexico, China and other low-cost countries.

A spokesman for GM parts supplier Magna International Inc. declined to comment on any impact on the Aurora, Ont.-based company. “Like the entire supply base, we are in wait-and-see mode,” said Scott Worden, who declined to provide details on the company’s sales to GM. “We would like to see both sides get back to the negotiating table, working toward an agreement.”

In a statement on Sunday, GM outlined its offer to the union, saying the package included solutions for the Michigan and Ohio assembly plants currently lacking products, US$7-billion in U.S. investment and a signing bonus of US$8,000 per worker.

GM shares were down more than 4 per cent in midafternoon trading on Monday.

U.S. President Donald Trump on Sunday took to Twitter to urge the UAW and GM to “get together and make a deal!”

The International Brotherhood of Teamsters, which transports some GM vehicles to dealerships, said it would honour the UAW’s GM picket lines.

Unifor, the union that represents auto workers in Canada, said in a statement it supports the UAW in its bid for a “fair contract settlement.” Unifor’s collective agreements with GM expire in September, 2020, and September, 2021. Talks with GM will begin next year.

GM’s workers last went out on a brief two-day strike in 2007 during contract talks. A more painful strike occurred in Flint, Mich., in 1998, lasting 54 days and costing the U.S. automaker more than US$2-billion.

The strike will test both the union and GM at a time when the U.S. auto industry is facing slowing sales and rising costs associated with launching electric vehicles and curbing emissions. 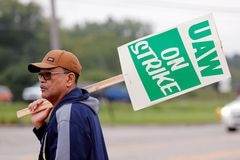 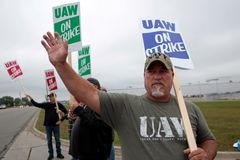