And so it begins, as so many stories begin, with punk rock and beer.

Steve Beauchesne was an avid home brewer and played keyboards in the punk band Constable Brennan. This was before he joined with his father to start Beau’s Brewing Co., their fast-growing regional brewery on the far eastern edge of Ontario.

Back then, he was loyal to an old Italian Farfisa organ, performing to punk crowds and operating Go! Go! Go!, a small record label in Toronto. His day job was even more hardcore, some might joke. He worked in business planning for the Ontario government.

But as Mr. Beauchesne (pronounced Beau-SHANE) approached his 30s, his father Tim proposed a plan. The father had run a small, profitable textile company in the family’s hometown of Vankleek Hill, Ont., near the Ottawa River. But the textile industry had moved overseas, and Tim was casting around for a new line of business. He sat down with his son. Given the many craft beers that his son brought home, the father popped the idea of starting a brewery together. Their first batch was released on Canada Day 2006.

“It’s kind of funny. I really enjoyed my job, and I had a fun sort of hobby going on. But yeah, getting up every day to run a brewery, there was no hesitation on my part,” Mr. Beauchesne said. Now he’s the chief executive officer. His father is still involved, a little less so than at the beginning. Others in the Beauchesne family hold various positions in the company.

Rapid expansion has ensued, almost with a music-industry-like attention to marketing and grabbing the public’s attention, with some unique flavours such as The Tom Green Beer (a collaboration with the comedian, with a chocolate and coffee taste) and an annual Oktober Fest of beer and music. The point is that it’s necessary for a brewery to differentiate itself from others in the ultracompetitive craft beer industry, especially in Ontario. Of the 820 or so breweries in Canada, the lion’s share of about 260 are Ontario based. So, Beau’s profits have been reinvested in the company to keep pace with its growth.

This has meant buying the top technology, but sparingly, only what is absolutely needed, Mr. Beauchesne noted. The decision was made to invest in the best bottling equipment, rather than in greater automation. You’ll still find people unloading bottles from the bottling equipment or filling a keg by hand.

“[Technology] is very much a part of our industry, but it’s not something you’ll find a lot of at Beau’s,” Mr. Beauchesne said. "And to explain that: When Dad and I got the brewery off the ground, we were able to scrape together about $150,000 in investor dollars. That’s nowhere near enough to reasonably start a brewery.

“Since then, we’ve been on this rocket train of growth. It’s like we’ve got high-tech-company growth rates, but a manufacturing company’s need for assets. So, we’ve basically been reinvesting every penny since Day 1, and then leveraging that with as much bank debt as the banks will allow us to do. What that’s meant is that we always have to be really, really thoughtful about how we spend our money,” he said.

It also kept Beau’s very much a regional brewer at the beginning. In the first five years, the company didn’t distribute further west past Kingston and concentrated instead on the Ottawa area. Only after getting a footing in Ottawa did the company then expand into the cutthroat Toronto market, all to avoid the danger of growing too quickly.

Expanding in stages then led to entering the labyrinth of regulation otherwise known as the approval process for distributing beer into Quebec. But once approval came, the brewery’s small-town location didn’t seem such a disadvantage. 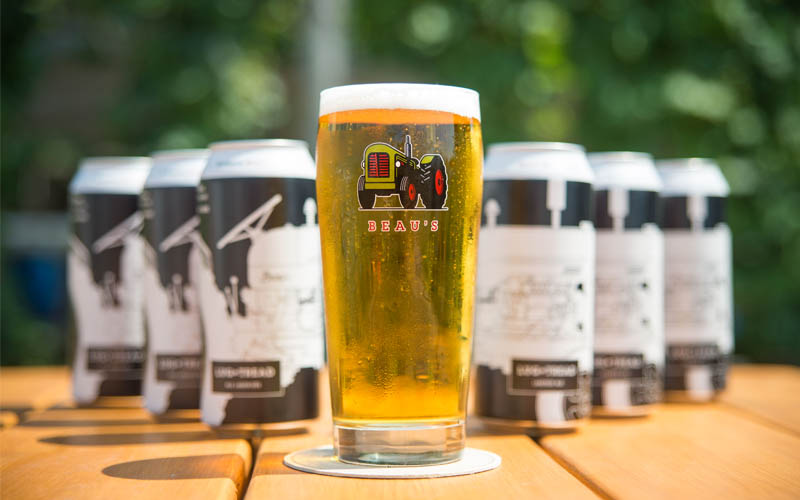 Hometown start: Money was tight from the start, with only $150,000 from investors, the small-town founders nevertheless went in “with the mindset that we’re going to find a way to make it work,” Mr. Beauchesne said.

Local first: The company expanded locally at first, concentrating on nearby Ottawa for a few years before entering the Toronto market.

Expansion next: The brewery then expanded into Quebec. “We’ve gone out of our way over the years to be part of the Ottawa and Montreal communities,” Mr. Beauchesne said. “Within Ottawa, we support so many different charities and so many different community building groups in that city.”

Invest in tech: Expansion has meant a heavy reinvestment back in the brewery’s operations, in order to keep pace with the fast growth. “For right now, all of the dollars that have gone into the brewery have been for two things: quality and capacity,” he said. This has required upgrading production, but buying only the technology that’s most needed. Full automation may come one day, but not now. “We’re still very much people turning nobs,” Mr. Beauchesne said.

Employee shareholders: With this reliance on workers, its family atmosphere and continual need for funds, the company instituted a stock-purchase program for employees, to make them part owners of the business too.

“When we opened in Vankleek Hill [population 2,000], a lot of people kept saying, ‘You guys chose the dumbest place on the earth to open a brewery,’ ” Mr. Beauchesne said. But the brewery was able to take advantage of being ideally halfway between Montreal and Ottawa, and not far from Toronto. The company now ships its beer throughout Canada.

“A brewer has to decide what they want to be, and they can evolve from that," said Luke Harford, president of the trade association Beer Canada. "But if they try to be more than just a local story, they’ve got to be prepared to sustain a bigger presence than they may be prepared for or are financially capable of.

“I think there are some very, very clever people out there who have figured out how to extend their story into other markets extremely well. … They’ve just got to figure out exactly what they want to be, or else they’ll run themselves out of cash, and they won’t be able to sustain it,” he said.

Which brings the story back to technology.

Because a brewery grows with each new market it enters, being able to meet that added capacity is key – as is maintaining the beer’s quality.

“So, when you’re going through the brewery, you will see some absolutely outstanding pieces of technology,” Mr. Beauchesne said, in a tone more like a beer-drinking fan rather than a salesman. “Our bottling filler is absolutely top of the line, and we’ve got, in our QA [quality assurance] department, equipment that can analyze beer down to the DNA level, so we can get rapid results in three hours, to find out if there’s any potential for beer spoilage in there.”

(Oxygen is the big spoiler when it comes to beer and can reduce its freshness and shelf life. Much of the effort with the highest-end equipment is about minimizing the beer’s absorption of oxygen.)

This investment back into certain, key equipment has meant forgetting about fuller automation for now and relying instead on employees. It has been part of the company’s work culture. The Beauchesnes have tried to maintain a sense of family at Beau’s, but there was a snag. “We want you to feel like you’re part of the family. But there was one significant difference. Some people with the last name Beauchesne got to own shares [in the company], and the other people that we wanted to feel like family didn’t,” Mr. Beauchesne said.

So, the brewery started a share ownership plan to sell a portion of Beau’s to its approximately 150 full-time employees, making them co-owners of the brewery. This was also a way to pay back some of the original investors, necessary because the company has been reinvesting all of its profits largely in key technology, so the sale to employees allowed Beau’s to pay investors back.

“It’s interesting. It feels like every couple of years we have another pivot point. It’s been a whirlwind of growth since we started. Sometimes I feel like every six months we have to reinvent ourselves,” Mr. Beauchesne said.

There’s an understated, do-it-yourself ethic in how he describes this, a punk ethic that’s stuck around. In his current band, Audio Visceral, he plays guitar.