A group led by Hudson’s Bay Co. executive chairman Richard Baker raised its takeover offer for the department-store chain by $100-million on Monday and won approval for the bid from members of the company’s board of directors.

Now, the 53-year-old real estate executive and his backers need to persuade the majority of HBC’s remaining shareholders to take their cash, rather than continuing to own a stake in a 350-year-old retailer. HBC runs more than 300 stores under the Saks Fifth Avenue, Hudson’s Bay and Saks Off 5th banners.

Mr. Baker, a group of private-equity funds and an arm of WeWork Companies Inc. boosted their offer for the 43 per cent of HBC they do not own to $10.30 a share, up from an opening bid of $9.45 a share in June. A five-member special committee of independent HBC directors dismissed the original overture as “inadequate” in August, but endorsed the new price, which values the outstanding shares in HBC at $1.1-billion. The offer values the company at $2.6-billion in total.

“We are pleased to have reached an agreement with respect to a transaction that provides immediate and fair value to the minority shareholders," said David Leith, chair of the HBC special committee and a former investment banker, in a news release. Mr. Leith said: "The special committee is confident that this transaction represents the best path forward for HBC and the minority shareholders.”

The new buyout offer comes at a 62-per-cent premium to the price of HBC stock prior to the consortium’s opening bid last June. HBC shares last traded on Friday at $9.45 and the stock price jumped 6 per cent on Monday to close at $10.03 on the Toronto Stock Exchange. The bid is structured as a purchase by the company of HBC shares for cancellation, and this approach could have negative tax consequences for some HBC shareholders, including high-net-worth individuals and hedge funds, compared with a typical takeover offer.

Mr. Baker’s buyout needs to be approved by a majority of HBC’s minority shareholders, and also needs the support of 75 per cent of shareholders who vote at a planned special meeting on the offer that the company said will take place in December. Minority shareholders include Land & Buildings Investment Management LLC and Catalyst Capital Group Inc., which also dismissed the opening offer from Mr. Baker’s group as inadequate. Catalyst and Lands & Buildings declined to comment on Monday on the new offer.

Private-equity fund Sandpiper Group also holds a stake in HBC – the Vancouver-based company declined to disclose the size of the position – and CEO Samir Manji said in an interview: “We don’t view this offer as acceptable.” Mr. Manji said his company’s analysis shows the bid undervalues HBC’s properties. Mr. Manji said at a time when real estate markets are soaring, "all of a sudden they got an appraisal that reduces the value of Saks Fifth Avenue by more than 50 per cent.”

Mr. Baker and his consortium are framing the decision facing minority shareholders as a choice between the certainty of cash versus the risk of continuing to own aging stores facing steadily rising competition from digital platforms such as Amazon.com Inc. HBC’s most recent financial results showed that the company lost $709-million in the past six months, on sales of $3.7-billion. HBC said the $10.30 offer “provides certainty when compared to other alternatives in the current challenging retail and deteriorating retail real estate environment.”

Mr. Baker’s group increased its offer in the wake of a valuation commissioned by the special committee and conducted by TD Securities Inc. that stated HBC stock is worth between $10 and $12.25 a share. The special committee also hired two real estate appraisal companies and they pegged the price of HBC’s 79 properties, many of which are in downtown locations, at $8.75 a share. That is well below the $20-plus-per-share value on HBC real estate put forward in recent years by shareholders such as Land & Buildings. HBC disclosed on Monday that its properties are worth $6-billion and carry $3.5-billion of debt.

After reviewing HBC’s properties, the special committee said: “Redeveloping the company’s real estate would not result in creating additional value for shareholders in the foreseeable future, compared to the certain value provided by the transaction.”

HBC closed the sale of its European real estate and retail joint ventures to its partner, SIGNA Retail, in early October for $1.5-billion. That money will fund a significant portion of the bid to take the company private. The group will also borrow from Bank of America and Royal Bank of Canada. Besides Mr. Baker, the buyout consortium is made up of Rhone Capital LLC, WeWork Property Advisors, Hanover Investments (Luxembourg) SA and Abrams Capital Management LP, and they currently own 57 per cent of HBC.

Mr. Baker owns privately held National Realty & Development Corp., a U.S. company founded by his father. The Cornell graduate took the reins at HBC in 2008. In 2011, Mr. Baker authored a landmark deal in Canadian real estate by selling the leases on 220 Zellers stores to U.S. retailer Target for $1.8-billion. Target quit Canada within three years of moving into the country after losing more than $2-billion.

In millions of Canadian dollars, except per share data

Catalyst has boosted HBC stake to 16 per cent as it battles take-private bid
September 10, 2019 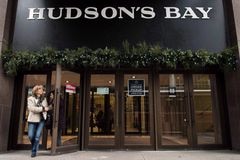