Mark Machin, the chief executive officer of Canada Pension Plan’s investment branch, stepped down after receiving a COVID-19 vaccination in the United Arab Emirates – a move that blindsided the federal finance minister.

Late Thursday, it was revealed that Mr. Machin travelled to Dubai with his partner and received a vaccine shot while there. He had resigned by Friday morning, and the CPPIB board of directors named internal executive John Graham as its new CEO, effective immediately.

Mr. Machin has said he was in Dubai for a number of reasons, some of which were “deeply personal.” Neither he nor CPPIB have elaborated on the purpose of his trip. CPPIB has also not confirmed if Mr. Machin’s travel was approved by the board of directors.

Canada Pension Plan Investment Board is the country’s largest pension fund, managing $476-billion on behalf of Canadians. CPPIB is a federal Crown corporation that operates independently of the federal government, but the finance minister is responsible for appointing its directors, after consulting with the provinces.

“While the CPPIB is an independent organization, we are very disappointed by this troubling situation and we support the swift action taken by the board of directors,” Katherine Cuplinskas, Finance Minister Chrystia Freeland’s press secretary, said in a statement Friday.

“[Ms. Freeland] spoke to the chair of the board of directors today and made clear that Canadians place their trust in the CPPIB and expect it to be held to a higher standard,” she added. Ottawa was not aware of the foreign trip.

It is not illegal for Canadian residents to travel abroad, but the federal government has issued a global advisory to avoid all non-essential travel outside Canada.

On Friday, The Globe and Mail surveyed 18 large, federally regulated companies and Crown corporations, ranging from airlines to banks to telcos, to ask if any executives had been vaccinated abroad. Sixteen of these organizations said none of their executives had. Canadian National Railway declined to comment on privacy grounds, and Canadian Pacific Railway Ltd. did not reply.

The Globe also contacted a number of large pension funds, and five replied, saying none of their executives have been vaccinated abroad. This includes the Caisse de dépôt et placement du Québec, which is Canada’s second-biggest pension fund with $365.5-billion in assets under management.

Mr. Machin’s resignation adds fuel to the debate over who should be punished for going against travel advisories. Some consider it overkill, yet stakeholders are increasingly holding boards of directors and executives to higher environmental, social and governance (ESG) standards.

“The manner in which the CPPIB managed the CEO’s actions illustrates how important trust is in every organization, particularly when the business of the organization involves managing the public’s money,” Peter Dey, a Bay Street veteran who has long called for better governance, wrote in an e-mail. “Not every corporation is as dependent upon the public as the CPPIB, but every corporation has a community responsibility to act like a responsible citizen and jumping the vaccine queue is below the line.”

In a statement Friday, CPPIB’s board said leadership is “fundamental to meeting our objectives on behalf of Canadians and we take that responsibility of leadership very seriously.”

CPPIB’s board unanimously voted for Mr. Graham to be the next CEO. He joined the fund in 2008 when it was just beginning to build out its active investment management strategy, moving to CPPIB from Xerox Innovation Group.

In an internal memo to all staff on Friday, board chair Heather Munroe-Blum wrote that the board determined the existing internal slate of CEO candidates “would best serve the organization,” and added that the board did not consider external candidates.

CPPIB declined to comment beyond its formal statement Friday. Board chair Heather Munroe-Blum did not reply when asked if the board had approved Mr. Machin’s trip.

In an internal memo to staff, reviewed by the Globe, Mr. Machin said his trip was supposed to be “very private” and that he was disappointed it has become the focus of “expected criticism.”

The former CEO made his trip while the majority of Canadians wait for their own vaccinations, with some provinces just beginning to roll out plans to inoculate people in the general population who are 80 years or older. Mr. Machin was born in 1966.

By contrast, Caisse spokesman Maxime Chagnon wrote in an e-mail that all of the fund’s executives “will rigorously follow directions provided by local health authorities for the COVID-19 vaccination campaigns where they are based.” 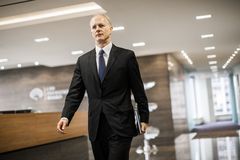 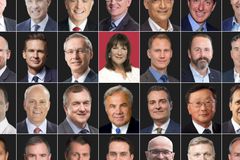 Follow Tim Kiladze and Bill Curry on Twitter @timkiladze @curryb
Report an error Editorial code of conduct
Due to technical reasons, we have temporarily removed commenting from our articles. We hope to have this fixed soon. Thank you for your patience. If you are looking to give feedback on our new site, please send it along to feedback@globeandmail.com. If you want to write a letter to the editor, please forward to letters@globeandmail.com.
Comments