Home Capital Group Inc. continued to rebuild its mortgage business in the first quarter of 2018, issuing nearly $1.2-billion in new home loans − a 33-per-cent increase from the prior quarter.

A year after the alternative mortgage lender suffered a crisis of confidence and a run on its deposits, Home Capital improved its profit and the volume of new residential home loans it issued continued to rebound as the company’s funding sources recovered.

Chief executive officer Yousry Bissada, who was hired last summer to steer the company’s turnaround, claimed that “Home is back, in every aspect of our business,“ speaking to analysts on Wednesday. The Toronto-based company’s share price was up more than 5 per cent in mid-afternoon trading.

Yet Home Capital’s financial results are still a far cry from precrisis levels. And Jaeme Gloyn, an analyst at National Bank Financial Inc., cautioned in a research note that the lender has encountered “speed bumps” on the road to recovery, while “significant headwinds remain.”

Company executives said it’s still too early to gauge the impact of new stress tests on uninsured mortgages mandated by Canada’s banking regulator in January. So far, the lender has seen higher renewal rates among its customers as some borrowers find they are unable to qualify for mortgages from other financial institutions. At renewal, only borrowers switching mortgage providers are required to pass the stress test.

“None of us know yet if this is the new normal,” Mr. Bissada said.

Costs came in lower than expected, but salaries and benefits are expected to rise by $5-million to $6-million over the balance of the year. Home Capital has begun rehiring to fill certain vacant jobs after it cut about 10 per cent of its work force last fall, but the company will still be noticeably smaller.

And there is pressure on the lender’s net interest margin (NIM) − which measures the difference between what it earns on loans and pays on deposits − due to competition amid rising interest rates. Home Capital’s NIM was 2.02 per cent, down sharply from 2.44 per cent a year ago.

First-quarter profit was $34.6-million or 43 cents a share, down 40 per cent from $58-million or 90 cents a year ago, prior to the funding crisis. But profit rose 13 per cent compared with the fourth quarter of 2017, beating analysts’ expectations.

Provisions for credit losses − or the sum Home Capital sets aside to cover bad loans − were $6-million or 0.2 per cent of gross uninsured loans. Because the company adopted a new accounting standard known as IFRS 9 in the first quarter, expected loan losses can’t be compared with those from the prior year, but the company expects new accounting rules will make provisions more volatile.

Looking ahead, Home Capital is in talks to replace a $2-billion standby credit line extended last year by its largest shareholder, Berkshire Hathaway Inc. − the investment firm run by renowned investor Warren Buffett. The credit facility expires in late June, and Home Capital expects to substitute a much smaller line of credit, possibly from a different source.

And chief financial officer Brad Kotush said the lender is looking to diversify its funding sources beyond guaranteed investment certificates, or GICs, which make up the bulk of its deposit base. The company is considering a short-term revolving credit facility – known as a “warehouse line of credit” – for insured mortgages, and will explore the possibility of issuing residential mortgage-backed securities, which remains a nascent market in Canada.

Home Capital reports 40 per cent drop in first-quarter income
May 8, 2018 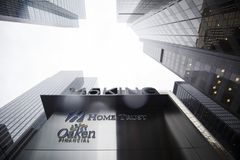