Home sales in Toronto, Vancouver and Calgary rebounded in May, after collapsing in April as the novel coronavirus pandemic took hold.

Activity in May was still well below levels over most of the past year, however, and economic turmoil will likely hamper any broader housing recovery, experts said.

“There looks to be a fledgling recovery from the extreme conditions in April, but it’s early days and we have a long road to climb,” said Douglas Porter, chief economist with Bank of Montreal. “It’s very challenging to project what’s ahead for the housing market with such an uncertain backdrop for the broader economy and how policy makers will respond to it in coming months.”

In the Toronto region, the largest residential market in the country, 4,606 homes sold in May, up 53 per cent on a seasonally adjusted basis from the previous month. But that was 54 per cent lower than the same month last year, with condo sales leading the way down.

In the Vancouver area, 1,485 homes sold last month, a 34-per-cent increase from April, but a 44-per-cent drop compared with May of last year and well below the 10-year average.

In Calgary, which has also been hit by the sharp drop in oil prices, sales nearly doubled from April to 1,080, but were 44 per cent lower than May, 2019, with condos recording the steepest decline.

The Toronto Regional Real Estate Board said it is “very possible that home sales will continue to improve," if the economy continues to reopen. But economists warned against reading too much into the one-month rebound.

“Don’t be fooled by May’s large percentage gains," said Robert Hogue, senior economist with Royal Bank of Canada. "They will reverse only part of the huge declines in March and April. Activity in both markets is still running well below normal.”

Before the pandemic shuttered large swaths of the country, housing markets were overheating in Toronto, Vancouver, Montreal, Ottawa and most of Southern Ontario. Although sales dropped to near-record lows in April, prices remained relatively flat in May, with homeowners choosing to either suspend or avoid listing their properties.

In the Toronto area, the overall average real estate price was steady month to month. But the home price composite index, which is an industry calculation that adjusts for shifts in types of homes sold, rose 9.4 per cent to $870,000, according to the local board.

Home prices in the Vancouver region, the priciest market in the country, also remained high. The home price composite index across all types of residential properties was $1,028,400 last month, flat compared with April and up 2.9 per cent from May of last year. Every type of property – including detached houses, townhouses and condos – recorded a small price increase, according to the Real Estate Board of Greater Vancouver.

With the number of coronavirus cases dwindling in B.C., the province started reopening businesses and buyers felt more comfortable resuming their home searches, according to mortgage brokers and realtors.

The real estate board said if home buyers and sellers can see that prices have not cratered, it gives them confidence to enter the market. Buyers are saying “prices are not running away from me,” and sellers are saying “yes, there are buyers in the market. Let’s do what we can to facilitate a sale,” said Colette Gerber, board’s chair.

Meanwhile, in Calgary, the benchmark price last month was $411,600, off slightly from April and down about 2 per cent from May, 2019. Major losses of highly paid energy and tech sector jobs, along with a surplus of real estate, is expected to push prices down further.

In the Toronto and Vancouver regions, new listings continued to move in lockstep with sales – increasing from April to May, but falling compared with the same month last year.

The Canada Mortgage and Housing Corp. has forecast that national home prices will decline as much as 18 per cent from peak to trough. It expects prices to hit bottom in the second quarter of next year. That will occur after mortgage deferrals arranged during the pandemic are due to expire.

Banks have granted deferrals of up to six months for about 15 per cent of their mortgage holders. If those homeowners are unable to restart mortgage payments, they may be forced to sell their homes quickly and that could also depress prices. 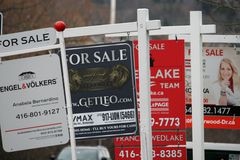 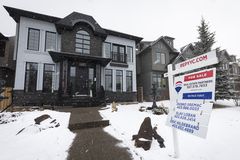 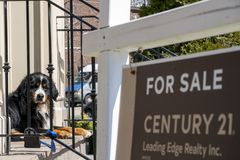