Hootsuite Inc. is overhauling its entire executive team, one month after announcing company founder Ryan Holmes would vacate his role as CEO to become executive chairman.

Mr. Holmes, who is set to become executive chairman once his replacement is hired, said in a statement to The Globe and Mail that after “a milestone year ... I engaged with the executive team in candid conversations about the right strategy and organization to lead the company into its bright future. In doing so, we mutually agreed, it was time to pass the torch on to the next phase of leadership." He thanked the trio for their “immeasurable contributions" to Hootsuite.

This is only the latest in a wave of changes in the company’s executive ranks.

“The company is going to be worse off for their departures,” said Ajai Seghal, Hootsuite’s chief technology officer from 2014 to 2017. “They’re good leaders.”

Most of the replacement roles, including Mr. Handford’s yet-to-be-hired successor, are one rank down the organization chart from their predecessors. “We believe these changes will allow us to improve reporting lines, increase agility and drive innovation,” Mr. Holmes told staff in a memo.

The departure of the three top executives who reported to Mr. Holmes ends a tumultuous year for one of Canada’s largest private software companies. Hootsuite abandoned an auction process just before Christmas, 2018, after preliminary offers came in below expectations. That coincided with departures of sales, product and technology executives, The Globe reported in January. In April, the company laid off about 10 per cent of employees, or 100 people, as it sought to improve efficiencies. During the summer, board advisers John Ruffolo and Paul McFeeters formally left their roles, as well as corporate secretary and senior vice-president of legal Paula Pepin.

The Globe reported last month that Mr. Holmes’s departure followed months of tense board discussions about whether he was still the right person to lead the company after prospective buyers raised concerns about some of Hootsuite’s performance metrics, and customer and employee churn. “Hootsuite is Ryan Holmes; it was his vision from day one,” Mr. Seghal said. “Any founder-CEO has to recognize the time when the company gets to a size where he’s better off taking that step aside and bringing in a professional CEO. ... How effective he is as executive chairman will be determined by how much leeway he gives the incoming CEO and leadership team."

In his resignation note to shareholders last month, Mr. Holmes highlighted the fact the company had surpassed US$200-million in annual recurring revenue, reached profitability and that changes to sales and marketing teams had prompted a 20 per cent increase in contract values and improved retention rates.

In an interview, Mr. Twinney – who has played a pivotal role in driving the company’s improved performance in his two-plus years with the company – said he remained a shareholder and on good terms with Mr. Holmes. "This isn’t me storming out the door [but] deciding in a thoughtful, mutually agreed upon way” to leave while ensuring a successful transition.

“The business is in a healthy state ... growing profitably," he said. "There are very few companies that are doing that at our size, scale and international footprint.”

One insider said Mr. Twinney’s departure in particular had shaken staff as he was seen as a key “change agent” internally. “I think we’ll see some profound instability for awhile until a professional CEO is hired,” the source said.

The Globe is keeping the source confidential because they were not authorized to speak to the media.

Hootsuite was born 11 years ago from Mr. Holmes’s internet services and marketing consultancy, Invoke Media. With the rise of social media, Hootsuite became a Canadian tech darling, helping corporations manage and navigate the new communication channels with their customers. Despite raising US$250-million in venture capital, the company struggled to reach and maintain profitability, missing several sales targets, while a stream of seasoned executives recruited from outside cycled through the business. 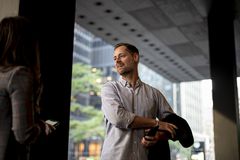 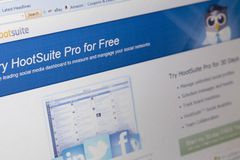