Horizons ETFs Management Inc. is warning investors not to buy units of two of its popular oil-focused exchange-traded funds, as the ETFs face possible implosion because of collapsing energy prices.

The company’s two short-term oil funds, Crude Oil 2x Daily Bull (HOU) and Crude Oil -2x Daily Bear (HOD), may be forced to liquidate their assets if prices go much lower, Horizons said in a statement on Monday. That could lead to significant losses for investors, as the market value of the oil contracts underlying the funds are likely worth less than the value of the funds themselves. Prices have become disjointed after the funds stopped issuing new units last week amid wild oil price swings.

“It is imperative to note that units of HOU and HOD have and are expected to continue to trade at a substantial premium to their net asset value while subscriptions of new shares are suspended," Horizons said. “The manager continues to strongly discourage investors from purchasing shares of HOU and HOD at this time.”

Oil continued to punish speculators looking for the bottom of the market on Monday. Brent crude fell below US$20 a barrel and West Texas Intermediate plunged 25 per cent to settle at US$12.78, as producers, traders and investors grapple with a drop in demand and a lack of storage space for new crude still being produced.

Horizons warned Monday that if WTI falls below US$10, there’s a good chance that its funds will be forced to cash out of the oil market altogether, likely causing significant pain to investors.

Over the past few weeks, retail investors in oil ETFs, such as HOU or United States Oil Fund LP (USO), have been particularly hard hit by volatile prices. The funds are exposed to short-term futures contracts, based on barrels of WTI oil that are scheduled to be delivered in two or three months. These contracts, at what’s called the front end of the futures curve, have seen the steepest price drops.

HOU, which typically uses leverage to magnify returns, both positive and negative, plunged 75 per cent last week and a further 24 per cent on Monday.

USO, the largest oil ETF in the world, fell 15 per cent on Monday, after a 39-per-cent drop last week. USO said Monday it was selling all its holdings in the June WTI contract, shifting into contracts for later dates.

The involvement of these large funds in the oil futures market may even be exacerbating price swings. Traders told Reuters that the June crude contract is down in part because ETFs such as USO are shifting their investments away from front month June contracts to avoid getting trapped as many did a week ago, when the oil contract dropped to minus US$37.63 a barrel.

Horizons’ funds face additional risks that could effectively shut them down. Neither fund directly owns WTI futures contracts, but instead uses derivatives to get exposure to futures contracts. If there is a sharp change in oil prices, the counterparties in these derivative arrangements have the right to force Horizons to settle.

“Although the counterparties to HOU and HOD have not exercised these termination rights at this time, it is the [fund] manager’s view that, if the current July, 2020, or August, 2020, crude oil future contracts were to settle on any day below US$10, then the risk of termination of the forward agreements by the counterparties would increase substantially,” Horizons said.

Should this happen, HOU and HOD unitholders may find out their investments are worth even less than they suspect. Horizons was forced to stop issuing new units last Tuesday, meaning that the ETF unit price no longer tracks the value of the underlying assets, as would typically happen with ETFs.

At one point last Tuesday, for example, units of HOU were trading at a 650-per-cent premium to the fund’s intraday net asset value (essentially the market value of the futures contracts underlying the fund) as speculators flooded into the fund. 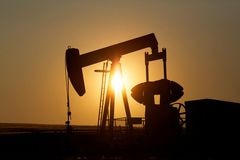