Widespread layoffs of low-paid workers in the early months of the COVID-19 pandemic led to a sharp rise in average weekly wages, a statistical quirk that has morphed into an added tax burden next year for employees and employers.

Not this year. The large increases in unemployment hit low-paid workers disproportionately hard, with Statistics Canada noting the “particularly severe” impact on those making less than two-thirds of the median wage of $24.04 an hour. That meant the average wage in Canada rose, because the calculation no longer included large numbers of those lower-paid workers. The industrial aggregate wage, the agency’s measure of pay across all sectors of the economy that the CPP uses to determine maximum contributions, rose sharply in April and May and retained most of those gains in June, as the chart below shows.

In most years, that cut-off point doesn’t matter, since wage rates aren’t that volatile, in part because they are adjusted for predictable seasonal variations. The chief actuary precisely predicted in December, 2018, what the yearly maximum pensionable earnings would be in 2020: $58,700. For 2021, the chief actuary predicted that maximum would increase to $60,200.

But the increase in average wages driven by pandemic-triggered layoffs pushed beyond the scope of any adjustments for seasonality and past the actuary’s forecast. Earlier this month, the Canada Revenue Agency said maximum pensionable earnings would rise to $61,600 for 2021. Along with a legislated increase in CPP contribution rates, the maximum contributions for employees and their employer will rise to $3,166.45 in 2021 from $2,898 this year, an increase of $268. That increase of 9.3 per cent is the biggest since the early 2000s, when the federal government was still increasing contributions rapidly to close a funding gap that threatened the long-term viability of the plan.

If the actuary’s forecast of $60,200 had been correct, the maximum contribution would have risen only to $3,090.15, an increase of $192. Coincidentally, if the three months of surging average wages in April, May and June are excluded from the calculation, the resulting CPP maximum is $60,200 – just as the chief actuary forecast nearly two years ago.

The resulting extra $76 may not sound like much of an additional cost burden. Employees also have to make at least $60,200 for the higher ceiling to result in increased CPP contributions for them and their employers.

But the Canadian Federation of Independent Business says the increased payroll tax can quickly add up for employers and comes at a time when many companies are already struggling to stay afloat. Ted Mallett, CFIB vice-president and chief economist, said those cost pressures are exacerbated by the federal government’s “bulldozer solution” of increasing contribution rates through to 2023 to finance enhanced benefits in coming decades.

The CFIB had already called for a freeze in CPP contributions and points to the anomalous jump in average wages to bolster the case it is making to Deputy Prime Minister and Finance Minister Chrystia Freeland. However, any move by the federal government to change the structure or financing of the CPP would need the agreement of two-thirds of provinces representing two-thirds of Canada’s population as part of a triennial review of the plan that needs to be completed before the end of 2021. Still, Ottawa could conceivably introduce a tax credit that had the effect of freezing premiums.

In a statement, Katherine Cuplinskas, a spokeswoman for Ms. Freeland, said freezing increases in yearly maximum pensionable earnings would reduce future retirement benefits for current workers, because the CPP is financed by employer and employee contributions. (Returns on investments by the Canada Pension Plan Investment Board are added to those contributions.)

Mr. Mallett says he expects it will take at least another year for labour markets to recover enough for the distortion in average wages to disappear. But employees and employers shouldn’t expect a break in contributions if the 12-month average in the industrial aggregate wage dips come next June. Under the CPP’s rules, the contribution ceiling only stays flat or goes up – it never goes down.

Vanishing act: Why there were fewer insolvencies even as number of businesses decreased
Subscriber content
November 13, 2020 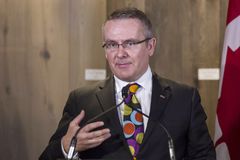 Ontario steps on to a slippery debt path with budget
Subscriber content
November 6, 2020 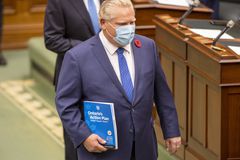