On Himanshu Dev’s first day of class at Western University’s Ivey School of Business, a professor insisted he either shorten or change his name so his classmates would have an easier time remembering and pronouncing it.

Mr. Dev served in the Canadian Armed Forces for four years, including in Afghanistan. He said the culture of the business school was notably more racist than his experience in the military.

His feeling of being an outsider didn’t end on the first day of school. Mr. Dev, who graduated in 2015, was often present when his fellow students mocked the accent of their finance professor. “He was a really strong professor, a Harvard grad who was really knowledgeable, but students used to imitate him in the most horrible Indian accent in front of me,” he later wrote. “I should have said something, especially coming from the military with our honour code… but I just wanted my degree and to get out of there.”

The recent graduate retold his experience on @iveyatthemargins, one of the numerous Instagram accounts created in recent months to enable students and alumni at some of Canada’s top business schools to share their experiences with discrimination, ranging from experiencing microaggressions to being subjected to racial slurs.

A Ivey spokesperson said school administrators are aware of the account where Mr. Dev posted and are “listening closely” while developing an action plan in consultation with the community.

Combined, the Canadian business school accounts have received thousands of testimonials, coming from sources ranging from current students to alumni who graduated as far back as 2001. Many of the allegations concern the conduct of fellow students, along with faculty and administrators.

Observers say the complaints reflect the realities of business education, which often emulates now out-of-date dynamics once common in the corporate world.

The institutions have yet to shed traditional notions that “conflate or confuse whiteness and masculinity with success in the business world,” according to Jennifer Berdahl, a professor at UBC who has spent over 20 years teaching at business schools including the University of California-Berkeley and the University of Toronto.

Given the competitive nature of business schools, “students will try to achieve a precarious form of superiority by conforming to that traditional model, and create close-knit, exclusive circles, that discriminate against those who diverge from that norm,” Dr. Berdahl added.

❗️❗️❗️❗️❗️ This is an urgent message: We are working actively to address the submissions made. Thank you for your courage and support. Let’s keep the momentum going. ❤️

Sara Reza, a third-year undergraduate at York founded @silencedatschulich after arguing on her personal Instagram that business education avoided discussion of race, privilege and inequality. She says her inbox was "flooded with students expressing microagressions and racist incidences they faced at Schulich. That’s when I realized it was a much bigger problem than I thought. "

Ms. Reza posted a jarring testimonial by a former Schulich undergraduate student named Reni (who does not want to use her last name). In the post, Reni described an incident in 2016 in which a professor, who had previously made comments about another student’s turban, used a racial slur for Black people repeatedly in class. The class fell silent and everyone looked at Reni, the only Black student in the room. The professor allegedly told the class to not be so sensitive, stating that she could make these types of comments as a Jewish woman.

Reni says she and multiple other classmates e-mailed the school about the incident, but did not receive any replies. After the death of George Floyd, Reni felt frustrated by social-media posts from the school condemning racism in business, and noticed the subject of her complaint was still listed as a faculty member. She tweeted a response to one administrator’s post, asking why the school hadn’t followed up when she reported the professor. Only after multiple people flagged the tweet for administrators and Schulich’s social-media accounts did Reni receive a reply to her e-mails from the school. She was told the professor was let go for “other reasons” in 2018 but her profile had not been removed from the website.

Detlev Zwick, Schulich’s interim dean, said through a spokesperson that the school is aware of the account and encourages the use of online platforms to bring issues of racism and inclusivity to the forefront. “Schulich does not tolerate or excuse discrimination and racism of any kind. As one of the most diverse business schools in North America, Schulich has a long tradition of actively encouraging and supporting inclusivity and diversity,” he said in a statement. He declined to comment on the specifics of the incident reported by Reni, but noted that any complaints brought to the Schulich student services unit or to the attention of the administration are investigated.

In another testimonial posted on @silencedatschulich, Ayomide Olatoye, a Black woman who is entering her fourth year at Schulich, wrote: "When I had told (another) student that I had gotten an internship at a well known and sought out firm and the first question he dared to ask me was ‘I’m not trying to be rude, but do you think it was because of affirmative action?’” Ms. Olatoye told the Globe that she believes a culture of anti-Black racism exists at business schools in Canada. “When I got accepted into Schulich, I was already expecting to be treated as inferior and discriminated against,” she said. “It’s not just Schulich, many prestigious business institutions don’t know how to treat people of colour, especially Black people, particularly in the things they say.”

In his statement, Mr. Zwick noted that the school began consultations in late June to form a “diversity, equity, and inclusion working group.” The School has committed to hiring more Black faculty, is reviewing current equity trainings, and collaborating with “with other leading business schools in Ontario regarding several joint initiatives to tackle barriers for Black and Indigenous students.”

The pressure on students to conform and not speak out against discriminatory behaviour, whether by faculty or fellow students, is high.

One of the founders of the account @sauderunspoken, the account that shares testimonials for the Sauder School of Business at UBC, told the Globe that professors frequently emphasize to students “your network is your net worth.”

This is part of the reason that the majority of the testimonials on these accounts are submitted anonymously. (The founders of two of the accounts, @stolenbysmith and @silencedatschulich, have publicly identified themselves; the individuals behind @iveyatthemargins and @sauderunspoken have chosen to remain anonymous.)

Kelly Weiling Zou, the founder of @stolenbysmith and a fourth-year commerce student, said “students are afraid to share their names when talking about the abuse they have endured, because in commerce recruitment, connections and reputation mean the difference between landing a job at a good firm or being unemployed after graduation.”

All individuals involved in these accounts credit @Blackatharvardlaw, which first posted in mid-June and was founded by a Black Harvard Law student to expose racism at the school, as an inspiration.

In conversations with the Globe, the account founders all emphasized that their activism was inspired by the work already done by the Black Lives Matter movement.

But anonymity isn’t always possible. The lack of Black students at these schools means individuals posting anonymously about experiences with racism on Instagram can still be easily identified, according to Sakariya Ahmed and Teddy Kassa, members of The Black Student at Ivey Collective. They described incidents where the n-word was used casually, “there were so many instances where the n-word was used around me, with white students debating whether or not it is appropriate to sing along to lyrics that use the word.” Mr. Kassa said.

After a professor failed to intervene after a joke was made in class about Black people not being able to afford housing, Sakariya Ahmed and six other Black students decided to form the collective last year, which includes all the Black students at Ivey. As a group, they approached the new Dean of Ivey, Sharon Hodgson. They said the Dean has been highly receptive to their input.

In July, Ms. Hodgson told the Globe: “While we have taken some actions in recent years, the course and speed needs to change if we are to make meaningful progress.”

She elaborated in a letter published on the Ivey website in August. " Hearing from you and listening to your stories, it has become clear to me we haven’t done enough to address discrimination, sexism, racism, and inequality on campus and at Ivey. I want to personally apologize for the hurt this has caused," she wrote.

Students at other business schools feel their institutions are less receptive, however. Ms. Weiling Zou and fellow Smith students Noor Rahemtulla and Meena Waseem were disappointed by an online town hall on diversity and inclusion hosted in July by Dean Brenda Brouwer and Lori Garnier, the executive director of the undergraduate commerce program. They say the fact that the administrators only accepted 40 minutes of questions, which were selected by a moderator, felt inadequate to the urgency of their desire for transparency and change.

Ms. Weiling Zou, along with Ms. Rahemtulla and Ms. Waseem, have also conducted one-on-one conversations with Ms. Brouwer and Ms. Garnier. In the meetings, the students proposed a number of recommendations, including reforms to the financial aid system, including a system that prioritizes non-merit based scholarships for BIPOC (Black, Indigenous, and people of colour) and students with disabilities, similar to the needs-based funding system that Harvard Law School utilizes, and the introduction of measurable diversity targets that can be tracked with each year.

Through a spokesperson, Ms. Brouwer told the Globe she agrees financial assistance is vital to increasing diversity but she has not yet committed to reforming the School’s aid system to a needs-based rather than a mixed system that incorporates merit-based aid and awards. She noted that “within Smith, there are student awards designated for indigenous and BIPOC students, and students from equity-seeking groups. We want and plan to continue to grow the funds and awards available to students.”

The school will also be improving their diversity data collection, and developing key performance indicators to track progress in diversity. They have also mandated additional required trainings for staff and faculty on anti-racism, and hired students to work part-time to implement diversity initiatives.

Faculty and staff have been encouraged to read through the posts on @stolenbysmith, which now has upwards of 12,500 followers. Prior to the creation of the accounts, Ms. Brouwer said, the school had hired an Indigenous recruitment specialist, in conjunction with the university’s law school, and a dedicated diversity and inclusion coordinator for the undergraduate program.

Ms. Waseem thinks the Instagram accounts have raised awareness amongst students about discrimination at business schools, but she worries about how far they can go to actually change things.

“I think a lot of people see these Instagram testimonials as an ‘inciting incident’ - they’re not,” Ms. Waseem said. “For so many BIPOC students, this isn’t the beginning, this isn’t even the climax of the activism we’ve been doing and the change we’ve been demanding for years. At this point, there’s a sense of exhaustion.” 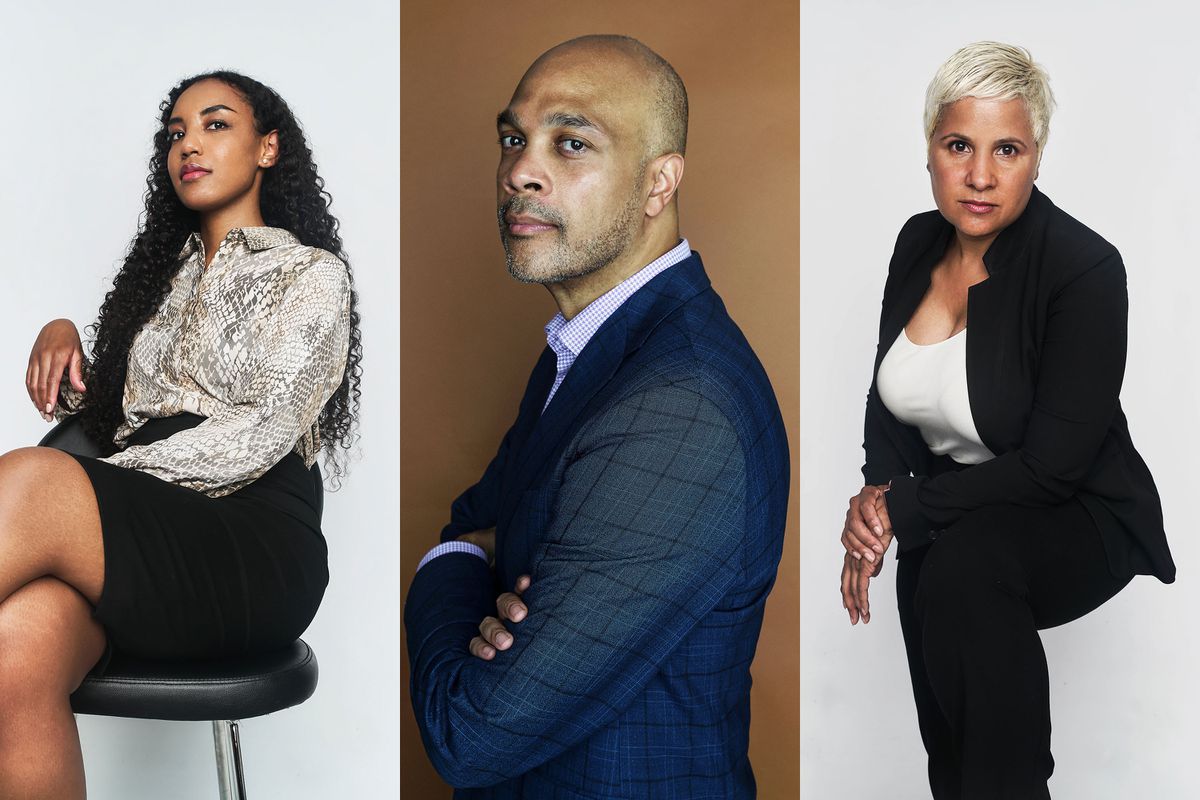 Why are there still so few Black lawyers on Bay Street?

At a critical time when employers are talking about diversity more openly, many racialized people say the insular legal community is as unequal as ever. The Globe’s Christine Dobby investigates.

opinion
Can I be a Black mother in a world so dangerous to Black children?
September 12, 2020
Corporate Canada needs to take an active role in dismantling anti-Black racism
September 15, 2020