The Sky Guys started by taking images and videos for real estate companies, and quickly branched into working for oil and gas companies, utilities, wind farms and movies and television shows.

When Adam Sax founded The Sky Guys Ltd. as a drone company in 2015, he figured the sky was the limit for his business – until he discovered bigger horizons.

“When I started the company three and a half years ago, I wasn’t sure where it was going to go. The only thing I knew was that drones would be here to stay, and that drones were going to be an impactful, disruptive technology,” says Mr. Sax, president and chief executive officer of the Toronto-headquartered firm. 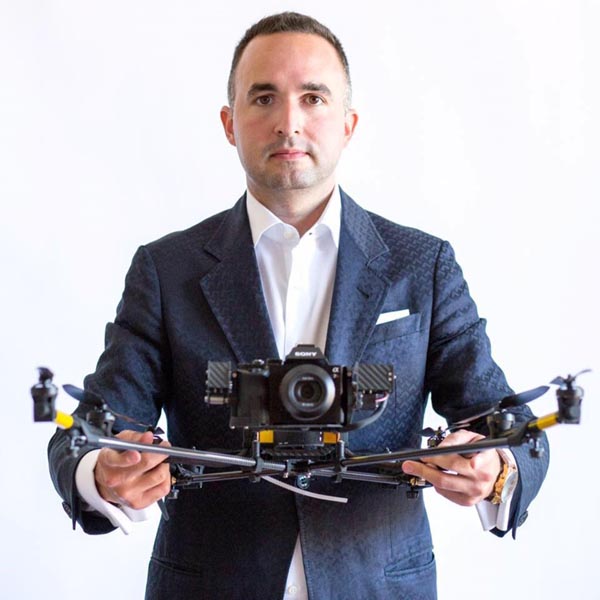 COURTESY OF THE SKY GUYS

“We launched as a drone company that would provide services for anything and everything,” he says. The Sky Guys started by taking images and videos for real estate companies, and quickly branched into working for oil and gas companies, utilities, wind farms and movies and television shows.

“We grew quickly across Canada.” The company got a licence for unrestricted operational services, essentially allowing them to fly anywhere, he says. Transport Canada rules announced in January now restrict where drones can fly, aimed at preventing operators from flying within 5.6 kilometres (three nautical miles) of airports, for example.

The Sky Guys grew and spread to operate unmanned aircraft services all over Canada, yet Mr. Sax says he knew that even in the short life of his company, it was time for a shift.

“As we became a well-known name in the service industry for drones, we began to understand where the industry was headed. A lot of competitors were coming in, mom and pop operators. So our focus started to change,” Mr. Sax explains.

“We started to focus our business less on the actual data collection using drones and more toward looking at how to handle the data that’s collected,” he says. “That’s when we decided to fund and start our own lab and software division.”

Within a year of founding The Sky Guys, Mr. Sax launched Defiant Labs to develop new drones and deploy new thinking into what the devices can do and how they operate.

"We’re an ideas company. We have a huge outlook. Five years from now, we believe that drones will be in use all around the world, every single day in every industry."

From a compilation of aerial video clips recorded by The Sky Guys's drones, for commercial and industrial clients across North America.

VIDEO COURTESY OF THE SKY GUYS

Since pivoting, Defiant Labs and The Sky Guys have offices in Toronto, Vancouver, Houston and Washington D.C., and they do work in Saudi Arabia and the United Arab Emirates, as well as in Central and South America. Though the company’s work is increasingly in research and development, Mr. Sax thinks even R&D is too restrictive a term.

“We’re an ideas company. We have a huge outlook. Five years from now, we believe that drones will be in use all around the world, every single day in every industry,” he says.

The ability for businesses like The Sky Guys to pivot quickly and nimbly is critical in the digital age, when disruptive technologies can quickly supplant ideas that everyone thought were sure-fire bets. Remember Palm Pilots? Flip cameras? It seems like they disappeared in a nanosecond with the arrival of the smartphone.

As Richard Branson, founder of Virgin Group, has noted: “Every success story is a tale of constant adaptation, revision and change. A company that stands still will soon be forgotten.”

Mr. Branson started out in the music business before pivoting to airlines and mobile phones. Shopify started out in 2004 as an online snowboard equipment store; Groupon began as a social media platform for people to rally together to accomplish a goal, not as a bargain hunters’ site.

Pivoting requires constant work even after you take your company in a new direction, Mr. Sax says. “It’s a matter of understanding the market and applying the capital and resources to where it’s going.”

Even when it is successful, it is seldom easy, he adds. “We hit major roadblocks,” Mr. Sax says.

A flight test of an earlier drone design by The Sky Guys.

VIDEO COURTESY OF THE SKY GUYS

For example, Defiant Labs developed innovative data-gathering software for drones, only to find that it wouldn’t necessarily work on drones flying in bad weather.

“So then we made another major pivot, to develop our own drones. We raised more money and pivoted to develop drone hardware as well as software. Now we focus on commercializing these.”

Drone-related businesses are developing so fast and changing so often that some entrepreneurs who enter the field find they have had to pivot even before getting started.

“I was a junior pilot, flying helicopters for a TV station,” says Sean Greenwood, president of Canadian UAVs in Calgary. Today he owns and operates five drones, which monitor and visually inspect oil pipelines and other energy infrastructure facilities.

Though he loves flying, Mr. Greenwood says he saw more of a future in remote-controlled piloting than being in the cockpit. He is now doubling the size of his 10-person company.

“My focus changed to drones because of changes in regulations [which increasingly require some expertise to operate unmanned vehicles],” Mr. Greenwood says.

“I also changed focus because of the speed at which the technology was evolving and my understanding that if I didn’t get ahead of the industry, I would be rolled over by it,” Mr. Greenwood says.

While a pivot can be challenging, it is also worthwhile, and not just for the money, Mr. Sax says.

“I love the fact that we’re doing things that have never been done before,” he says.